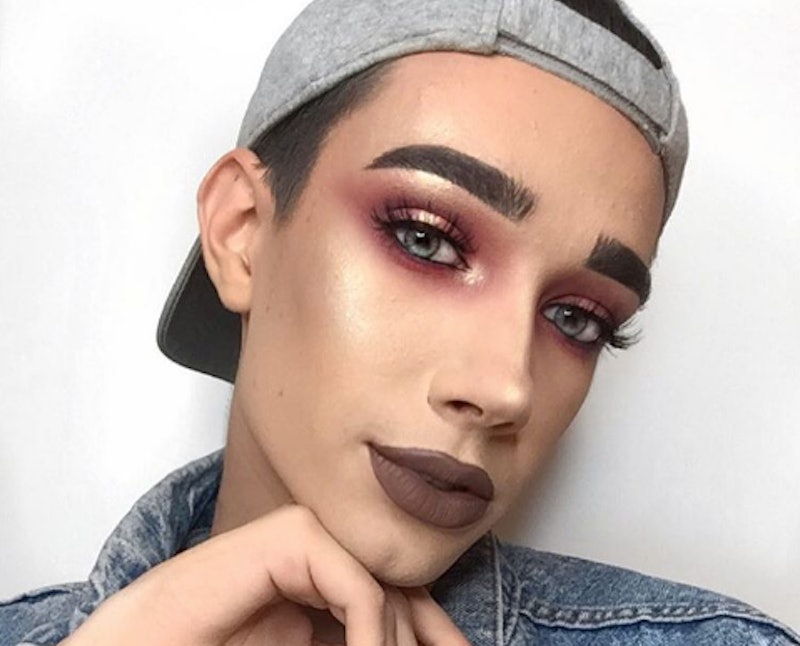 Get ready for some exciting news. James Charles has just been named CoverGirl's first ever male CoverGirl and will be starring in their upcoming mascara campaign. The brand is breaking boundaries, and they've picked a pretty talented makeup artist to come along for the ride. Who is the 17-year-old YouTuber? He might not be a household name just yet, but something tells me that he will be soon.

According to Huffington Post, it was only a year ago that Charles started his Instagram page. In just that short time, the social star has gained almost half a million followers and created just about every makeup tutorial you can imagine. It's clear to see from the images that he's one talented teen, but now the entire world is about to know his name. Charles was just named CoverGirls' very first male CoverGirl. According to the company's Instagram, he'll be starring in one of their next mascara campaigns.

This is pretty major, if you ask me. In the company's 55 year history, there has never been a male star in one of their campaigns. Stars like Sofia Vergara and Katy Perry have worked with the brand, but nothing quite like this. The groundbreaking news was first announced on Perry's Instagram, before Charles took to his own social page to share the exciting news with his fans.

“All of our CoverGirls are role models and boundary-breakers, fearlessly expressing themselves, standing up for what they believe, and redefining what it means to be beautiful,” CoverGirl said in a statement to Huffington Post. “James Charles is no exception. One year ago, he boldly chose to launch his Instagram to the world, using transformative, dynamic makeup looks to showcase the many facets of his personality, serving as an inspiration to women, men, guys and girls who might have been afraid to do the same.”

At the age of 17, Charles is breaking boundaries and doing it in style. From everyday glam to eye looks that are packed with color, the social star can do it all. Don't just take my word for it though. Here are some of his different makeup creations that prove just how talented he is.

I could look at this all day long and not get bored.

Who needs rainbow highlight when you have this?

This couldn't get any more perfect.

Ugh. Those brows are #goals.

Charles is my hero.

How cool is this!

Whoever said it wasn't easy being green was lying.

To say that Charles is talented would be an understatement. I can't wait to see where this opportunity takes him!