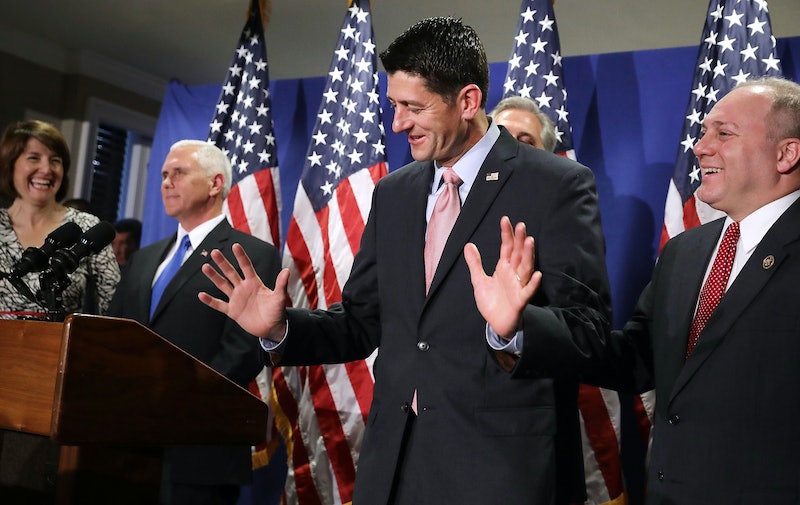 On Tuesday morning, via his retaliation mode of choice, Donald Trump unleashed a tweetstorm in which he assailed top GOP leaders for their supposed disloyalty toward him. Trump complained that the party is abandoning him in his moment of need after House Speaker Paul Ryan's announcement Monday that he would no longer defend him. But Trump would do well to be reminded where the root of the schism lies: with him.

It is Trump's own rhetoric, tactics, and overall behavior in this election that have driven a wedge within his party. And for many, his most recent comments were too much to ignore any longer. Last week, audio of Trump during a 2005 Access Hollywood appearance, during which a hot mic caught him making lewd remarks about women, was published. It may have done more damage than any other incident thus far during an incredibly contentious and scandal-filled campaign. The tapes caused many top party members to finally pull support for the candidate. Conservative pundit Glenn Beck even said that not voting for Trump and allowing Hillary Clinton to win is a "moral, ethical choice" for Republicans.

On Monday, Ryan announced he would no longer defend Trump — though it is to be noted that he never actually rescinded his endorsement of the candidate. With less than a month until Election Day, Ryan said that he would refocus his efforts on down-ballot races and maintaining Republican control of Congress. The announcement set off a firestorm of reactions within the party, and was presumably the catalyst for Trump's unhinged tweet parade Tuesday morning, wherein he simultaneously condemned the party for not supporting him and rejoiced for being freed from its "shackles."

The core issue at stake for the GOP is seats in Congress. With their actions, Ryan and other Republican elite have essentially conceded that the White House is unattainable for them this year. They have pivoted to focus on their only stronghold in national government: the party's majorities in both the House of Representatives and the Senate. This is an act of self-preservation on the part of many Republican incumbents locked in tight congressional races. Senators Mark Kirk, Kelly Ayotte, and John McCain have their seats at stake because of Trump, and all pulled their support for the nominee after the new tape surfaced. By continuing to stand by him in an attempt to preserve party unity, I believe they would be signing their concession speeches, and not leave much of a party to keep unified.

But Republicans can't play innocent in this whole ordeal either, and I can't feel too sorry for these latest Trump targets. By letting him get to this point, they have shown to me that they didn't care enough to distance themselves from Trump's rhetoric until it was clear that it would have a significant effect on the party's standings in Congress. They stood by him as he made disparaging remarks about Muslims, Mexicans, and Gold Star Families, and this wasn't even the first time he made uncouth comments about women. The GOP is finally doing what it should have done months ago, but it is sure to be too little, too late for many voters.