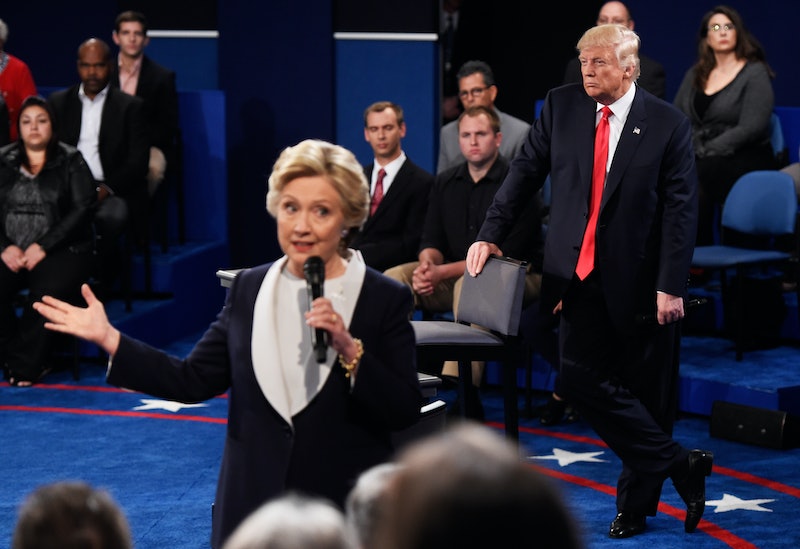 Hillary Clinton and Donald Trump will face off for the last time on Oct. 19, where voters will get to watch the first female presidential nominee discuss her policy proposals and a very orange man spout off about making America great again, or something like that. But what do you do if you want to watch America's favorite reality TV show without a television? Stream the last presidential debate, instead.

For those voters who have cut the TV cord, the 2016 Election has offered plenty of ways to watch the debates in real time (aside from combing through the hundreds of glorious debate memes birthed during the event). Twitter has partnered with Bloomberg Politics to live stream all of the debates, and so far, it's proven to be a very successful platform.

There was an estimated 3.2 million unique viewers watching the Twitter broadcast of the Oct. 9 presidential debate, with 70 percent of the audience under the age of 35. Fittingly, the debate was the second most-tweeted about ever, with Sunday clocking in the highest number of election-related tweets (nearly 30 million) since the cycle began. The number of politica tweets were also up thanks to Trump's "grab them by the pussy" comment. It's clear Twitter's live stream platform caters to an audience that was already hungry for news.

Facebook will also stream the debate, where you can watch rolling commentary from friends and fellow viewers below your screen in real time. According to a release from the Commission on Presidential Debates, members of the media and students at the University of Nevada, where the debate is taking place, will also be using the Facebook Live feature to bring you updates throughout the evening. Additionally, the Commission has stated that digital streams will also be available from ABC News, BuzzFeed News, CNN, C-SPAN, The Daily Caller, Hulu, Huffington Post, NBC, PBS, Politico, Univision, and Yahoo, among others.

As part of the #VoteIRL initiative, YouTube will offer streaming of the debates from Fox News, PBS, The Washington Post, Telemundo, and Bloomberg. The company will also play host to your usual round of on-the-ground reporting from political YouTubers.

With all of these options available, there's no reason to miss the last debate of the 2016 election. If not for anything else, at least you can celebrate when it's over.

More like this
Demi Lovato, Jessica Chastain & More Stars Celebrated The 4th Of July By Protesting
By Jake Viswanath
Twitter Descends Into Chaos Over Boris Johnson’s Resignation
By Sophie McEvoy
Twitter's Reaction To The Great No.10 Exodus Is Comedy Gold
By Rachel Mantock
5 Differences Between YouTube Shorts & TikTok
By Emma Carey
Get Even More From Bustle — Sign Up For The Newsletter