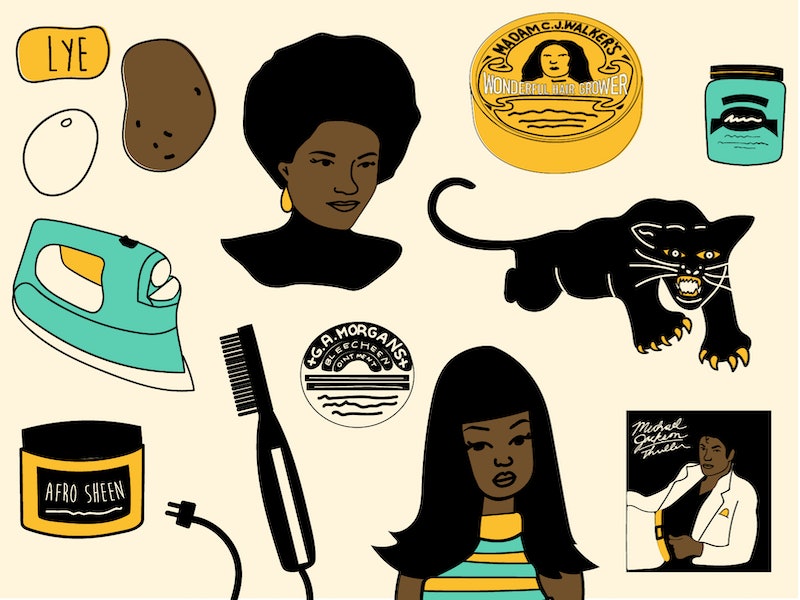 The history of hair straightening in America is quite a lengthy one. Specifically, straightening afro-textured hair is a significant part of the history of Black America: Our hair has been discriminated against, reclaimed, re-discriminated against, and re-reclaimed repeatedly throughout centuries. When we first arrived in North America, our unique texture was compared to wool and deemed unsightly. Now, the texture of our fragile tresses fuels over $500 billion in the hair industry. The politics over how we wear our hair often rule the headlines.

Beyonce wasn't the first one to refer to Becky's hair as "good;" straight, fine-textured hair has been considered superior to our kinky strands centuries before the birth of Lemonade. I once lived by the standards of this so-called good hair — flattening each of my curls as straight as possible, by any means necessary, no matter how badly this type of subtle, systemic racism was damaging my natural hair.

Understanding the importance of the hair freedom we're slowly starting to experience within black hair community can only be done by first understanding the history of straightening afro-textured hair. Here's a breakdown.

According to a report from the BBC, African hairstyles were considered a means for spiritual interaction with God due to its proximity to the skies. In Africa, you could tell a lot about one's identity from their hairstyle: Styles varied from tribe to tribe, and women in mourning often opted for a subdued style.

DIY hot combs began to be developed around Europe and America.

After the Emancipation Proclamation was declared, slaves were free as of Jan. 1, 1863. Still, Sherrow's Encyclopedia of Hair notes that, post-slavery, blacks used a mixture of lye, potato, and egg to straighten hair. This often lead to severe burning of the scalp.

Erica Feldman has mistakenly been credited for being the first to use an ironing device on her hair in many sources, but this article from Racked proves this history is a bit more uncertain. What historians can confirm is that, around 1872, Erica Feldman was at least using the ironing device that Marcel Grateau created in the same year. His tool was responsible for the Marcel Wave, which used heated rods to straighten/style hair without causing as much damage.

Though the device had the same smoothing goal as today's flat irons, they were more often identified as hair "tongs." These tongs would be the foundation for many aggressive straightening tools to come that would soon be marketed to black women as a way to achieve hair that appeared to have a European texture. The direct heat can cause irreparable damage to afro-textured hair because the diameter of the curl strand is so fragile.

In 1900, W.E.B Du Bois gave a speech entitled To The Nations of Our World. In it, he remarked, "The problem of the twentieth century is the problem of the color line...which show themselves chiefly in the color of the skin and the texture of the hair - will hereafter be made the basis of denying to over half the world the right of sharing to utmost ability the opportunities and privileges of modern civilization."

In other words, Du Bois predicted that the shade of someone's skin and the texture of their hair would continue create or deny opportunities for jobs, housing, and safety. Over 200 years later, people with afro-textured hair still face appearance-based discrimination.

Annie Malone began developing a hair straightening recipe for afro-textured hair that would make her one of the wealthiest African-Americans at the time. Turned off by the hair loss and damage lye-based straightening techniques caused, Malone instead developed her technique with influence from an aunt who was a well-known herbalist.

Sarah Breedlove, aka Madam C.J. Walker, began using Malone's hair care line to solve her own hair loss and later goes onto work for Malone. According to Biograpy.com, as Breedlove began to learn about hair care products, she was able to treat her own hair loss which would lay the foundation for her now-famous eponymous company.

While sources debate who developed the first true straightening device, the first patented flat iron was developed by Simon Monroe in 1906 and looked like some metal teeth for a comb attached to a handle. These would later be tweaked and become hot combs which would remain the popular at-home straightening technique in Black American households well into the late '80s.

The combs were heated by the flame of a stove, then placed directly on the hair to flatten the curls, which made the risk of accidental burns fairly high.

Isaac Shero conceptualized the idea of pressing two hot plates together to achieve straight hair. Although Shero didn't formalize his invention, according to the aforementioned Racked's article, the flat irons of today are modeled after his original notion. Shero's invention would become remodeled throughout history and become a popular at-home straightening method for fine textured hair.

As beauty trends changed with the innovations at the time, bone-straight hair would become incredibly popular and the flat iron made it possible to achieve it, but these hot metal plates were as damaging to afro-textured hair as the hot comb.

Madam C.J. Walker became first black millionaire with her invention of "Madam Walker's Wonderful Hair Grower" According to A'Lelia Bundles, Walker's biographer and great-great-granddaughter, the product was "originally designed was an ointment designed to heal dandruff and other scalp infections caused by infrequent hair washing." Although this was never intended to be a straightening treatment, Bundles tells Bustle that agents who worked for the Walker company were trained in hot comb use.

Rastafarianism is spread after Marcus Garvey's release from prison, encouraging Black Americans to keep their hair in its natural state with these words in one of his famous speeches: "Don't remove the kinks from your hair. Remove them from your brain."

"This was my first really big step toward self-degradation: when I endured all of that pain, literally burning my flesh to have it look like a white man’s hair. I had joined that multitude of Negro men and women in America who are brainwashed into believing that the black people are “inferior”—and white people “superior”—that they will even violate and mutilate their God-created bodies to try to look “pretty” by white standards.”

Straight hair becomes overwhelmingly popular in movies and popular culture. Black Americans continue to manipulate their hair at great lengths to keep up with pressure and trends. In 1968, as Refinery29 reports in their history of black hair, Diahann Carroll becomes the first Black American to star in her own series, but her hair was kept straight. Being the first in her own series, there is no doubt that people looked up to Carroll and, as is the case with many celebrities, thought looking like her (i.e., having straight hair) would further their own success.

"Black Francie", the first black doll issued by Mattel, is introduced. She wears her hair long and straight and shares the same molding of her head as the "White Francie" doll.

Barbie gets her first black friend, Christie, a Barbie doll that was essentially a white doll painted brown, as the Telegraph reported.

Activist Kathleen Cleaver speaks out about Black American hair and the flawed concept of beauty in America. She would become a champion for anyone who wants to wear their hair natural.

The rise of afros grows alongside the rise of the Black Panther Movement. Straightening treatments, hot combs, and irons are criticized as oppressive tools that shame blacks about their natural looks.

Creating an afro requires a lot of hair manipulation: Hair must be thoroughly picked by metal, sharp teeth of a comb which can cause damage when hair is dry or not properly protected. To help black Americans achieve a shapely afro, products like Afro Sheen by Johnson & Johnson were added to keep the curls loose and knot-free, becoming one of the first of many future products made specifically for afro-textured hair in its natural state.

Texturized relaxers start being commercialized by mainstream companies like Revlon and become competition for Johnson & Johnson. The types of perms created by these relaxers are responsible for the Jheri Curl. Though the hair isn't fully straightened in these styles, the products chemically relax the natural kink into a less textured curl that was becoming popular at the time. The perms allowed blacks to wash-n-go. In 1982, Michael Jackson wore a Jheri Curl on the cover of his Thriller album.

Johnson & Johnson releases a no lye formula relaxing treatment, creating a more gentle technology for the scalp which decreases the likelihood of burns.

The early '90s see a resurgence of the quest for black identity through hair. Black arts notably birthed the bohemian "neo-soul" hairstyles of the mid-nineties.

A study is conducted revealing poor correlation between the usage of hot combs and the onset of alopecia concluding that follicular degeneration syndrome (FDS) is a distinct form of scarring alopecia.

A class action lawsuit against Rio Hair Naturalizer System lead to the removal of the product after the acidic chemicals were found to cause scalp damage and hair loss in thousands of consumers.

A study published in Black Women's Health finds a link between the usage of chemical relaxers and fibroids as mentioned in the findings of this NCBI study. However, relaxers still experience a rise in sales thanks to stick-straight 'dos of Black celebrities like Aaliyah.

In September 2009, black Barbie is revamped to have African-American features and curly hairstyles. The new dolls — Grace, Trichelle, and Kara — have typically African features with and afro-textured hairstyles.

Viola Davis wears her hair in an afro to the 84th Academy Awards and ignites a long overdue conversation about the misrepresentation of black American hair in film and television.

According to a consumer report by Nielsen, the black hair industry could reach $1.3 trillion in 2017 and many of those sales, as those with afro-textured hair must know, are to straighten and loosen the natural kink of our hair.

Also in 2017, NPR reported on the "Good Hair Study" by Perception Institute, which found that while relaxer sales have declined, ""a majority of people, regardless of race and gender, hold some bias towards women of color based on their hair." If this timeline has told us anything, it's that this bias evidence isn't new. It's just finally being talked about.

Note: This article has been edited from its original version.