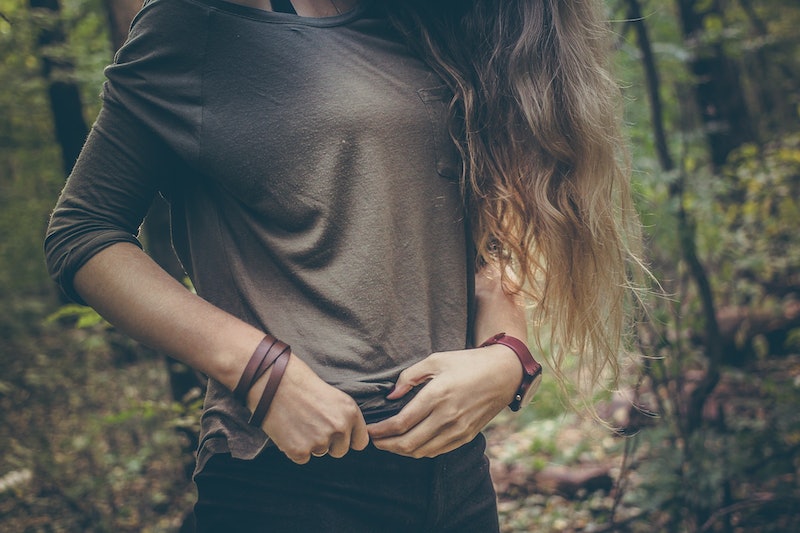 Everyone experiences stomach aches from time to time, and it can be difficult to pinpoint the exact cause of your pain. It's easy to brush it off as harmless, but there are certain stomach issues you should never ignore, as they could be a sign of larger health problems. A one-off tummy ache is never something to worry about, but if you're plagued with persistent issues that may seem harmless, but are constant, you're going to want to get yourself checked out.

If you suffer from some sort of stomach problem, you're not alone. According to the U.S. Department of Health and Public Services, 60 to 70 million people are affected by all digestive diseases. This can include anything from a hernia, to chronic constipation, and even liver disease. Since so many of these symptoms are similar, it can be hard to tell what is cause for alarm and what is just your run of the mill discomfort.

Luckily, I've consulted with an expert to help you be aware of what symptoms you should never left unaddressed. If you experience any of these nine stomach issues, don't ignore them — they could be a signal that something is really wrong.

Common symptoms of indigestion include feeling full fast during a meal, a slicing pain, burning or tightness between your breastbone, and bloating. "If you rarely have indigestion and feel funny or discomfort after a spicy meal, that may go away on it’s own," says gastroenterologist Dr. Gina Sam, MD/MPH over email. "However, if indigestion is a daily occurrence for more than 2 weeks and is coupled with trouble swallowing, fatigue or weakness, then absolutely see your doctor to be sure it isn’t due to something more serious."

Sensitivity to dairy varies person to person, but lactose intolerance can cause diarrhea, nausea, bloating, cramping, gas and sometimes even vomiting. "The challenge with lactose intolerance is that it often leads to calcium deficiency, so it’s always a good idea to see your doctor to create a plan that explores which foods trigger discomfort and which are still okay," says Sam.

If you have cloudy or foul smelling urine that may be brown or pink, you could have a kidney stone passing through your bladder, says Sam. Other symptoms could include a frequent need to urinate, nausea, fever, chills, and even severe lower back pain. Stones usually pass on their own, but the pain can be so severe, that most people need medical attention, according to Medicine Net.

Gallstone pain tends to strike the right side of the upper abdomen, particularly after fatty meals, which trigger the gallbladder to contract. “If the gallbladder is inflamed, any contraction of that nature will be amplified and typically will cause pain to the patient,” says Sam. Gallstones are stones that form in the gallbladder, and they can swell and block the duct into the intestine.

If you're experiencing frequent bouts of heartburn, bloating, and regurgitation, you're likely suffering from acid reflux disease. Although occasional heartburn can be normal, chronic acid reflux can lead to a variety of health complications, including throat and voice problems and issues in the esophagus, according to Health Magazine.

The most common ulcer symptom is a burning sensation or pain in the area between your chest and belly button, and the pain is more intense when your stomach is empty, according to Healthline. These painful sores found in the stomach lining or small intestine can be cured, but they can be severe without proper treatment.

Appendicitis pain is often specifically in the lower right quadrant of the abdomen, but half of those with appendicitis have pain elsewhere, says Sam. "This is why it is important to monitor symptoms closely," she says. "Many of the symptoms are similar to ones associated with other conditions such as kidney stone, Crohn’s disease even ectopic pregnancy." Since your appendix needs to be surgically removed, it's best to see a doctor if you feel severe stomach pains.

“No drug is without side effects and sometimes that includes abdominal pain," says Sam. " Pain medications known as NSAIDs (nonsteroidal anti-inflammatory drugs) such as ibuprofen and aspirin can also cause swelling in the stomach lining and may even lead to ulcers."

If you've got pain or pressure in your back or lower abdomen, accompanied by the frequent urge to urinate or even burning when you pee, you probably have a UTI, according to WebMD. You might be tempted to drink a lot of cranberry juice or liquid to remedy the problem, but you'll want to see a doctor instead, who will give you antibiotics. Left untreated, it could lead to a more severe kidney infection.

If something feels off, it's always best to trust your gut. Some stomach issues can either be symptoms of other more serious issues, or if left unaddressed, they can escalate into something far worse.