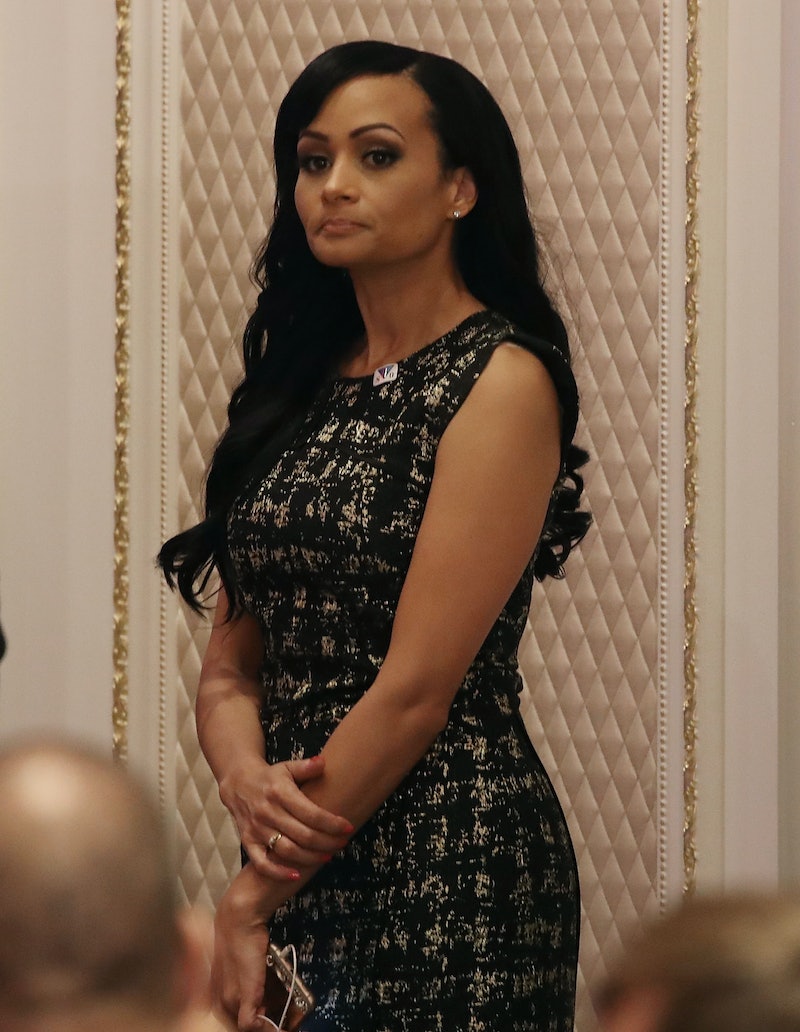 The Oct. 9 presidential debate was a disaster waiting to happen. Just days before, The Washington Post released that awful 2005 recording of Donald Trump bragging about groping and sexually assaulting women. "You can do anything" to women, he said, including "grab them by the pussy." Trump also talked about how he can't help but kiss any beautiful woman he sees — "Just kiss. I don't wait" — and bragged about his futile attempts to "f*ck" a married woman. His comments clearly and explicitly condoned sexual assault, but his national campaign spokeswoman, Katrina Pierson, failed women everywhere when she told Bustle that these were just thoughts.

After the debate, in which Trump continued to write his comments off as "locker room banter," I asked Pierson if she thought the comments from that recording spread a message that sexual assault is OK. "Not at all. I think what two men say to each other in a private discussion doesn’t advocate anything," she responded. But she couldn't be more wrong, and I couldn't have been more disappointed to hear another woman so casually excuse a man's unethical behavior just because he's her boss.

Every two minutes, an American is sexually assaulted. People under 35 make up 69 percent of victims of sexual assault, according to RAINN. When these things are happening at an alarming rate across the country, it's clear these problems will only be exacerbated if a public figure talks about how his celebrity power allows (and excuses) this predatory behavior.

Bragging about sexually assaulting a woman is not something you'd do if you weren't comfortable with sexually assaulting women — Trump's tape made that clear, and Pierson's laughable denial of how his comments are actually dangerous for women was a disheartening look at the brainwashed Trump campaign.

What's more, Pierson suggests to Bustle that she thinks she's above Trump's sexist comments. "Mr. Trump wouldn’t have said those comments if I were on the bus in 2005," she says. But why? Because she's such a strong feminist that Trump wouldn't dare demean women in front of her? That certainly can't be the case — not only because I'm convinced Trump would make those comments in front of anyone, but also because she made it clear that she wouldn't have stood up for women if he did say such things around her. Pierson was incapable of telling me what she would have said to Trump if she heard him making those comments, instead offering that "he’d be extremely embarrassed."

So not only did Pierson tell me that she doesn't think Trump's comments condone sexual assault (they do), but she also admitted that she wouldn't have taken a stand for women if she heard him making those comments. Moreover, Pierson told me what she thinks of women who are no longer supporting Trump after the release of the video:

I would just say to consider thoughts versus actions. These were words from 10 years ago, during a private discussion that many people have, and if you’re private discussions go public, they might be embarrassing, just like anybody else. But I do think, at the end of the day, women need to be more concerned about their neighborhoods, their children, their education, and not necessarily about what somebody said 10 years ago.

This response was particularly striking, because it echoed Trump's apology statement, in which he called the video "a distraction" from the "important issues," implying that sexual assault is not an issue worthy of our attention. Pierson thinks that women shouldn't be worried about "thoughts," even when they're dangerous to our safety as women, because we should instead should worry about our children and neighborhoods. She fails to recognize that the way Trump condones sexual assault is directly affecting children and our neighborhors by perpetuating rape culture and making it seem like this behavior is excusable.

But what do I know? I'm just a woman who's worried about thoughts.