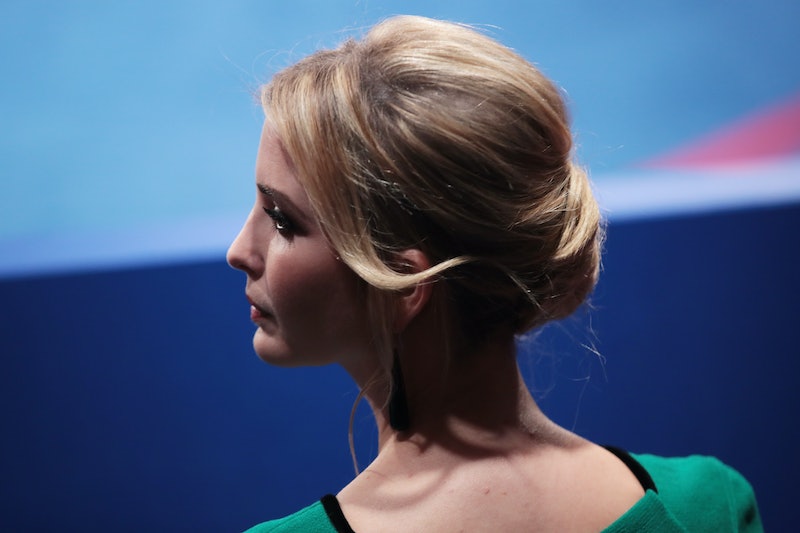 The past week and a half may be the roughest to hit Donald Trump's presidential campaign. After a 2005 hot mic tape of the Republican presidential nominee boasting about grabbing women without their consent was published by The Washington Post — and multiple women subsequently came forward with sexual assault allegations — GOP congressmen and leaders denounced Trump and withdrew their endorsements in droves. As we approach the third presidential debate, many are wondering who will stand by Trump, and specifically, will Ivanka Trump be at the last debate, supporting her father?

Considering she has been one of staunchest advocates for her father, especially when it comes to (attempting) to improve his standing with female voters, Ivanka will likely be at the third presidential debate at the University of Nevada, Las Vegas. She was by his side when he presented his maternity leave policy in September and joined female Republican members of Congress to promote the program. She also gave one of the most prominent speeches of the Republican National Convention in July, introducing her father before he gave his nomination acceptance speech. It is little wonder that Ivanka has often been considered the "secret weapon" of the Trump campaign.

Moreover, she has played a key role in some of her father's previous debates. An Associated Press report noted that Trump chose to "huddle" during the commercial breaks of the Republican primary debates with Ivanka. She was very present at the first and the second presidential debate, even though the latter came just two days after the publication of incriminating tape of Trump's conversation with then-Access Hollywood host Billy Bush about his desire for women and "grab[bing] them by the pussy."

The bigger question may be whether or how Ivanka will address the new slew of sexual assault and inappropriate touching allegations regarding her father. She has yet to make any public statements about the tape or the women who have come forward as she campaigned for her father since these stories broke. "What I can uniquely talk to all of you about is my father as a personal mentor and a role model to me as a great dad growing up," Ivanka said at a campaign event last week in Pennsylvania.

Whether she will say anything more specific or critical remains to be seen.