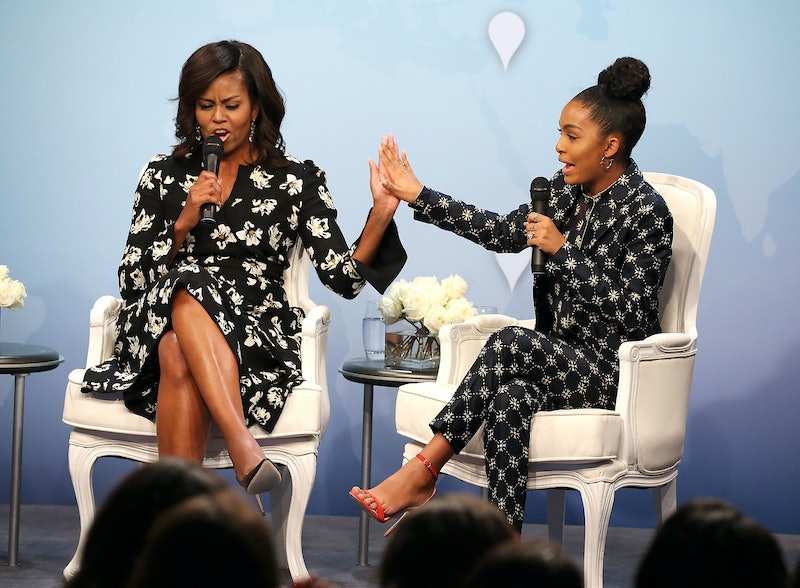 On Tuesday, the U.S. celebrated International Day of the Girl, a United Nations-driven campaign to advocate on behalf of young women and girls around the world. In the U.S., the annual celebration included participation from First Lady Michelle Obama, philanthropist Melinda Gates, Glamour magazine, and other recognizable figures. If you're a fan of girl power, which you ought to be, then the tweets and messages from International Day of the Girl are just what you need to get through this week.

FLOTUS used the international day to highlight her Let Girls Learn initiative on Wednesday. The campaign, launched last year, has already generated investments of several billions of dollars for girls' education around the world. Meanwhile, the White House also promoted POTUS' International Day of the Girl message with the fitting #DadsandDaughters hashtag, meant to start a conversation about men's role in furthering education for young girls.

According to the UNESCO Institute for Statistics, a United Nations organization, some 15 million girls of primary-school age — compared with 10 million boys — will never have an opportunity to get an education. In addition, a girl under 15 years old is married every seven seconds. The numbers are startling, but the messages from Wednesday's recognition of International Day of the Girl are hopeful.

FLOTUS called on girls from around the world to tell their stories on Wednesday. When it came time for her to speak, Mrs. Obama delivered sound words of wisdom and inspiration. She spoke from her own personal experiences.

Black-ish actress Yara Shahidi attended Obama's celebratory event. She shared her own experience — and she should probably say it one more time for the people in the back.

Karlie Kloss is an angel in more ways than one. The Victoria's Secret model and Taylor Swift squad-member shared a photo with students from her Kode with Klossy summer camp. Kloss is an avid coder herself and has worked with New York City's Flatiron School to get young girls involved in the field.

The potential next POTUS has had more than her fair share of iconic quotes about women's rights during her career. (If you're not sure what I mean, google, "Women's rights are human rights.")

On the other side of the aisle, former First Lady Laura Bush shared the success of the George W. Bush Presidential Center's First Ladies initiative, which works with first ladies around the world to help them make the most of their position. Some things truly are bipartisan, folks.

Facebook executive and Lean In author Sheryl Sandberg also seems optimistic about the future of the world's girls. "When women and girls succeed, we all succeed," she wrote.

With these messages and others, International Day of the Girl highlighted the success of various initiatives and the goals of future work. Much of that progress is a result of, or at least inspired by, the work of Wednesday's strongest voices. And though steps forward have been achieved, progress cannot stop here.