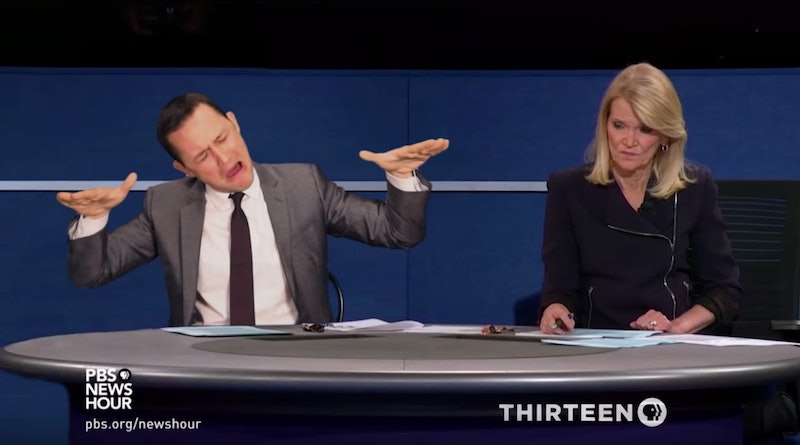 You may have thought that Hillary Clinton and Donald Trump's Dirty Dancing town hall remix was the best mashup to come out of this year's debate season. Think again. Joseph Gordon-Levitt hosted this debate Songify remix, and it's the perfect summary of the debate if you didn't have time to watch Sunday night. It's also far more enjoyable.

Gordon-Levitt takes Anderson Cooper's spot at the moderator's table next to Martha Raddatz and sings out a soulful couple of questions to the auto-tuned Clinton and Trump. The song, ostensibly written by Gordon-Levitt and the music video group The Gregory Brothers (who appear as undecided voters in the audience), makes fun of the candidate's answers by splicing them together and adding a beat.

Take this exchange for an example:

Gordon-Levitt: Welcome, now it's time to see who relates to ordinary people at the town hall debate.

Auto-tuned Trump: I've got respect for women. Nobody has more respect than I do. You've got ISIS chopping off heads, drowning people in steel cages too.

Auto-tuned Trump: It's locker room talk. It's one of those things when you have so many bad things happening.

To really appreciate it, though, you need to hear the tune and the beat — not to mention the rhyming. Perhaps Clinton's response can give you an idea of the catchiness: "We all heard what he does to women. We've seen him rate them from one to 10. He has also targeted immigrants, Latinos, and African-Americans."

Between every verse is the catchy refrain, "Who's going to work it out, baby, who's going to work it out?" as well as "What you gonna do?" From there, Clinton takes over saying, "Make college affordable." And Trump, "She's a deplorable, irredeemable." This repeats throughout the piece, and when you hear it in time, it's extremely catchy. The other topics they cover are taxes and coal. But don't worry, they didn't leave out Ken Bone — he makes a cameo.

Gordon-Levitt and the Gregory Brothers even penned an op-ed on the video for The New York Times, noting that it was a "first lady turned senator turned secretary of state versus a landlord turned reality TV host turned semiprofessional birther turned amateur horror movie lurker who creeps up behind you." And yet that's the new normal for American politics, which might make you wish for something other-worldly:

Maybe it's just that so many wish this election were imaginary. So we have nudged last night's spectacle across the threshold of the fantastic, and fancied a debate in song. A debate where Hillary Clinton's and Donald Trump's voices rose together in harmony. Where they danced in unison. And where Joseph Gordon-Levitt magically replaced Anderson Cooper at the moderator's table — because that's also how surrealism works.

So if you haven't stopped reading to go watch it now, do so. It's really all the info you need from the debate, and it's hilarious to boot. Fingers crossed there's another installment after the final debate.