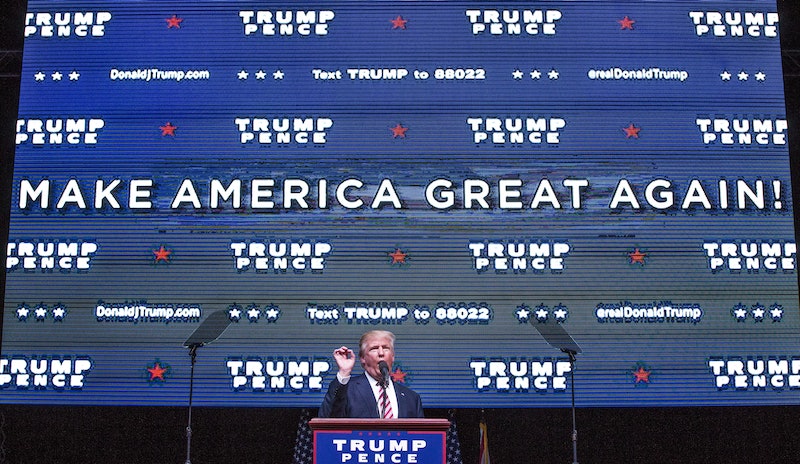 Attack ads during a presidential campaign are nothing new. They're to be expected, really. One candidate points out the other's faults and claims that he's going to be better; the other responds with a rundown of their opponent's questionable choices from past terms. However, this year, one candidate has taken campaign ads to a new level. Republican presidential nominee Donald Trump has released a terrifyingly totalitarian ad that blows all of the normal sorts of attack ads out of the water.

First, he presents a list of the foreign policy challenges facing the next president, like Iran, North Korea, and the like (notably absent is Russia — Trump doesn't seem to see the country as a threat, despite his running mate's statements to the contrary). You know this type of violent, war-focused video is meant to incite fear. Next comes the direct attack on Hillary Clinton, blaming her for the world's problems and questioning her "stamina" with photos and videos of her displaying signs of weakness. This could easily be something out of The Hunger Games or the last couple of Harry Potter books, but more than that, it's part of a widely recognized phenomenon in political science.

Propaganda in totalitarian regimes, or countries where the government has unlimited power, is used to incite a feeling of insecurity amongst the populace, which the regime then uses to keep the people under control. You can watch the full video here:

But the real kicker is in the last frame:

This idea of a totalitarian ad isn't just an abstract concept, either. It has, unfortunately, been employed to great effect in modern history, as Nazi leader Hermann Goering explained in the Nuremberg Trials:

Naturally, the common people don't want war ... but, voice or no voice, the people can always be brought to the bidding of the leaders. That is easy. All you have to do is tell them they are being attacked and denounce the pacifists for lack of patriotism and exposing the country to danger. It works the same way in any country.

The situation he's describing, of course, is a bit different. Although Trump has made statements about war that are rather frightening for those who would prefer to avoid it, no one is claiming that he or his campaign is actively garnering support for a war (unlike, for example, what the Bush administration did). Instead, he's trying to place himself as the authoritarian leader at the head of the government whose mandate is based not on trust, but on fear.

This is far from the first time that Trump has done or said something to show that he doesn't exactly understand the basic concept of a democracy. He's complained about the free press, saying that libel laws would be much stronger if he became president so that he could sue the media sources that printed something he didn't like. A censored media was, for example, typical of the communist regimes of Eastern and Central Europe during the Cold War — but never of the American democracy. And during the second presidential debate that he would put Hillary Clinton in jail if he won — a strategy frequently used by authoritarian leader Vladimir Putin, but, again, never deployed in the American democracy.

Former Attorney General Eric Holder, a man who would know a little bit about the position that Trump said he would so blatantly misuse, summed it up well:

You know what they call a president who oversteps his power, jails his opponents, and frightens his constituents into line? A dictator. This latest ad by Trump proves the point yet again, and come November, we need to keep democracy in place by using it to defeat him.