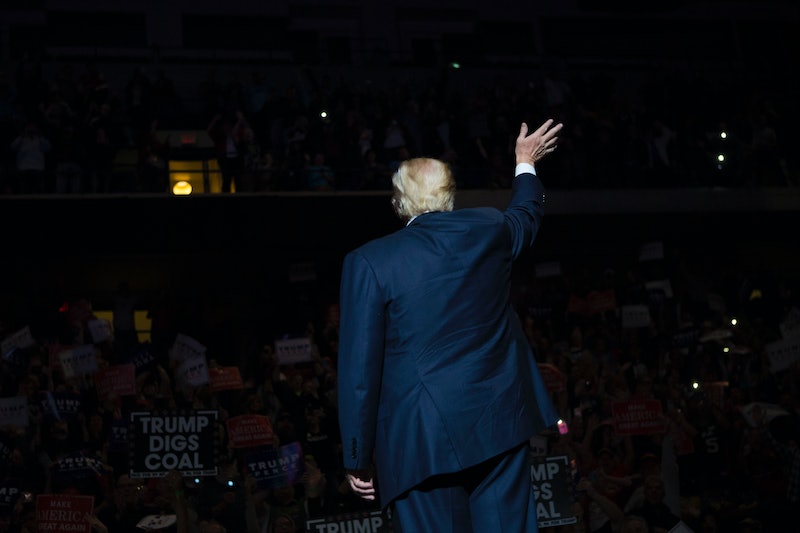 Some moments it seems like we've seen it all this election — and then you turn the corner, and there's something else that makes your jaw drop. But this time it's not another ridiculous bombshell from Donald Trump's past, but instead a piece of what can only be called performance art, the goal of which is to stop him from getting elected. These Donald Trump lookalikes kissing each other put Trump's narcissism on full display, and we have this election (and the man himself) to thank for this masterpiece.

While it's definitely one of the funniest ideas to have come out of this election, they actually have a serious point. Trump might say nice things about people at times (even including dictators), but his main focus is and has always been himself. The campaign isn't one of policy or ideas — it's about Trump, with everyone and everything taking a backseat to the persona that he never steps out of.

In order to make that point in very graphic form, a couple of Trump lookalikes spent the day kissing each other in Union Square, Trump Tower, and Washington Square Park. If you happen to be in or around New York City, you can go see for yourself. Otherwise, you can admire the image from the safety of the other side of a computer or phone screen:

This brilliant plan comes to us from the geniuses over at "I'm With Her BC He's Cray," Jessica Walsh and Timothy Goodman. Both designers, these two have started an initiative to try to draw people to the Hillary Clinton cause not because of her inherent quality as a candidate, but because, as they say above, her opponent is cray. They've also made an excellent (and adorable) video on the subject, this time using kids to really hit us all in the feels:

In a campaign that has been so full of vitriol, it's a breath of fresh air to see someone making a point with humor instead. It doesn't take away from the seriousness of the issue; it just frames it in a different way. Walsh and Goodman's website draws on that principle — they have something serious to say, but they're saying it with gorgeous design, color, adorable videos, and, yes, Trump lookalikes kissing on the streets of New York City.

They've also picked their timing appropriately. One of their goals is to get people to register to vote, and they brought out their kissing Trumps strategically as voter registration deadlines approached in several swing states.

Walsh and Goodman don't want you to lose your chance to help keep Trump out of office, and they're hoping their Trump lookalikes will motivate you to act.