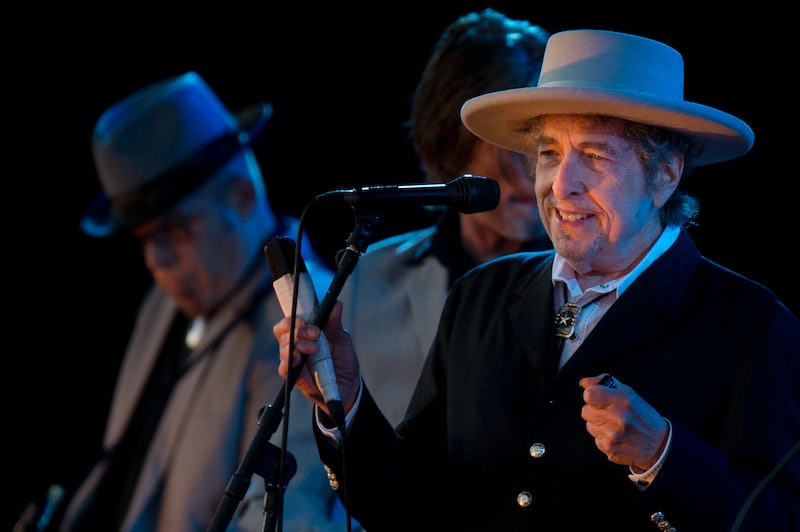 The Swedish Academy announced that the prize had been given to Bob Dylan for "having created new poetic expressions within great American song tradition." He is the first American to win since Toni Morrison took home the prize in 1993. Sara Danius, permanent secretary of the Swedish Academy, said Dylan was chosen because he was "a great poet in the English tradition."

The win was a surprise for many who were expecting the Swedish Academy to give the prize to authors like Don D, Haruki Murakami, or Joyce Carol Oates. Bob Dylan was named as an outside contender for the prize, but many believed Ngũgĩ wa Thiong'o would be taking home the honor.

The 75-year-old rock legend, whose real name is Robert Allen Zimmerman, began his musical career in 1959, and became known for his poetic hits like "The Times They Are A-Changin'," "Like A Rolling Stone," "Mr. Tambourine Man" and more.

Alfred Nobel — who provided for the five Nobel prizes (Physics, Chemistry, Medicine, Peace, and Literature) in his will in 1895 — left fairly vague instructions for the selection of a literary honoree. According to the Nobel Prize's official site, he said only that the winner should have produced "the most outstanding work in an ideal direction." What an ideal direction means was left to the discretion of the Swedish Academy, though they also adhere to the direction Nobel specified for all five prizes — that the work should have bestowed "the greatest benefit on mankind."

Peter Englund, the Permanent Secretary of the Swedish Academy, had a much more detailed answer on the question of how they choose a Nobel Prize in Literature winner. He says the Nobel Committee — which has 18 members, seven of whom comprise the Nobel Committee on Literature — review the nominations in February. They narrow them down to a shortlist of 20 names, then they narrow it down to just five names. Those finalists are approved in May, and the committee members spend the summer learning about the authors. When the Academy meets again in September, they begin discussing the winner. They usually decide by early October.

The award will be presented to Bob Dylan on Dec. 10, the 120th anniversary of Alfred Nobel's death.

More like this
16 Novels That Paint A Realistic Portrait Of Abortion
By K.W. Colyard
5 Gripping Books To Read From Women’s Prize For Fiction Winner Ruth Ozeki
By El Hunt
Olivia Rodrigo’s Song Dedication To 5 SCOTUS Justices Sent A Strong Message
By Grace Wehniainen
Eurovision 2023 *Might* Be Held In The UK
By Sam Ramsden and Rachel Mantock
Get Even More From Bustle — Sign Up For The Newsletter