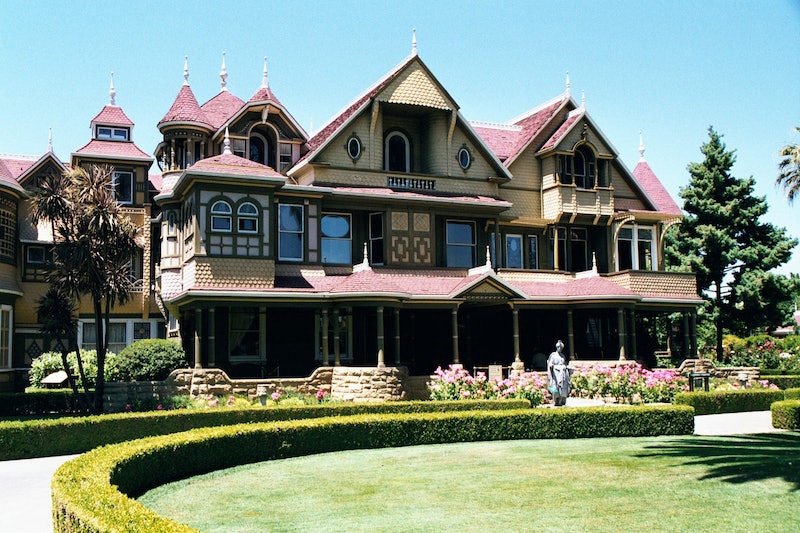 If you're curious about curiosities, you may have heard that a new room was discovered in one of America's most bizarre landmarks. If, however, your hobbies are a little easier to explain to polite company, you're probably just wondering what the Winchester Mystery House is in the first place. The short answer is that it's a mansion formerly belonging to Sarah Winchester, a widow with access to the massive Winchester rifle fortune. The long answer? Well, that takes some explaining. So let's take a trip down one of history's weirder paths, shall we? It seems like the right time to do it.

Sarah Pardee, who would eventually become Sarah Winchester, was born in the mid-19th century in Connecticut. She married the son of the manufacturer of Winchester repeating rifle in 1862. Four years later, however, Sarah was heartbroken after her infant daughter passed away, and when her husband died suddenly from tuberculosis in 1881, her depression worsened. According to rumor, Sarah visited a psychic who said her family was cursed by the spirits of everyone killed by Winchester rifles — an alarming prospect in the first place, but considering the rifles' use in the Civil War, that's quite a few spirits to worry about.

She and her sister moved to San Jose, Calif., where Sarah used the vast inheritance she received from her husband (more than $20 million, a virtually limitless amount at the time) to begin construction on a mansion. But this isn't your ordinary millionaire's estate. For one thing, construction never stopped.

It's possible that Sarah's obsession with building and rebuilding was driven by grief and an interest in architecture. According to rumors, however, she was following the New England psychic's instructions: Supposedly, Sarah was told that the only way to avoid being the curse's next victim was to construct a house for herself and the angry spirits. As long as she never stopped building — or so the story goes — the spirits would leave her alone.

Whatever the reason, though, the house was continually renovated until Sarah's death in 1922. By the time she passed away, the Winchester House had become an eccentric landmark. Built in the Victorian style, the mansion was seven stories tall, with at least at least 161 rooms; it included 13 bathrooms, six kitchens, 47 fireplaces, 2,000 doors, and 10,000 windows. (Today, after all the renovations and several earthquakes, the mansion is four stories.) The layout is labyrinthine — some staircases lead nowhere, secret passageways run through the halls, some doors open into walls or dead space, and all sorts of other architectural oddities add to the strangeness of the place.

Yep, that's a door that just opens up into empty space on the second floor. Yep, it's called the Door to Nowhere. See what I mean?

What's more, the Winchester House is so elaborate that nearly a century after Sarah's death, they're still finding rooms. On Monday, a local ABC News station reported that a new room had been discovered and would be open to the public. The home's preservation team found the room, an attic space that was boarded up after Sarah was trapped in the room during a 1906 earthquake. Inside the room, the team found a pump organ, Victorian couch, dress form, sewing machine, and paintings.

The moral of the story? Just when you think the world can't get any weirder, it does.

For information about visiting, check out the Winchester Mystery House's official website.

More like this
What Is The Forest Personality Test? The TikTok Trend, Explained
By Georgina Lawton
This Creepy TikTok Trend Encourages Out-Of-Body Experiences
By Kaitlyn Wylde
TikTok’s #NapkinChallenge Is The Chaotic Good You’ve Been Missing
By Sophia Moore
I Tried The $20 TikTok Viral Oishii Strawberries — Here's What I Thought
By Sophie Hanson
Get Even More From Bustle — Sign Up For The Newsletter