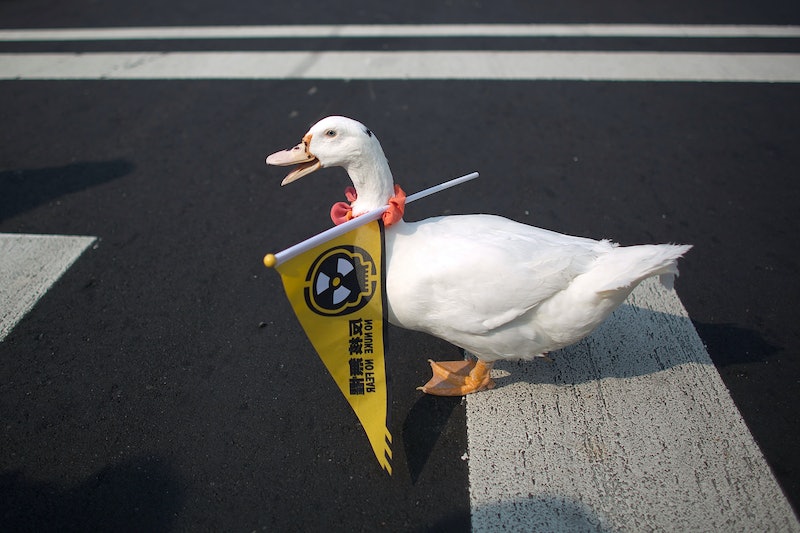 At the Hague summit Monday morning, Japan and the U.S. announced a nuclear deal. According to officials from both countries, Japan has agreed to transfer 700 pounds of its weapons-grade plutonium to the U.S., in addition to a portion of its enriched plutonium. This would have been enough to make several nuclear weapons, but it's a very small fraction of Japan's total plutonium stockpile — less than one percent, according to some estimates.

According a statement released by Japan and America, the agreement will:

Help prevent unauthorized actors, criminals, or terrorists from acquiring such materials. This material, once securely transported to the United States, will be sent to a secure facility and fully converted into less sensitive forms.

This deal comes in the midst of tense international relations over the question of nuclear stockpiles. In the past, Iran has claimed that Japan's possession of a nuclear stockpile shows a double standard — Iran has faced mistrust for its stockpile, but Japan has rarely faced condemnation for the same thing.

At the Hague summit, Iran also confirmed its agreement with the nuclear deal it signed in November.

Both deals have been victories for the President Obama's administration, which has been trying for five years to get major world powers to end their nuclear stockpiles, or at least ensure they're very secure. This push by Obama looks to be one of the reigning successes of his presidency: 13 countries have rid themselves entirly of their nuclear materials, and many, many more have improved security facilities for their nuclear materials.

That said, Japan still plans to put $21 billion into a nuclear reprocessing plant, and China's not too happy about it. "Japan has stockpiled large volumes of sensitive nuclear materials, including not only plutonium but also uranium, and that’s far exceeding its normal needs," said Chinese Foreign Ministry spokesperson Qin Gang on March 11 to reporters.

Since World War II, relations between China and Japan have remained tense, and fears that Japan could create nuclear weapons have intensified China's sentiments.

Even though it will have 700 fewer pounds of plutonium, Japan still retains a sizable nuclear stockpile. According to World Affairs Journal, Japan has 44 tons of plutonium — which is approximately 88 thousand pounds. The 700 pounds Japan conceded to the U.S. is even less than one percent of Japan's total plutonium stockpile.

Given this context, the deal seems more of a symbolic action.