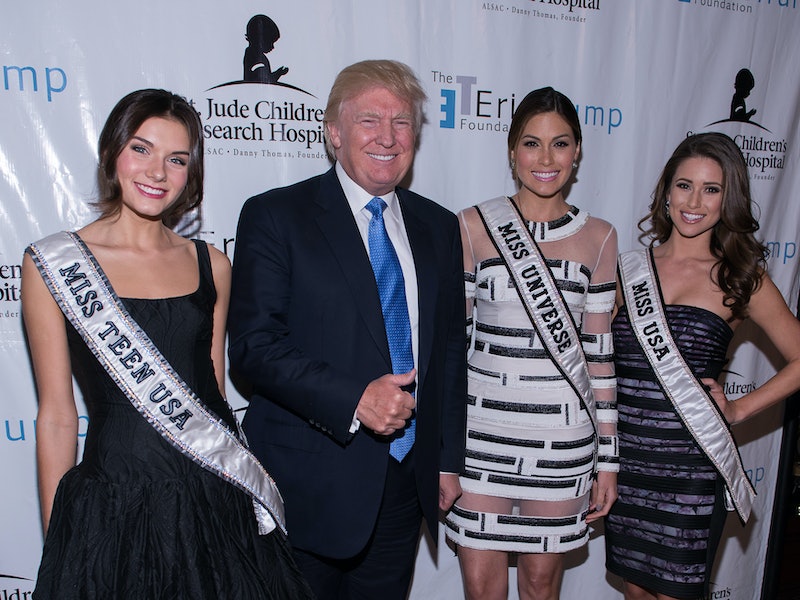 Over the past couple of weeks, Republican presidential nominee Donald J. Trump has become embroiled in multiple allegations of wrongdoing, which look to be rattling his campaign and burying his chances of winning the White House. Most notably, there's the recently released video which, as the second debate's co-moderator Anderson Cooper put it, features Trump bragging about sexual assault. And now, yet another report has thrown the GOP nominee's views on consent under a spotlight ― the latest Trump allegations suggest that age didn't matter when it came to his penchant for entering the dressing areas of the beauty pageants he owned. Bustle has reached out to the Trump campaign for comment.

Here's the basic situation, which was reported by Kendall Taggart, Jessica Testa, and Jessica Garrison of BuzzFeed News. Trump has previously publicly admitted (on Howard Stern's radio show, in fact, which is about as public as things get) to entering the contestants' backstage dressing areas of beauty pageants he's owned, quipping to Stern that "I sort of get away with things like that."

Well, I'll tell you the funniest is that I'll go backstage before a show, and everyone's getting dressed, and ready, and everything else, and you know, no men are anywhere, and I'm allowed to go in because I'm the owner of the pageant and therefore I'm inspecting it. You know, I'm inspecting it, because I want to make sure that everything is good... You see these incredible-looking women. So, I sort of get away with things like that.

You can actually listen to the audio of him saying so here, thanks to CNN's KFILE, which dug up the audio last week. And needless to say, that's distressing enough on it's own ― bragging about entering the women's dressing room because he owns the pageant and can "get away with it" is grotesque behavior, to be frank.

But the additional element of the BuzzFeed report is even more disturbing, as some former contestants in Trump's Miss Teen USA pageant have alleged that he pulled the same move when they were changing ― some of those girls were as young as 15. The Trump campaign reportedly didn't respond to BuzzFeed's requests for comment, but Bustle has reached out to the campaign for comment as well.

According to the report, four different women have alleged that Trump entered the dressing room. One of them ― Mariah Billado, a former Miss Vermont Teen USA winner ― claims he said something to the effect of "Don’t worry, ladies, I’ve seen it all before."

Eleven other former Miss Teen USA contestants contested such accounts, saying they never saw Trump in the dressing room. A former Miss Maine Teen USA suggested that the accusers are "probably lying because they are voting for Hillary Clinton." Billado denies any political interest in the 2016 election.

The accounts are conflicted, and it's still firmly in the realm of allegation. But it is notable that the allegations sync pretty closely with behavior Trump's already openly described on the Stern show, and it comes at such a vulnerable moment in his candidacy. According to polling site FiveThirtyEight's election forecast, he currently sits at just a 13 percent chance of winning in November, and it seems clear that more reports questioning his professionalism and sexual boundaries aren't going to help.