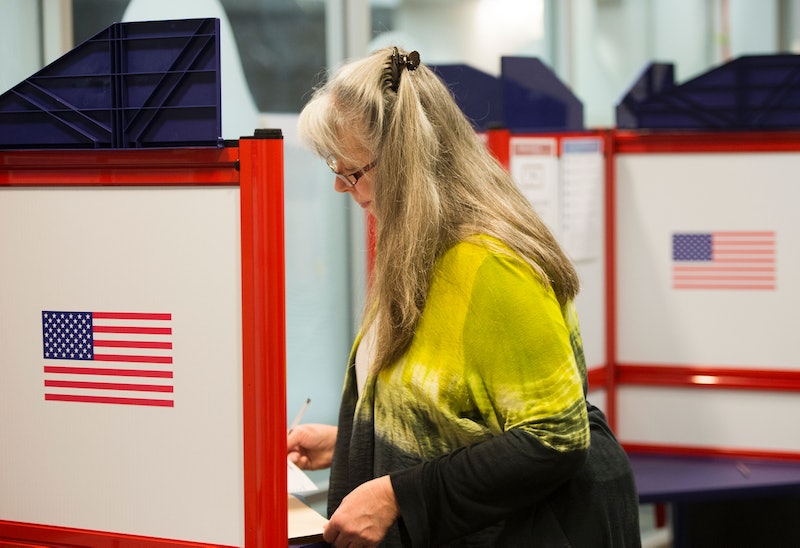 I get it. Even in an election as fraught as this one, there’s something romantic about the idea of voting on Election Day. The buzz at the polls, the tireless poll workers, the stickers. Still, while it might feel patriotic to vote on Election Day itself, understanding the value of early voting is more important than ever, especially in what might end up being the most important election of our lifetimes. Early voting began Wednesday in two key states — ever-swingy Ohio and newly-swingy Arizona. So to celebrate (and advocate), here are a few inarguable reasons you should vote early if you can.

First, life happens. Flat tires. Fender benders. Sick children. Sick parents. Unexpected work deadlines. Friends getting dumped and needing ’round the clock consolation. Any one of these things alone could derail your entire day. If one of these things happen on your way to voting on Election Day, you could be screwed — no makeups on Nov. 9. But if one of these things gets in your way on, say, Oct. 25, it’ll still be a royal pain, but at least it won’t keep you from casting your ballot. Is it as exciting as getting to vote on Election Day itself? Maybe not, but weigh that lack of excitement against the profound disappointment you’d feel if you missed your chance to vote altogether.

But even if you can get to the polling place without the universe interfering, that doesn't mean you're home free. A bureaucratic snafu could still trip you up. Even if it hasn’t happened to you directly, you’ve probably seen it: the poll worker looking through their thick book of names, hunting for one that just isn’t there. “Sorry, I don’t see you in here. Are you sure your registration is correct?”

Best-case scenario, the lost voter hunts around for their precinct, sometimes driving to other polling locations. Worst-case: The voter gets the dreaded provisional ballot given to voters whose eligibility is under doubt. After the election, an official looks at provisional ballots to decide if the voter was or wasn’t eligible — there’s no way to guarantee that that vote is actually counted. (Actually, revise that: Worst-worst-case scenario, your state’s new, draconian voter ID laws prevent you from voting altogether.) If you show up to vote early and hit a bureaucratic speed bump, you might still have time to fix it.

Finally, getting your vote out of the way means that polling places are less packed on Election Day. Long lines at the polls on Election Day are a real, serious problem, especially if you’re a minority. For a moment, let's ignore the fact that other industrialized countries don’t have nearly the same kind of problems with voter lines as we do. Even Australia, which legally requires its citizens to vote (that is, they have to submit a ballot; they don’t have to cast it for anyone), considered a one-hour line in July’s election to be too long. Compare this with lines in Florida from 2012, where some people reported voting lines of seven hours.

So if you have the ability to get to the polls early, that’s one less voter that the polls have to process, making sure there's enough time for people who, for whatever reason, can only vote on Election Day.

There are plenty of other reasons to vote early — it frees you up to campaign on Election Day or work the polls! — but these ones are pretty hard to argue with. So if you live in one of the 32 states that allow early voting, get it done!