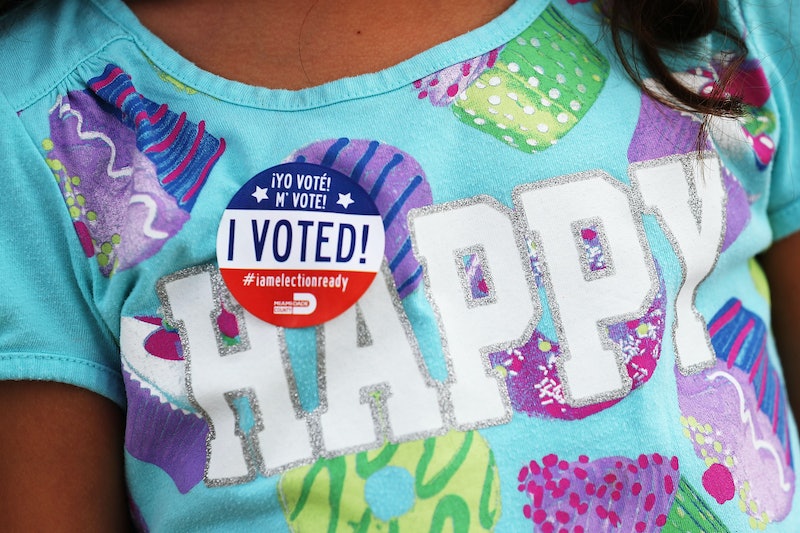 At some point, everyone gets tired of the election. The last month alternatively seems like 10 minutes or 10 years, depending on how sick you are of hearing about it. And the last week alone has had enough drama to fill the entirety of a 2016 edition of Game Change. For some lucky Americans, though, their states allow early voting, allowing them to be done with the election weeks before the rest of us. Early voting has already begun in many states, including ones that are expected to be significant battlegrounds. And those who have already voted are celebrating online.

The New York Times has reported that early voting requests in states like Florida and North Carolina have indicated a slight lead for Hillary Clinton, which includes steep increases in voting requests from Hispanic voters around Miami and Orlando ― though The Times also noted that Florida Republicans have been relatively successful in their attempts to narrow the voter registration gap. This data comes even before last weekend's release of the now-infamous tape in which Donald Trump brags about non-consensual and lewd behavior with women.

While early voters can provide us with some indication of what to expect on Election Day, they cannot determine the outcome on their own. Anything from bad weather to more October surprises could quickly change the course of this election. It's certainly happened before.

Whenever you vote — as long as you do go out and vote — it's easy to be envious of how thrilled people are to get it over with. So find out if your state offers early voting, and take advantage if they do!

In the meantime, at least, we can all live vicariously through the lucky people who can already put the election behind them.

Fresh off that BuzzFeed video about how easy voter registration is, Obama is firmly aboard the early voting train.

Voting early is easy! Apparently, there's free parking! If previous years are any indication, the lines on Election Day will be insane, so if you live in Ohio or another early voting state, definitely give early voting a shot.

I wonder if she has any strong feelings about whether America has ever been great, or whether anyone could make that happen again ...

I'm pretty sure I can guess who he thinks won the debate on Sunday.

Bonus points for the Indiana Jones jacket. Speaking of voting in style...

If you don't dress up to go vote, does your vote even count?

(Yes. Yes it does. Go vote in sweatpants. I don't care. Just remember to vote.)

All The Way From Hong Kong

Hong Kong is 12 hours ahead of the United States' East Coast, so technically, Kristie Lu Stout voted from the future.

I'm Not Crying, You're Crying

103-year-old Ruline Steininger said she never thought she'd see this day in her entire life, and someone is definitely cutting onions somewhere around here.

Just In It For The Sticker?

Adrianne gets the absentee ballot struggle, though many early voting locations do offer stickers if you vote in person.

I'm not pretending I'm not jealous.

If you just sit at home and you don't vote, I don't think you're doing anything good. I think that you're actually hurting the situation.

Whether you vote early, absentee, or on Nov. 8, don't forget to turn out and vote this year! You can register to do so right above.