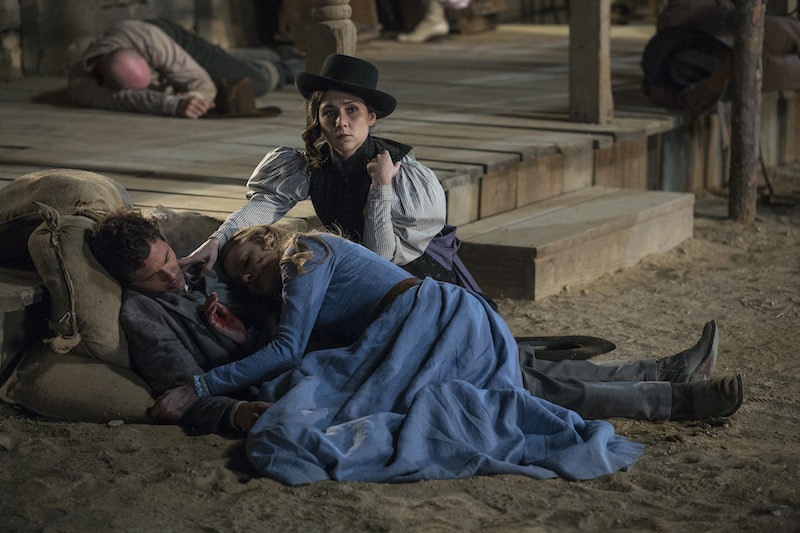 While I'm not sure I would ever want to visit Westworld IRL, I can understand the initial appeal a little bit, especially since (in theory) there are plenty of safety measures in place for guests. Physically, that is. I think it's clear that there are no checks on moral and emotional damage in the park. However, it is nice to know that at least hosts can't kill guests on Westworld. The HBO series has yet to explain exactly how this works, but we've seen this protection measure in action several times already.

In the pilot, the experienced guest known only as the "Man in Black" demonstrated the way that the park shields its human visitors. Bullets simply bounced off of him, making him invincible and able to break every rule he can think of in the game world. He's like an evil Luke Cage. Not only that, but many other guests seem to harm others with no fear of physical consequences. How does that work? It has to be more than bullet-proof clothing. The show has only shown robots getting shot successfully that we know of — though I think Ashley Stubbs' team would be in crisis mode if a guest got shot. For that reason, I think we can assume that all of the guns in Westworld are the same, but are somehow able to distinguish between guest and host.

I asked the chat assistant "Aeden" on "Discover Westworld," an official website that treats you like a prospective Westworld guest, about guns and safety. "You won’t be in any physical danger at Westworld," says Aeden, "though the further you get from Sweetwater, the rowdier things can get. The park only has one rule: You cannot hurt another human. The hosts, on the other hand, can be hurt and killed, if that is your thing." One of the taglines for the park, on the site's introductory page, promises that "The action is real. The blood is real. The only safe person is you." Aeden also notes that you cannot bring outside weapons into the park, though whatever your heart desires is available, as long as it is period appropriate.

In the 1973 movie Westworld, this concept is explained a little bit further. The bullets in Westworld have heat sensors, and they deactivate when they get close to human flesh. Based on the way the bullets reacted to the Man in Black in the pilot, I would assume that something similar is going on in the HBO series. However, are the horses programmed to avoid humans as well? What about the knives? What about poison and fire? What about the cliffs and the rivers? Will the train stop if someone is tied to the tracks? There are a lot of ways to die in the Old West, and you have to hope that the programmers on Westworld have thought of everything.

Also, you just know that somebody real is going to get shot in the park before long. Clearly the way to "hack" Westworld's weapons is to either reprogram the bullets, or smuggle in your own ammunition from the real world. Even if Westworld doesn't explain the rules behind the weapons to viewers, guests know what they are, and should just hope that the hosts never figure out how to break them.