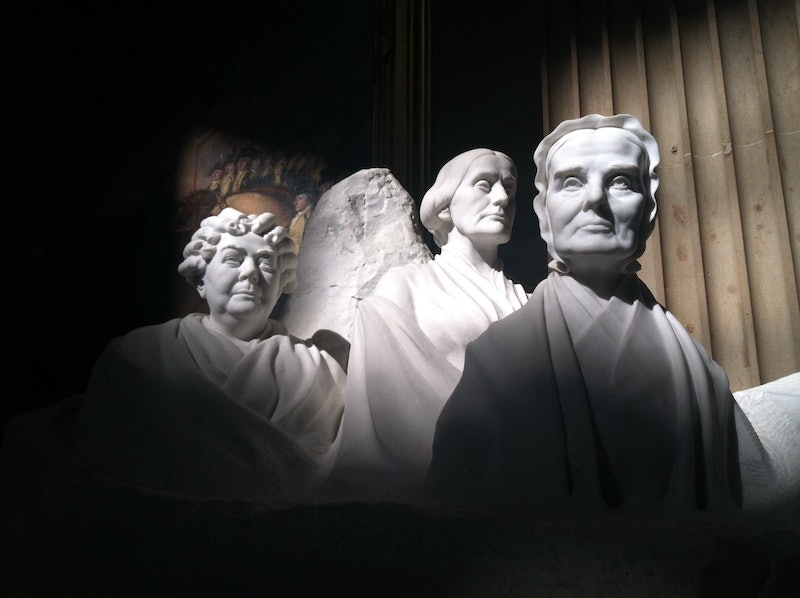 Supporters of Republican presidential nominee Donald Trump started a social media "campaign" on Wednesday to call for the repeal of the 19th Amendment to the United States Constitution, which establishes women's right to vote. Supporters are using the hashtag #RepealThe19th in response to Nate Silver of FiveThirtyEight's recent findings that Donald Trump would win this November's election by a large margin if only the country's men voted — and that Hillary Clinton would win by an enormous margin if only women voted.

A call to repeal the 19th Amendment represents a highly misogynistic viewpoint that is extremely damaging to women's rights and empowerment. While it is probably safe to say that most people, including most Trump supporters, do not believe in abolishing a woman's right to vote in the United States, social media has given a provided a platform that inadvertently helps to almost normalize such an extreme viewpoint by making it a part of our rhetoric.

Prior to the internet, people with such extreme viewpoints were limited in their ability to gain momentum for their message because they lacked an accessible platform through which they could easily reach others with similar viewpoints. However, social media allows people who share discriminatory viewpoints to easily find each other and disseminate their message, giving mainstream attention to something that would normally receive little attention at all. This message, if left unchecked, has the potential to further reach and gain support from people who feel disempowered by the country's status quo, even if they normally would not perpetuate such an extreme viewpoint themselves.

As a result, it is incredibly important to directly combat the #RepealThe19th message. Although it might seem counterintuitive to call for addressing this message on social media and in mainstream media outlets, since it gives it further attention, if the message has already reached the point where it is trending on social media, then it is already highly visible, and direct responses are then needed to counter it. The Washington Post refers to this concept as developing "'counter narratives' that try to undermine the promises of radical ideologies."

In this case, it is important for the public and the media to simply point out the absurdity of the message to repeal the 19th Amendment, remind people that an incredibly small percentage of people actually believe the amendment should be repealed, despite the significant amount of discussion around the issue, and promote messages that directly counter the sentiments of the #RepealThe19th movement.

Many media outlets and Twitter users have already begun to take a stand, both by directly referring to the #RepealThe19th campaign as exactly what it is — complete and utter misogyny — but also by using the message to underscore the importance of voting and ensuring that everyone's rights are protected and preserved.

Individuals advocating to repeal the 19th Amendment may be a very small minority of this country's population, their voice becomes increasingly powerful if the majority do not take the time to counter their message, both online and at the ballot box.