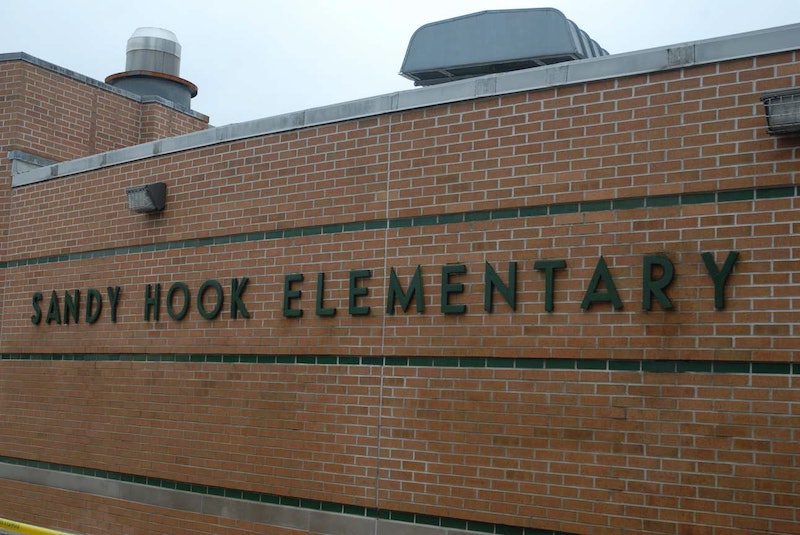 If you listen to political candidates and the pundits who analyze them, it's easy to believe that we're living in a country divided — divided by race, by religion, by gender, by political affiliation. But as divided as Americans may seem, there's something particularly troubling that unites us: Our country's affinity for gun violence. A new documentary about the 2012 Sandy Hook Elementary shooting, Newtown highlights the issue of gun violence in the U.S. — or, rather, the "epidemic" that it has become.

David Wheeler, who appears in the film, lost his 6-year-old son, Ben, in the Sandy Hook shooting. In total, 19 other children, all between the ages of 6 and 7, were also killed in the tragedy that occurred on Dec. 14, 2012. In the years since the shooting, Wheeler has had to cope with the loss while raising Ben's older brother, Nate, and a new son, Matthew. On having another child since Ben's death, Wheeler says, "We went into it with our eyes wide open, knowing that his existence was going to open a raft of reminders and comparisons ... and that we were constantly going to be thinking about Benny when we look at Matthew."

Wheeler's story is heart-wrenching, but it is not unique. He shares his experience with the parents of the 19 other children who were killed that day in Newtown, Connecticut. And on a larger scale, he also shares it with the growing number of Americans affected by gun violence.

And with the prevalence of firearm manufacturers comes the pervasiveness of gun ownership. Wheeler continues:

There are 300 million firearms in this country, if you include law enforcement, there's more than enough weapons for every man, woman, and child. This country is awash in this product.

With so many guns in circulation and so many incidents in the annual tally, it's plain to see how far-reaching the issue of gun violence truly is. The violence continues to affect more and more Americans every day — and an issue that was once accompanied by an "it won't happen to me" mentality has increasingly become a reality for a large segment of the population. Newtown director Kim Snyder saw this segment of the population firsthand after visiting the grieve-stricken Orlando community, still recovering from June's mass shooting at a nightclub that killed 49 people:

"That's when it starts to impress upon us that we are in denial if we don't think that this is an epidemic crisis," Snyder adds. After hearing the data, recalling the news headlines, and listening to the victims' stories, that "it won't happen to me" mentality seems increasingly useless. Gun violence unites Americans in a way that no group should ever be united.

Gun violence shouldn't just unite Americans in tragedy, though. It should also unite us in action. As one of the individuals closest to the issue, Wheeler doesn't want his fellow Americans to simply sympathize with him. He wants them to do something about it.

So just to say 'I just can't imagine it' and to just shove it off to the side as something that won't ever affect you is no longer acceptable. You can't do it anymore.

Wheeler encourages Americans to research the candidates on a ballot and vote based on an informed opinion. That's sound advice heading into this fall's federal, state, and local elections. His story, chronicled in Newtown, should inspire Americans to come together and combat gun violence, because unity could be the best remedy to an epidemic that affects far too many.