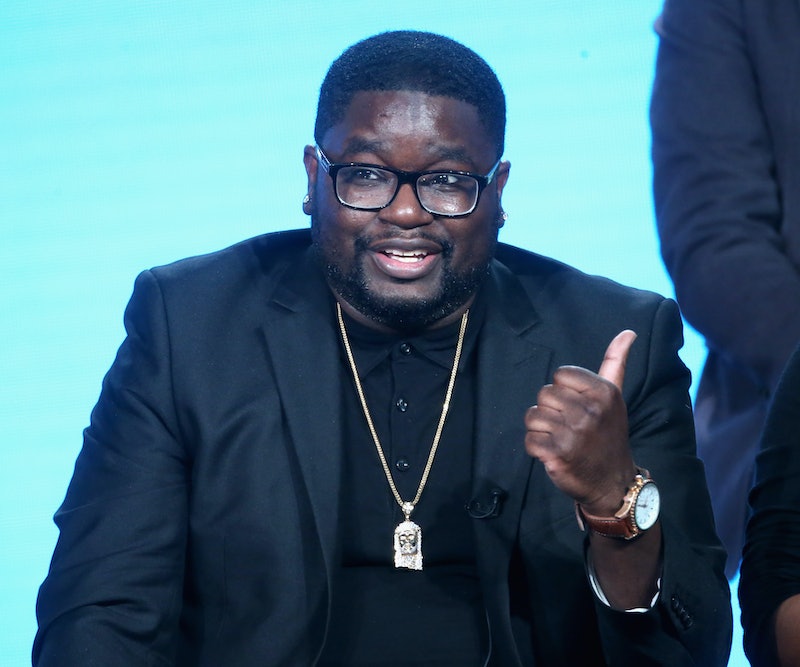 MTV is ramping up its comedic programming this fall, and one way the network is doing so is through the new series Acting Out, which premieres on Thursday, Oct. 13 at 10:30 p.m. ET. The show features sets by some of today's best and brightest up-and-coming comedians, which are then hilariously recreated by actors. So naturally, MTV enlisted actor and comedian Lil Rel Howery to host Acting Out.

And from the sneak peeks of Acting Out that have already been released, it looks like Howery will be a very active host. Not only will he be emceeing the whole shebang, but he will also be doing some stand-up comedy, as well as appearing in his own re-enactments. So yeah, we're basically going to see all of Howery's talents shine on Acting Out. Who could ask for anything more?

Well, hopefully no one because Acting Out is sure to satisfy all your comedy cravings when it premieres Thursday night. The preview clips of the show already make it look incredibly funny and relatable, which is a winning combination that is not very easy to achieve.

Howery's involvement in the show is a big part of that, too. Get to know more about Howery below, and you'll probably feel like you've known him for years.

Howery has made a name for himself in the comedy scene, regularly performing live in some of the country's biggest comedy clubs, including Carolines on Broadway. He was a semi-finalist on Last Comic Standing, has performed stand-up on Comedy Central, and appeared on Chelsea Lately, according to his bio on the Carolines on Broadway's website. To say that he's going to bring the laughs on Acting Out would be an understatement.

Before Acting Out, Howery had a few high-profile gigs on TV that showed off his acting chops. He stars as Bobby Carmichael on the NBC comedy The Carmichael Show. Before that, he was a cast member of the truTV sketch show Friends of the People. You also might have heard his voice on the animated series Lucas Bros. Moving Co.

He'll Be On The Big Screen Soon

Howery is currently filming the movie Mad Families , which will be heading to Crackle, Variety reported in September. The comedy has an all-star cast including Charlie Sheen, Leah Remini, and Naya Rivera. Howery has been documenting the behind the scenes of the movie on Instagram, and it looks like he's having the best time.

But He's Not Originally From Hollywood

As an entertainer, Howery spends a lot of time all over the United States, but he was born-and-raised in Chicago, according to WGN Radio, and he's never afraid to show his Chi-Town pride.

He Got The Seal Of Approval From A Major Comedy Star

Howery's first hourlong comedy special, RELevent, was executive produced by Kevin Hart, who is basically the most famous comedian around these days, so that's certainly saying something huge about Howery's skills. And by the looks of Howery's Instagram feed, these two still have a friendship and respect for one another.

But He Stays Humble

Howery has two children, a 7-year-old daughter and a 6-year-old son, he describes in one preview clip for Acting Out. In this clip, Howery also recounts the trials and tribulations of potty training his children, both of whom also appear in the video, and it's just about the most adorable thing ever.

But all kidding aside, Howery posted a truly touching message on Instagram about how much fatherhood means to him in celebration of this past Father's Day. "I truly love caring and providing for these 2.... I couldn't ask for doper kids," he captioned a photo of his children sound asleep. "I'm truly truly blessed."

Clearly, when Acting Out premieres, it's going to be impossible to not fall in love with Howery.