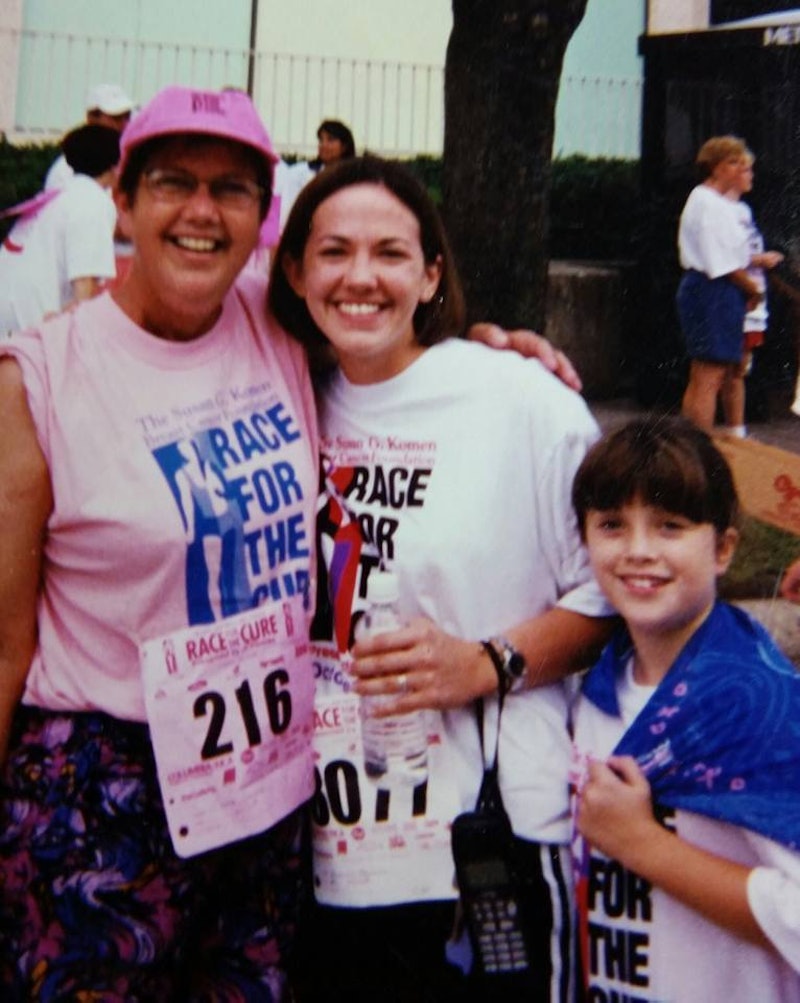 Some of my earliest memories are of massive crowds of pink. Every October from the time I was five years old, my mother and I would make the hour-long drive to Houston to participate in the Susan G. Komen Race for the Cure, the world's largest fundraising event for breast cancer awareness. At the Houston event, one of many Komen races across the country, we would meet with family and friends who had caravanned from across the state to raise money, celebrate survivors, and honor those who had lost their lives. My mother doesn't run the race anymore. Neither do I. Because even as someone who lost her mother to breast cancer, I can't support Susan G. Komen.

When my mother was diagnosed with an advanced stage of breast cancer in 1992, it was estimated that she would only have six months to live. Her doctors at MD Anderson in Houston, one of the leading cancer treatment centers in the world, asked her to focus on a goal to guide her through a brutal series of aggressive treatments, including multiple rounds of chemotherapy and a bone marrow transplant. Her answer was that she wanted to live long enough that her then-2-year-old daughter would be able to remember her.

As with most things that my mother, Cinde Johnston, did, she succeeded in and surpassed that objective. I remember the notes that she scribbled on napkins and tucked away in the lunches she made for me before leaving for work at 5 a.m. I remember our short walks home from my elementary school in the afternoon. I remember weekly Friday trips to King's Candy for ice cream and a bag of chocolates. I remember the specific you-know-what-you-did look she gave me that could make me dissolve into tears immediately. I remember her penchant for florals. I remember her steady alto that rung out with equal gusto in both the church choir risers and the car. I remember her laugh.

But even more than the precious mental snapshots that I carry with me, the nine years I had with my mother made a profound impression on the person I have become. She was an unwavering model of strength and tenacity, qualities that extended far beyond her grace in the face of cancer. She loved without condition or expectation. She challenged me, even from a young age, to be comfortable in my own convictions.

The last of those qualities has been the most troublesome for me each October. Certainly, for me and many others who have lost loved ones to the disease, every month is breast cancer awareness month. But its official designation in October doesn't necessarily feel satisfying; in fact, it feels impossible to escape. Pink ribbons are emblazoned on cosmetics, socks, and even NFL jerseys. On its face, it's a wonderful rallying cry for something that will roughly affect one in eight women in their lifetime, according to the National Cancer Institute’s Surveillance, Epidemiology, and End Results [SEER] Program. However, it's also something that hundreds of thousands of people around the world don't have to wait until a certain month to recognize.

And that's OK. I don't expect everyone to have the same personal experiences or emotional investment that I do with breast cancer. In fact, I hope that most people haven't had it touch their lives like I have. But with the October celebrations and remembrances, inevitability Susan G. Komen and the Race for the Cure — the foundation and 5K that, until three years ago, I avidly supported — are front of mind.

My mother was a marathoner, and she and my father passed a love of running down to me. So racing to raise money for breast cancer research, especially in an event that we had once done together, seemed like the most apt way to honor her memory.

Before then, I had heard the accusations that Susan G. Komen had contributed to pinkwashing — the phenomenon of companies adopting the pink ribbon logo to sell products that purportedly benefit breast cancer research but, in actuality, give very little of the proceeds to the cause. In 2011, Elizabeth Thompson, then-president of Susan G. Komen for the Cure, denied the pinkwashing allegations to Forbes and stressed that the companies the foundation partnered with were carefully vetted:

Just under 5,000 companies a year come to us to do business, and we have a very solid process to review ingredients in products, we follow IARC [International Agency for Research on Cancer] standards and if we don’t understand the ingredients of a product, we have as a back-up a group at Harvard that helps us vet them. ... We’re looking for companies and organizations that want to do more than just slap a ribbon on something.

Moreover, even with the accusations, I hadn't yet become cynical enough to give up on Susan G. Komen. After all, if there was any extra money going to breast cancer research, it seemed like a net positive at the time.

However, in January 2012, Susan G. Komen's decision to yank its funding to Planned Parenthood became public. The foundation temporarily halted its donations — which went towards Planned Parenthood's efforts to provide mammograms and breast cancer awareness outreach to low-income women. The move to end financial support for Planned Parenthood was largely perceived as an anti-abortion stance. Within two months of the decision to cut funding and the massive public backlash that ensued, Susan G. Komen decided to reinstate funding to the organization.

Susan G. Komen Affiliates fund breast cancer screening and outreach programs at 11 Planned Parenthood centers in local communities, with grants totaling $465,000. This is far less than 1 percent of the nearly 1,300 community health grants that Komen and its Affiliates fund worldwide every year. In all, Komen has invested more than $1.8 billion in community health and education programs since its founding in 1982.

The funding to these 11 Planned Parenthood locations pays for breast health outreach and breast screenings for low-income, uninsured or under-insured individuals. These include clinical breast exams and referrals for mammograms if needed.

Komen does not and never has funded abortion or reproductive services at Planned Parenthood or any grantee.

Susan G. Komen's goal to prevent breast cancer does not need to extend to abortion or even something as simple as reproductive health. But for me, the fact that the foundation was so willing to distance itself from anything controversial at the expense of thousands of women who might not be able to afford preventative health procedures without funding was abhorrent and further represented a misunderstanding of Planned Parenthood's core mission.

According to Planned Parenthood's annual 2014-2015 report, the bulk of its services went toward STD testing and treatment and contraception (45 percent and 31 percent, respectively). Cancer screenings and prevention weighed in at 7 percent, and abortion services at 3 percent, highlighting the fact that little of its services are geared toward terminating pregnancies specifically. As it highlights, Susan G. Komen now only contributes $465,000, or 1 percent of community health grants, to Planned Parenthood, which is largely designed to benefit low-income women.

As a pro-choice woman, the paltry grants that Susan G. Komen offers to Planned Parenthood is a red flag in itself. But the fact that cutting it completely was viewed just a few years ago as a largely political move is even more offensive.

I don't know where, exactly, my mother — a successful business woman and the first female president of her dental school — stood on abortion. As a child, that wasn't something that we discussed with frequency. But as a woman who was raised by a mother who taught her to stand by her own beliefs unapologetically, I feel confident that my decision to disavow Susan G. Komen and her 5K is the ultimate nod to my mother, a woman who has been memorialized by both her fight with breast cancer and her personal conviction. As her daughter, I choose to honor the latter above all.