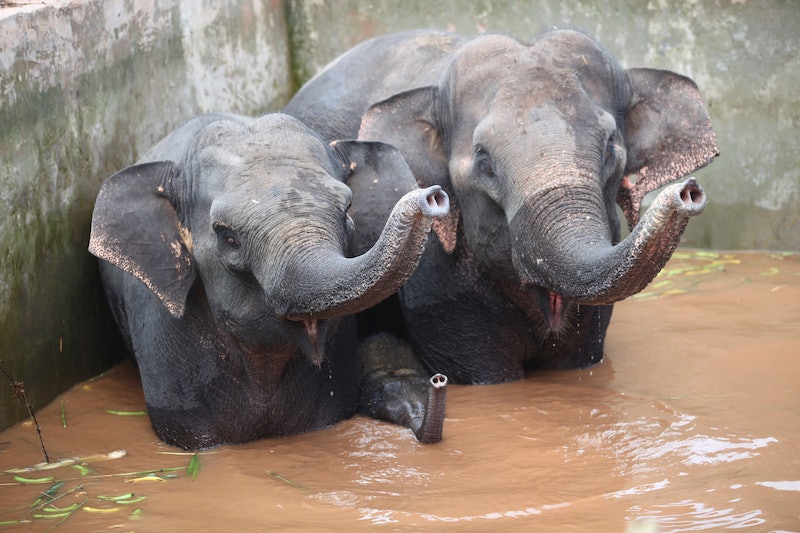 The travel site Tripadvisor has just announced that they will no longer sell tickets for attractions that involve physical interaction with wild animals, including wildly popular tourist jaunts like elephant rides and petting endangered species. It's not entirely a surprising move; this year has been a horror story for the animal-experience travel industry, with a scandal engulfing one of the world's most famous tiger sanctuaries in Thailand. The "tiger temple," in which tigers apparently lived in luxury alongside monks and could interact with visitors, was shut down in June by Thai authorities amid revelations of animal cruelty, illegal breeding, and the inexplicable discovery of 40 baby tiger corpses in a freezer. Luckily, if you're an animal lover seeking an ethical experience on vacation that gets you close without causing serious distress or environmental damage, it's still possible to enjoy the company of animals in ethical ways.

While there's no worldwide certification program for sanctuaries and animal programs to pass to be regarded as "ethical," there are various award systems that can let you know what you're doing is in the best interests of the animal. The WASP (World Animal Sanctuary Protection) list is one of the most comprehensive, but the animal categories of well-known, highly visible ethical travel awards, like the ones run annually by Responsible Travel, are also worth a look.

All the organizations on the list that follows have reputations and awards as ethical animal sanctuary travel destinations; most focus on the rehabilitation of animals, or on scientific research, rather than catering to the whims of tourists. Even better, your money will go towards supporting the important work they do.

The Center for Wildlife Care is a sanctuary based around helping wildlife return to the wild after injury or accidents, on 15 acres of land. They operate internships and volunteering programs without housing on-site, and also have a "Sponsor A Critter" system to donate to specific animals, including baby foxes, bald eagles, and animals so injured or used to human interaction that they'll likely never be freed (including Nostradamus the Screech Owl).

This isn't a vacation for the faint-hearted; most of the animals that pass through the CWC's doors are injured and need serious medical care, so you'll have to be good with blood. But, particularly during summer, volunteers are often in charge of hand-feeding orphaned baby animals, so if you want to get up close and personal with a side of American wildlife that is rarely otherwise seen, this is the place for you.

This is one of the only elephant sanctuaries in Thailand with an international reputation for ethical treatment of its animals, and if you're in the area and desperate to see some big mammals, it's the place for you (if you book far enough in advance). It's a sanctuary for abused elephants from throughout Thailand, and deliberately keeps its visitor numbers extremely low so as to avoid stressing the animals.

Visitors stay on-site with meals provided, and participate in a lot of different aspects of the elephants' daily lives (though never riding them), including bathing and feeding. But it's also a practical stay that will involve non-elephant centric tasks like pen repair and clean-up. These are not pets or tame animals, and the sanctuary emphasizes respect and distance.

If your animal tastes are more of the farmyard persuasion, Woodstock Farm Sanctuary is going to be your dream. It's a collection of rescued pigs, chickens, goats, the occasional alpaca, cows, sheep, and a variety of other barnyard animals, all of whom have names and individual personalities; they've been rescued from abuse, slaughter, and neglect to live a protected life with monitored interaction with visitors. (Visitors are highly encouraged to have guided tours instead of running willy-nilly around the sanctuary.) As of November 2001, the Sanctuary hopes to have overnight accommodation to help people stay. Note that the Sanctuary operates with a vegan philosophy, only allows vegan food on-site, and operates a vegan cafe for visitors.

The Lionsrock Big Cat Sanctuary in South Africa is part of the efforts of the organization Four Paws, designed as a rescue center for lions from a host of worldwide locations: ex-zoo animals, abused pets, circus lions, and others. At the moment, it hosts 90 different lions and tigers in a vast sanctuary space with a 3-star lodge attached. It operates as both a day-visit facility and one in which people may stay for holidays, taking part in hikes and game drives. If you're feeling particularly enthusiastic, they also welcome volunteers to help monitor the animals, feeding and cleaning up after a vast group of lions.

Who doesn't like donkeys? Unfortunately, these less-than-glamorous animals are given less than their due worldwide, if the statistics of the Donkey Sanctuary in the UK are anything to go by; they're currently aiming to have over 3,000 donkeys in foster care and to assist 2 million donkeys worldwide. (The Sanctuary even trains donkeys as companion animals for people in hospitals.) If you aren't able to foster a donkey yourself, though, the Sanctuary's central hub in Sidmouth, UK is essentially donkey heaven, running guided walks and allowing a lot of interaction with the roaming donkeys. They don't do overnight stays, but they do allow weddings. Just saying.

Bears don't exactly enjoy a cuddly reputation, particularly across the U.S., but there's a place in Romania where those who just want to help their ursine mates have a good life will be deeply pleased. The Millions Of Friends Association runs the Libearty Bears Sanctuary, with 95 different brown bears, all of whom had been rescued from conditions of abuse and neglect (many working in circuses or caged for tourist entertainment). Visitors aren't allowed to approach the bears; they're taken on tours in tightly controlled groups throughout the winter and summer, allowed to witness the bears in their natural environment through a bunker, and, as a bonus, taken to the national teddy bear museum of Romania.

Hetta Huskies have won awards for the way in which they give tourists a taste of authentic dogsled tours in Finland, offering both one-day and multi-day "safaris" with husky teams at the helm. It's particularly focused on the ethical care of sled dogs, with huge investment into the farm that houses the dogs and information on their training and daily lives. These are working animals, and are treated accordingly.

If you're more interested in learning the technical side of sledding, they operate a school, from lighter day courses and long weekends based around bonding with dogs to serious study designed to get you certified. They also happen to take sled dogs to see the Northern Lights at the right time of year. There is basically no downside to this entire experience.

One of the biggest animal sanctuaries in the United States, the Best Friends sanctuary in Utah houses over 1,600 animals, ranging from domestic cats and dogs to ex-farm pigs to wild bobcats and horses. All are rescues, many (yes, even the pigs) are available for adoption, and you're encouraged to get up close and personal with them in species-separated areas (bird lovers can hang out in Parrot Garden, for example). The site is so vast that it offers a range of on-site accommodations, including for RVs, in case you want to come pick up a pig in a motor home. It operates everything from internships to sleepovers with particular dogs or cats. A regular old petting zoo this ain't.

More like this
If You Have A Dog, Trainers Say These 30 Clever Things Will Genuinely Make Your Life Easier
By Dena Ogden
This Dog Food Is Not Only Super Healthy For Your Pup, It’s Also Better For The Planet
By A. Graham
The 4 Best No-Scratch Sprays For Cats
By Masha Vapnitchnaia
Your Dog Could Be So Much Better Behaved If You Tried Any Of These 25 Tricks
By Claire Epting
Get Even More From Bustle — Sign Up For The Newsletter