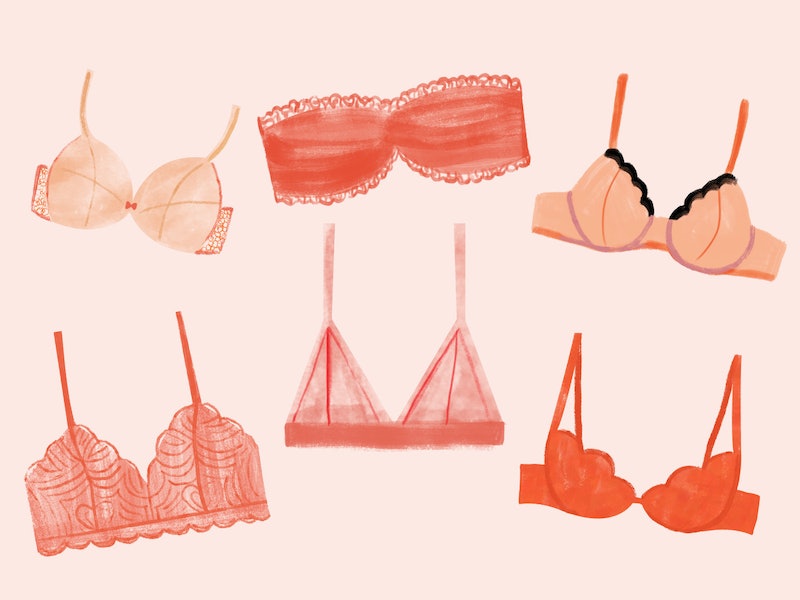 I’ve said this before and I’ll say it again: bra shopping sucks. Because women come in all different shapes and sizes, there really is no 'one size fits all' style, no matter what the tag may say. The struggle is just as real for people seeking the best bras for small boobs, as too much padding or too little support lead to equal annoyance. That’s why I asked women to share their favorite bras for small boobs.

While there are many perks to having small boobs, finding the best bra for a small-chests is tough. As one friend told me, it’s sometimes impossible to find a great push-up that doesn’t look like you stuffed your bra. Other times, the bra may offer way too little support, when you really want a bra that accentuates your natural shape. Then, there's the mechanics on the bra, like finding one where the straps don't slip, and backs don't rise and fall.

From push-up bras that offer lift to bras that are just comfy in general, here are the best bras for women with small boobs. This selection has been curated by real women who completely understand the struggle. You can be sure that you’re getting an amazing bra to help you look your best.

Why It Works: "They are just comfortable — no underwire that ends up poking at your skin or even poking out of the material itself," says Amanda L., who wears a 32AA. "The push-up is relaxed push-up that's good for everyday, and doesn't feel like I have tennis balls under my bra. And the price point is a plus!"

The Verdict: "I'm a 32AA bra size, and I barely fit in most commercial bras, so when I do find a one, it feels like an accomplishment," she said. "I love Target's Xhilaration collection and their cotton T-shirt push-up bras are a perfect fit."

2. A Push-Up Bra That Looks Natural

Why It Works: "It's versatile when it comes to style — wear it racerback for extra pushup, or just as-is," say Louise P., who has a 34B bra size. The bra is available in several colors, styles, and fabrics, too. "Definitely a more showy bra, but the cleavage still looks natural,” she said.

The Verdict: “The Emma Bra from Aerie is perfect!" she said. "It gives me a nice cleavage and makes my boobs look full without having the padding covering my boobs entirely."

Why It Works: "It is not only comfortable, but gives me a nice round shape and fits well enough so when I lean over, the cup doesn’t create that awkward space between my boob and the bra," says Sierra L., who wears a 36A. "Plus, it's really soft!"

The Verdict: "If it was acceptable to wear the same bra for a whole week straight, for me it would be my Gap Breathe T-shirt bra," she said. "I couldn’t care less about cleavage, but I certainly care about shape, and this bra does the trick."

The Bra: Out From Under Lace Triangle Bralette, $20, Urban Outfitters

Why It Works: "They have a thin comfortable band, the straps hold everything up, and the triangle shape covered everything perfectly," says Diana C., who wears a 32C. "I also liked how it was double layered instead of just one fabric of lace; it provided better coverage.”

Final Verdict: “The bralettes from Urban Outfitters were really comfortable for me because I was finding that all the bras I wore didn't fit me correctly," she said.

Why It Works: "There’s no extra padding that makes my breasts look fake, and no underwire that's digging under," says Marianna A., who has a 34 B bra size. "Another thing to know about this amazing bra is that its sleek cups and U-shape back makes everything look seamless underneath, so your bra won't be peeking out from under your shirt."

The Verdict: "My boobs feel totally supported without it feeling like I'm wearing a bra, and I love that," she said.

6. The Best Strapless Bra Ever

Why It Works: "As a 32A, I have searched far and wide for bras that work magic for me, and I found that using convertible bras helps push up my breast up for some semblance of cleavage," says Meghan H. "Because these bras are shaped differently and the straps are located closer to the middle of the cup, they create a lift that most bras don't." Plus, their strapless style means they may be fitting a little tighter than a regular bra would.

The Verdict: "Because I have trouble filling out the cups of most bras (even push ups) I really prefer the convertible bra, especially for those days I need to go strapless!" she said.

7. A Bra That Maximizes Cleavage

Why It Works: "I love this push-up bra because it gives me that cleavage I crave since I have smaller boobs," says Erica N., who has a 34 B bra size. "What's also great about this bra is the underwire padding that gives you an instant lift without changing the shape of your breasts." The hook and fastener in back makes it super easy to throw on, as well.

The Verdict: "It's definitely a confident [sic] booster, and also very comfortable and a great price," she said.

Why It Works: "It accentuates my small boobs and smooths out the shape of my breasts," says Katka L., who wears a 34B. Plus, it has adjustable shoulder straps that prevent them from slipping, and the bralette has light padding to give you a more natural-looking lift. It's so comfortable, you'll want to wear it all day.

The Verdict: "I'm in love with this bralette that I bought from H&M," she said.