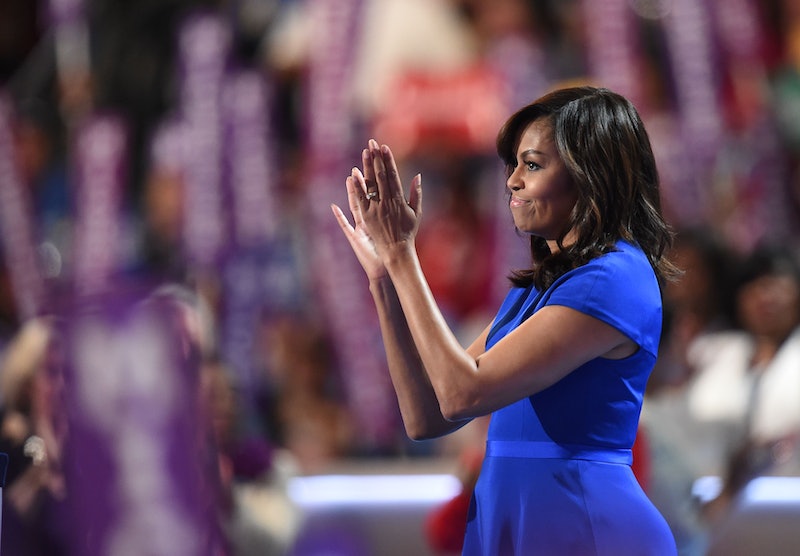 On Thursday morning in Manchester, New Hampshire, Michelle Obama offered a scathing critique of Donald Trump and his attitudes towards women. In the past week, the Republican nominee's misogynistic views have been crystalized in the public consciousness, thanks to a leaked Access Hollywood tape of Trump chatting with Billy Bush about "grabbing [women] by the pussy" and forcing himself on "beautiful" women. “To dismiss this as everyday ‘locker room talk’ is an insult to decent men everywhere," Michelle Obama told the crowd, making clear that sexism is an issue that both men and women in America can — and should — seek to combat.

"The men in my life do not talk about women like this, and I know that my family is not unusual," Michelle said. She added: “Strong men, men who are truly role models, don’t need to put down women to make themselves feel powerful."

Michelle invoked her husband and male members of her family to make the point that it's not just women who can make an effective stand against sexism as persistent and harmful as Donald Trump's; that male feminists like her husband, Barack, are an important tool in making sure that the sexism Trump displays is not passed on to future generations.

Women can stop Trump; women are stopping Trump. But women can't put an end to sexism by themselves.

In the past days, the "Woman Can Stop Trump" movement has grown in influence, with many women bravely speaking out about the times when men like Trump asserted power over them in a way they did not consent to — sexually or otherwise — as Trump boasted in the Access Hollywood tape.

Women can stop Trump; women are stopping Trump. At the very least, women can stop Trump from being president. But women can't put an end to sexism by themselves. Yes, we make up 51 percent of the voting population, but men like Trump still exist, and will continue to — and as sad as this is, if men like Billy Bush, who laugh along when Trump says he can "grab [women] by the pussy" and join in the "locker room" banter, don't call out misogyny when they see it, misogyny won't be going anywhere.

In her speech, Michelle nailed the necessity of both sexes coming together to fight everyday sexism. "Now is the time for all of us to stand up and say, enough is enough," she said, implicitly noting that "all of us" includes men and women alike. "On November 8, we can show our children that we reject hatred and fear," she continued. “In difficult times, we don’t discard our highest ideals; we rise up to meet them."

Michelle understands that feminism isn't a cause only for women, or only for women who have fallen victim to men like Donald Trump. Feminism is a cause on behalf of all women — and, in regard to toxic masculinity and other painful stereotypes, all men as well — and it's a cause that seeks to include, rather than exclude. It's a cause that flies in the face of what Donald Trump thinks about the America we want to be and the America that we are, and the more people that can come together to unite behind that cause, the closer we get to stamping out sexism like Donald Trump's.

More like this
Michelle Obama & Taylor Swift React To The Supreme Court Overturning Roe v. Wade
By K.W. Colyard
How Getting An Abortion Has Changed From The ’60s Through Today
By Amanda Chatel
Every Single Big & Small Way You Can Fight For Abortion Rights
By Tess Garcia
Police Shove 'Full House' Star Jodie Sweetin At An Abortion Rights Protest
By Radhika Menon
Get Even More From Bustle — Sign Up For The Newsletter