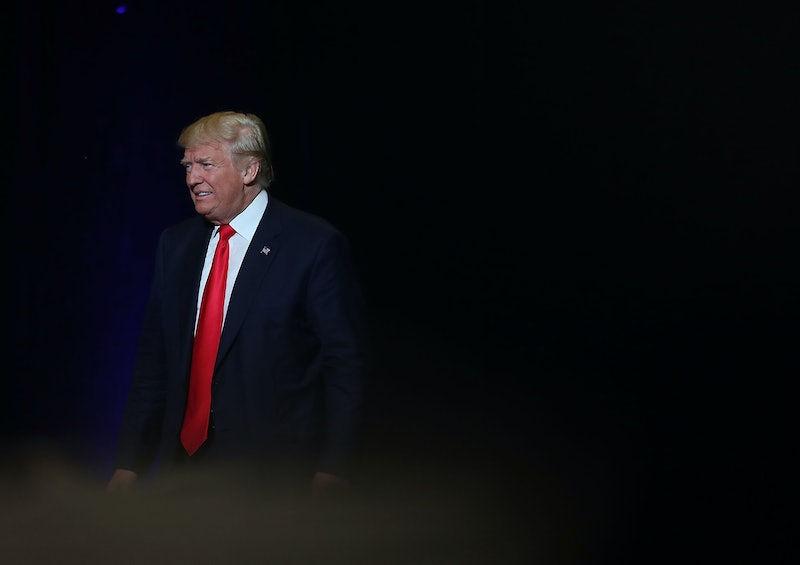 In just 24 hours, multiple women accused Donald Trump of inappropriate sexual behavior. One of them was Natasha Stoynoff, a writer for People magazine, who claimed that in 2005, she was reporting on a story about Trump's marriage at his house in Mar-a-Lago, while his wife Melania was pregnant. According to Stoynoff's own account in People : "We walked into that room alone, and Trump shut the door behind us. I turned around, and within seconds he was pushing me against the wall and forcing his tongue down my throat." Trump's camp has vehemently denied that he was ever improper with the woman who have stepped forward to accuse him.

On Thursday, in response to Stoynoff's accusations, Trump spoke at a rally in Palm Beach, Florida, where he made perhaps the most explicitly sexist attack on his accuser that he could have. Which is to say: Suggesting that he could never have sexually assaulted Stoynoff because she wasn't good-looking enough for him:

This specific attack from Trump brings to mind another video tape of Trump circulated in the past week — his attack on Paula Jones when she accused Bill Clinton of inappropriate sexual advances in 1998, and he called her a "loser." In a 1999 interview with New York Times columnist Maureen Dowd, Trump said of Clinton's affairs, "People would have been more forgiving if he'd had an affair with a really beautiful woman of sophistication."

One of Trump's most vicious attacks on Hillary Clinton has been that when her husband was accused of sexual impropriety, she insulted and defamed the women who came forward. In the past day, Trump and his campaign have shown a much more intense insistence on attacking these women than what they accuse of Trump's opponent. It's hard not to see a sense of irony in a tweet Trump campaign manager Kellyanne Conway posted shortly before the second presidential debate.

That was just four days ago, and the opinion of the Trump campaign on assault accusations has now reversed. Instead of propping up accusers, Trump is now saying a woman wasn't hot enough to be assaulted. No wonder women are abandoning his campaign in droves.