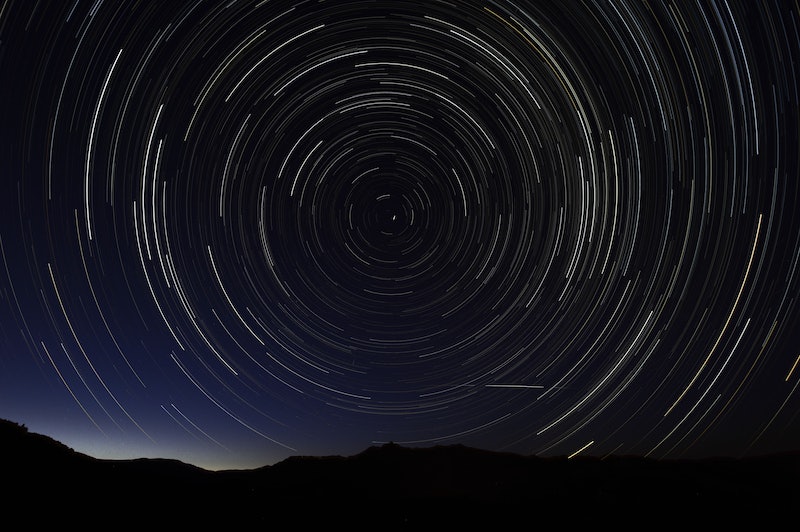 Hey, stargazers, there's another space show on the queue for this month! Get your calendars handy, because you're definitely going to want to mark down when the Orionid meteor shower is — drumroll please — Friday, Oct. 20! Technically this shower has already started, as it occurs between Oct. 2 and Nov. 7, but its peak visibility will occur on that date. And one of the great things about this shower is that it will be hard to miss. You don't need binoculars or any special devices. All you need is the will to wake up early (just before dawn on Oct. 21 is when the main performance is going down), and a blanket to lay back on.

The Orionid Meteor Shower is made up of debris that's been left by the trail of Comet Halley. The Earth intersects with the trail of Halley, once a year on the same dates, creating a sure-deal, annual spectacle. Particles shed by the comet move into our upper atmosphere, where they vaporize at 60 miles above the Earth’s surface. These meteors are particularly fast, too. They fall down into the Earth's atmosphere are 41 miles per second! And at least half of those particles leave ionized gas trails (aka, light shows) that appear in the sky for up to a few seconds after the meteor is completely gone.

If you're looking up on the night of Oct 20. or the early morning of Oct. 21, you can expect to see up to 20 meteors an hour! As always, it depends on the weather and the visibility, but in past showers from the same comet, people have reported a minimum of 10 meteors per hour, according to EarthSky. Luckily, the moon will be in its first quarter which will make visibility pretty good.

And you don't have to worry about looking to any particular part of the sky or struggling with a constellation map. The sky makes this event pretty easy for us — it's totally general admission. While the meteors that you'll be looking for are named after the constellation Orion and are thought to radiate from that very constellation, you should be able to catch them cross your field of view. All you have to do is simply park your tush somewhere and look up. If you're a major space cadet and know your constellations, you can try to trace the path of the meteors, and see if they're coming from the area surrounding Orion, which is central in the southern sky.

If you want to make a super special event out of this, head of out a major city area. The lights from the city cause light pollution which makes it difficult to see the sky clearly. Head to the country or a wooded and natural place where the sky is pitch black and you won't miss a thing.