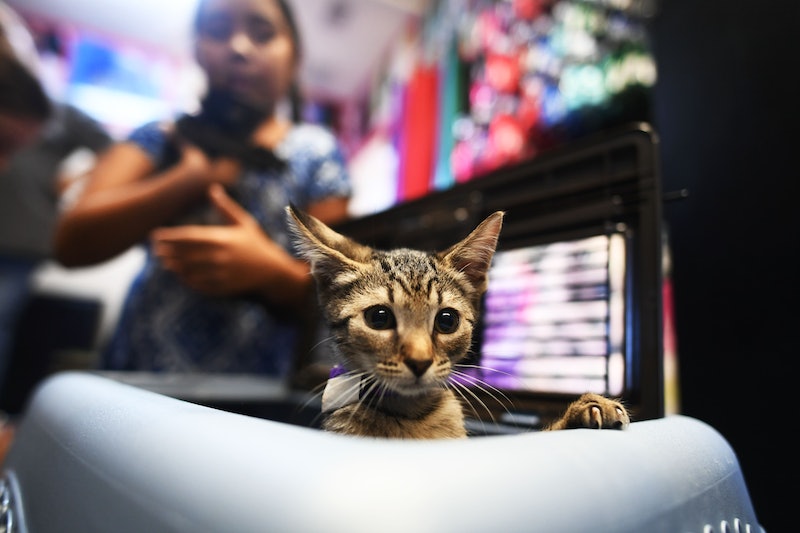 Just like us, Democratic presidential candidate Hillary Clinton watches cat GIFs when life gets hard. The former secretary of state and Democratic presidential nominee shared the news while in San Francisco, where she stopped during a series of "star-studded" California fundraisers, including one with Elton John in Los Angeles, CNN reported.

Clinton admitted her penchant for watching cat GIFs on Oct. 13 to an audience during a response to the leak of Donald Trump's 2005 hot mic tape and the most recent allegations against him. (The Trump campaign, as well as Trump himself, has firmly denied all of these allegations.) She addressed the feelings of voters who said they are tired of hearing about the election.

“The whole world has heard Trump brag about how he mistreats women, and the disturbing stories just keep coming," Clinton said somberly. "But it’s more than just the way he degrades women, as horrible as that is." She went on to describe the many other communities she claimed Trump has degraded, including immigrants, African-Americans, Latinos, people with disabilities, prisoners of war, Muslims, and the military. "There’s hardly any part of America that [Trump] has not targeted," Clinton claimed.

"Believe me, I get it," Clinton said to cheers from viewers. "The last few weeks I’ve watched a lot of cats do a lot of weird and interesting things." Me too, Hillary, me too. But Clinton does more than just watch the cats do strangely hypnotizing things; she gets inspired by them.

"But we have a job to do, and it’ll be good for people and for cats," Clinton said, including felines in her political call to action. "We got a job to do!"

This isn't the first time cats have been involved in politics; Stubbs, an orange cat, is the Mayor of Talkeetna, Alaska, and has been since he was a kitten in 1997. Town residents wrote him in as a candidate after rejecting all human options, and he's been a political figure ever since.

Thankfully, for Clinton's sake it doesn't seem like there are any cat candidates campaigning for the presidency. But in the meantime, maybe we can draw some inspiration ourselves from the plentiful cat GIFs online.