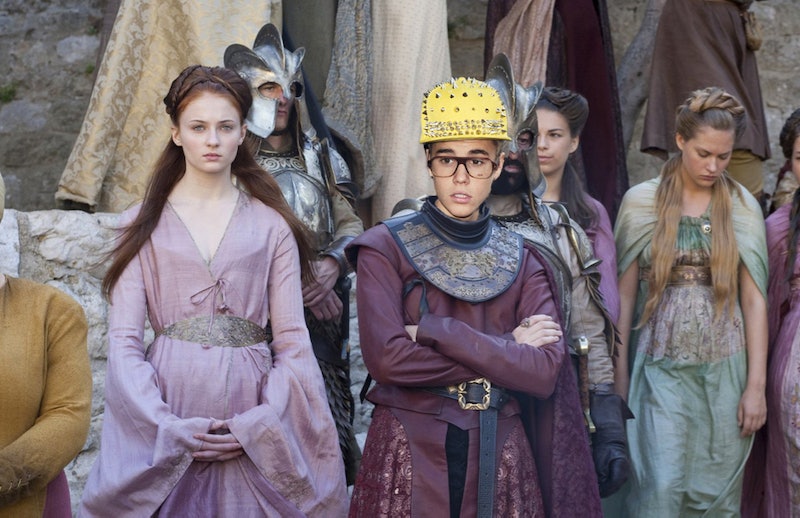 If anyone knows her the ins and outs of Game Of Thrones' petulant young king Joffrey Baratheon, it's Sansa Stark. Which is why Game Of Thrones star Sophie Turner using her power as the young woman who plays Sansa to throw some shade at Justin Bieber? Is hilarious. And kind of perfect. From Turner's interview with the Sunday Times:

I’ve been told by other cast members that I’m a lot like [Sansa]. Maybe when I first joined the show. I was only 13, I was one of those girls that read OK! 12 times a week, and I was all ‘Ooh, Justin Bieber’ — who is the Joffrey Baratheon of our time.

It should be noted that, no, Justin Bieber has (as far as we know) never beheaded anyone for funsies. As far as we know he's also not known to sexually assault and/or physically torture people.

But when it comes to the public perceptions of Bieber and Joffrey? And, well, the massive attitude issues couple with crippling immaturity? The fact that Bieber had his team carry him around the Great Wall of China like he actually thinks he's some kind of medieval monarch? Yeaaaah, there's a solid analogy there, and in fact it's a joke that's been circulating for a while now. Case in point: This clip from The Soup:

But there's no one better to confirm it than Sansa Stark herself, who's had to put up with more of Joffrey's bullshit than anyone else. Now we must consider it canon.

More like this
Hailey Bieber Went Pantsless In A Hoodie By Justin's Brand Drew House
By Dominique Norman
'GoT' Star Emilia Clarke Says She "Just Can't" Watch 'House Of The Dragon'
By Brad Witter
15 Photos Of 'The Last Of Us' Star Pedro Pascal That Cement His Zaddy Status
By Radhika Menon
Netflix Shut Down 'Bridgerton' S3 Rumours About A “Very Dark” Storyline
By Bustle
Get Even More From Bustle — Sign Up For The Newsletter
From hair trends to relationship advice, our daily newsletter has everything you need to sound like a person who’s on TikTok, even if you aren’t.