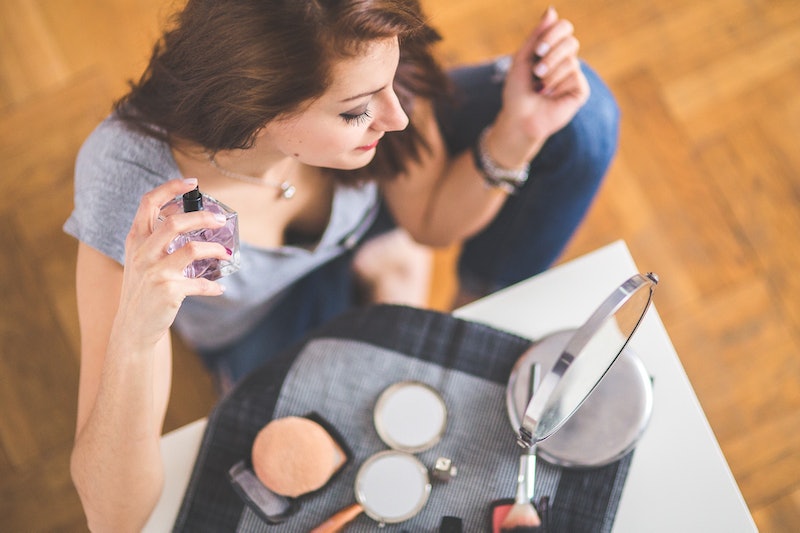 When looking for a new signature scent, there are a bunch of options to choose from. Not only is there the type of scent itself to consider, be it floral, fruity, or spicy, but there's also the strength. So if you've ever wondered what the difference is between parfum, eau de toilette, and cologne, the words aren't just some arbitrary or even synonymous French monikers. They're actually the classification of how potent a scent is. To find out a little more about how these various types of fragrances actually differ though, I emailed with an expert.

Patti Kapla, fragrance expert and vice president of Business Development for Fragrance.com, let me in on what makes these scents different not only in terms of ingredients but also wear-time. As it turns out, each type of fragrance has different staying power due to the various concentrations of oils, or "juice," explains Kapla. She further reports, "The highest concentration of 'juice' is found in a perfume (or parfum). Next would be eau de parfum, then eau de toilette, and finally eau de cologne." But exactly how different are these concentrations? And what effects do they have on how long your fragrance will last? Here's the breakdown:

The highest concentration of oils in a fragrance is found in parfum, and is typically around 20 percent, says Kapla. And naturally, the higher the concentration, the longer the scent will last. According to Kapla, a parfum will last about seven hours before needing to be reapplied. However, she stresses that everyone's body chemistry is different, so the wear-time may not always be the same.

The next highest concentration of oils is found in eau de parfum, which ranges from about 10 to 15 percent, says Kapla. Scents at this potency can be expected to last for about four or five hours before needing a refresher.

Eau de toilettes tend to have less than 10-percent oils, and will only last about three hours, says Kapla. She also explains that when it comes to men's fragrances, eau de toilette and eau de cologne are generally interchangeable.

If you've noticed that eau de colognes tend to be less expensive than parfums, it's due to their oil concentration of about five percent. Kapla estimates that these fragrance types will only last about two hours before needing to be reapplied.

So the next time you need to decide on a fragrance, if you know how long you want your scent to last, you'll know which type to choose.