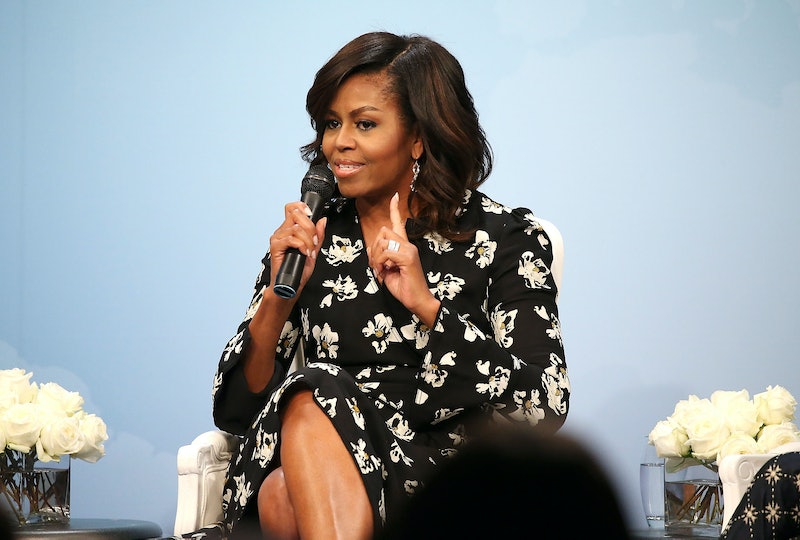 Ever since her beautiful, passionate speech at the Democratic National Convention, Michelle Obama has proven herself to be as important a part of Hillary Clinton's campaign as her husband, President Barack Obama. Of course, the president and the first lady each have very different approaches when they hit the campaign trail on Clinton's behalf. The president's passion is paired with some jabs that he knows will get under Donald Trump's (or, "The Donald," as he likes to refer to him) "very thin skin" — and the Republican candidate takes the bait every single time. But Michelle Obama refuses to say Donald Trump's name, and this tactic sends the strong message that, although Trump himself is our most pressing concern, he represents a larger societal problem that will persist long past the extremely likely event of a Clinton victory on Nov. 8.

Of course, Obama's deliberate refusal to utter Trump's name is important for a number of reasons. As fellow Bustle writer Morgan Brinlee points out, he doesn't deserve to be mentioned by name. Although I believe Michelle Obama is looking at the bigger picture and thinking ahead to how we will repair the country's divide after Election Day, there are of course times when she must refer to Trump directly — so she simply calls him "the candidate." Obama used this tactic on Oct. 13, when she delivered her most passionate speech yet as she addressed the tape in which Trump brags about sexually assaulting women.

Of course, the Democrats' main priority right now is keeping Trump out of the White House at all costs — and, as the candidate and his scorched-earth campaign rapidly lose support, we can all breathe a little easier as we continue to fight the good fight until every ballot is cast. But, it's undeniable that Trump's candidacy has normalized a lot of racist, sexist, and xenophobic rhetoric and actions within mainstream society — and a study conducted by the Southern Poverty Law Center shows that the "The Trump Effect" has caused distress among young minority children who fear they'll be deported. According to the same study, teachers have also reported an increase in the bullying of Muslim, black, and Latino children.

By speaking in broader terms as she addresses enthusiastic crowds, Obama successfully makes a strong case for Clinton and simultaneously sends a powerful message that Trump represents a large segment of Americans that can't be ignored.

This has seemingly been part of Obama's strategy since the moment she began campaigning for Clinton. In her moving DNC speech, one particular moment stood out to many of us — when she spoke about the immense responsibility that came along with raising two young daughters in the White House:

That is what Barack and I think about every day as we try to guide and protect our girls through the challenges of this unusual life in the spotlight. How we urge them to ignore those who question their father’s citizenship or faith. How we insist that the hateful language they hear from public figures on TV does not represent the true spirit of this country. How we explain that when someone is cruel, or acts like a bully, you don’t stoop to their level. No, our motto is: When they go low, we go high.

The Obama family motto has become an inspiration to many Democrats — including Clinton herself, who has directly quoted her friend at events and at the most recent debate. However, Obama's phrasing in this entire segment is important — of course, we know that Trump is responsible for starting the shameful birther movement. But those who eagerly bought into the narrative also bear culpability, which is why it's important that she emphasized that it's not just one leader, but many people who use racial slurs and continue to question President Obama's religion and declare that he wasn't born in America.

Trump is certainly responsible for inciting and encouraging disgusting rhetoric and making it mainstream — and this has had frightening, damaging effects that will continue to reverberate far beyond November. But we can't lay the blame for all prejudice solely at his feet — the fact that he became a major party nominee after insulting nearly every marginalized group possible shows that a significant portion of Americans feel hateful and resentful about the diversity in our country. This outlook was simmering beneath the surface for a long time, but it was largely considered taboo to speak so brazenly about one's prejudice. But, Trump's campaign has opened the floodgates, and Michelle Obama is keenly aware that defeating Trump won't put an end to the increased bullying, fear, and threats of violence.

Regardless of the outcome on Nov. 8, our country bears the shame of having a major party nominee who launched his campaign by labeling the vast majority of Mexican immigrants as criminals — a nominee who unapologetically mocked a disabled reporter on live TV; publicly scorned the parents of a fallen Muslim soldier; implied that all black Americans live in dire poverty; and (most recently) described the infamous Trump tape as nothing more than "locker room talk," thereby normalizing sexual assault. And, although the polls have decidedly swung in Clinton's favor over the past several weeks, many of Trump's despicable words and actions over the past year had little effect on his poll numbers.

Although Michelle Obama has repeatedly made clear that the vast majority of Americans are good people and Trump's values do not represent who we are as a nation, she's addressing his problematic supporters in the classiest manner possible. By not saying Trump's name, she sends the message that he isn't our country's only problem and that we need to address the hateful prejudices shared by the candidate and his supporters. Her speaking strategy reminds us that when Trump is defeated, it's not sufficient for us to breathe a sigh of relief and simply forget the ugliness of this election cycle. We need to, once again, come together and do everything in our power to reverse the damage that Trump's candidacy has caused.

It's not just that his supporters aren't going anywhere — it's that their young, impressionable children have been raised to believe that immigrants are the enemy, sexual assault is something to laugh about, and any president who isn't white surely must be lying about his citizenship. Our work won't be done after Nov. 8. As responsible Americans, it's on us to do everything in our power to reverse the Trump Effect as quickly as possible. Many of us are currently swamped with volunteer work for national and local campaigns — but, once some of our time is freed up after Election Day, it's time to hit the ground running again. We can volunteer for organizations that work to combat xenophobia, support sexual assault survivors, and provide resources to the hardworking immigrants who come to this country seeking a better life for themselves and their children.

It's not in our power to change the way every single prejudiced American thinks, but it is in our power to help and support the countless individuals who have been harmed by this campaign. Michelle Obama is committed to addressing all the harmful repercussions of Trump's candidacy, and she's made clear that she and her husband will remain in Washington, D.C. and fight the good fight even after he leaves office. Let's all join her and fight back against the prejudice that has seeped into the mainstream.