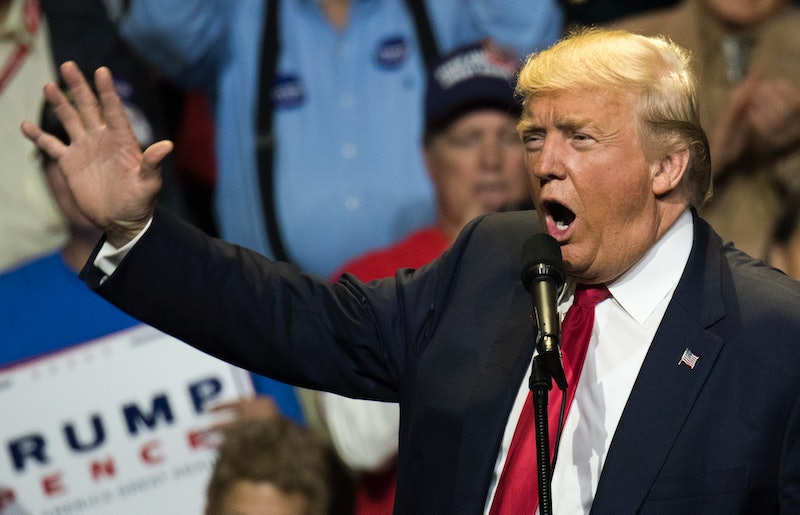 Donald Trump has had a very bad run of polls the last few weeks, and the hits just keep on coming. A poll of Texas released Thursday has Trump leading Hillary Clinton by just four points in the state, which is within the margin of error. The fact that Clinton is statistically tied with Trump in Texas, one of the most reliably Republican-voting states in the country, tells you everything you need to know about what direction this race is headed.

The Survey USA/WFAA/TEGNA poll has Trump at 47 percent, Clinton at 43, Gary Johnson at 3, and Jill Stein at 1, with 5 percent of voters undecided. The margin of error is 4 percent, which means Clinton and Trump are essentially tied in the state. Given Texas’ voting history, this is nothing less than remarkable.

While the South in general was once a Democratic stronghold, the region gradually became more Republican over the last half of the 20th century. The last time Texas voted for a Democrat in a presidential election was in 1976, when it went for Jimmy Carter over Gerald Ford. But what’s equally notable is the margins: Republicans have won the state by double-digits in every election after 1996. Oh, and the last time a Democrat was elected to statewide office in Texas was in 1994.

It’s a big deal, then, that Trump is struggling in the state. And it’s not the only reliably red state that’s in danger of slipping from Trump’s fingers: An eye-popping poll released Tuesday found that in Utah — a state far more conservative than even Texas — Clinton and Trump are tied at 26 percent. According to FiveThirtyEight, Clinton is the slight favorite to win Arizona, another red state, and at one brief point in the cycle, she was even ahead in Georgia.

There’s no single reason why Trump is having such a hard time in red states, but a few facts are worth noting. For one, he won the Republican primary with a plurality of votes. This means that, while he won the nomination, the majority of Republican primary voters voted against him. It’s also relevant to point out that many of Trump’s policies — to the extent that he cares about policy — aren’t traditionally Republican; trade, gay marriage, entitlement spending, and foreign policy are a couple of examples.

In short, it’s not surprising that a whole lot of Republicans don’t like Trump, and that could well account for his depressed support in red states.

Importantly, the Texas poll was conducted after the publication of the 2005 recording of Trump bragging about how he feels as though he can grope women without consent. Earlier polls had shown Trump leading by around six or seven points; this strongly suggests that the release of the video hurt his already thin support in the state.

In all likelihood, Trump will rebound in Texas, and he may bounce back in some of the other aforementioned red states as well. As of now, though, it's unlikely that he will win the presidency — FiveThirtyEight’s polls-only model gives him just a 14.4 percent chance as of this writing. And it remains possible that he'll lose in a couple of states that — let's face it — no Republican has any business losing. And that's the Trump Effect, ladies and gentlemen.