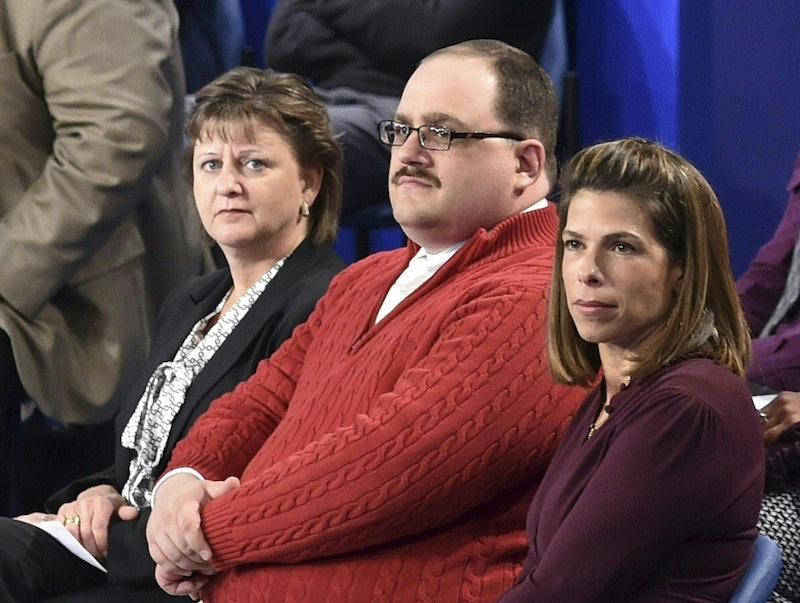 Hungry for any distraction from the circus fire that is the 2016 presidential election, Americans have crowned Ken Bone as their momentary hero, and he either has some innate business savvy or has hired a good agent, because he's taking all of the opportunities he can get. In a stranger than fiction election year, Bone isn't just the star of the debate anymore — he's coming into his own as the latest viral sensation in more ways than one. And it's not all good.

Bone has already begun piling up the endorsements and other sweet deals that are only available to those whom viral fame touches: He landed an ad deal with the newly-launched Uber Select, has been offered free steaks by a restaurateur, has been featured in a live interview with Jimmy Kimmel after the second presidential debate, has launched a line of "Bone" T-shirts with his face on them, and, most bizarrely, might be Joe Jonas' next man crush — depending on who he votes for, of course. This is, it seems, what life is like in the #BoneZone, and until now, Americans have been eating it up.

Bone became a viral celebrity in part because he represents some typical Americans — he looks like a normal person, has normal interests and questions, and even says he falls in the middle of the road between political affiliations. Paired with his name and being in the right place at the right time, it was the perfect storm.