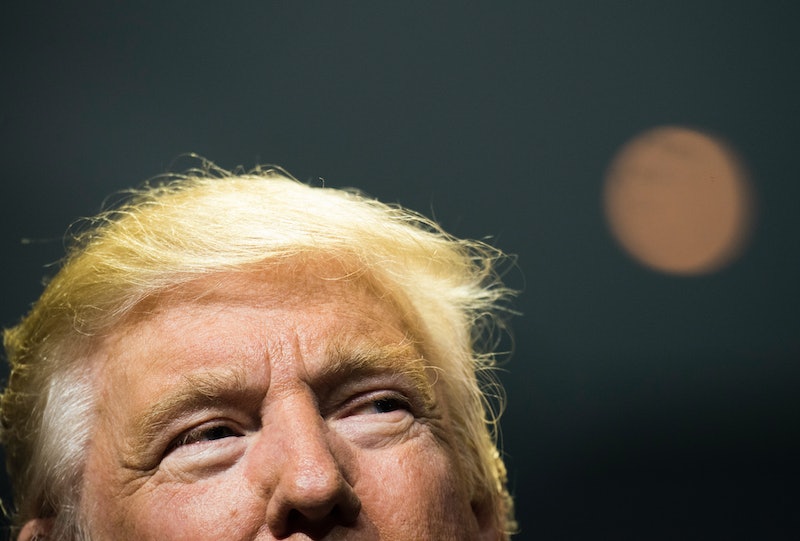 Since the release of the now-infamous Access Hollywood tape last week, in which Donald Trump can be heard advocating for sexual assault, things have — at once surprisingly and predictably — only gone downhill from there. Most recently, The New York Times published accounts from two more women who allege the Republican nominee sexually assaulted them, and despite Trump's hilarious attempt to claim libel, the publication is sticking to its guns. The reason is simple — you can't say libelous things against someone who so clearly and actively ruins their own reputation.

The Times argues that the things Trump has said about women in the past and throughout his campaign fall in direct line with the publication of their story, so to retract and apologize would be doing a disservice to democracy.

Indeed, Trump has spent seemingly his entire life saying demeaning things about women. While that fact is nothing new, it bears repeating — like The New York Times pointed out to Trump's lawyers, the disgusting manner in which he talks about women has become a matter of national interest.

In the service of that interest, here is another look at some of the things Trump has said publicly about women. (One can only guess what he says behind the closed doors of the locker room.)

1. Why Women Are Employed

In Trump's world — whether in his Miss Universe pageants or on The Apprentice — women are only capable if they meet his standard of beauty. When speaking to a female reporter about one of his pageants, Trump said:

Well, obviously it's great outer beauty. I mean, we could say, politically correct, that look doesn't matter, but the look obviously matters. Like you wouldn't have your job if you weren't beautiful.

2. Why Women Are Sexually Assaulted

Trump, always one to discuss sexual assault, mused that attacks against women in the military were predictable. Because apparently, men and women together just automatically equals sexual assault. Well for Trump, maybe that's true.

3. On His Daughter Being "A Piece Of Ass"

Trump is fond of this particularly disturbing turn of phrase. In an interview with Howard Stern, he gave the radio host the OK to call his daughter "a piece of ass." The Republican nominee had used that phrase in a 1991 interview with Esquire as well, saying:

You know, it doesn’t really matter what [the media] write as long as you’ve got a young and beautiful piece of ass.

4. On Women Being Gold-Diggers

In his 1997 book The Art of the Comeback, Trump gave this nugget of advice to all male newlyweds:

The most difficult aspect of the prenuptial agreement is informing your future wife (or husband): I love you very much, but just in case things don’t work out, this is what you will get in the divorce. There are basically three types of women and reactions. One is the good woman who very much loves her future husband, solely for himself, but refuses to sign the agreement on principle. I fully understand this, but the man should take a pass anyway and find someone else. The other is the calculating woman who refuses to sign the prenuptial agreement because she is expecting to take advantage of the poor, unsuspecting sucker she’s got in her grasp. There is also the woman who will openly and quickly sign a prenuptial agreement in order to make a quick hit and take the money given to her.

5. That Women Who Breastfeed Are "Disgusting"

During a 2011 deposition against Trump, a lawyer requested a medical break to breastfeed her baby. "You're disgusting," Trump allegedly told her, and then stormed out of the courtroom. His lawyer does not dispute this claim.

6. On Women Being Seductresses

Trump's The Art of the Comeback is just filled to the brim with sexist gems like this:

Women have one of the great acts of all time. The smart ones act very feminine and needy, but inside they are real killers. The person who came up with the expression "the weaker sex" was either very naive or had to be kidding. I have seen women manipulate men with just a twitch of their eye — or perhaps another body part.

7. On Women's Worth Being Tied To Her Husband's Satisfaction

In a since-deleted tweet, Trump suggested that Hillary Clinton couldn't possibly be president due to her husband's infidelity. This has been a repeated theme throughout the Trump campaign.

This is another favorite of Trump's. In the above Entertainment Tonight interview, he said he would "look in that fat, ugly face" of Rosie O'Donnell's and fire her from her job. This was an insult Trump said O'Donnell "deserved" in the first presidential debate.

Likewise, he went after former Miss Universe winner Alicia Machado repeatedly following the debate and accusations that he had called her "Miss Housekeeping" and "Miss Piggy." During a 1997 interview with Howard Stern, Trump had this to say about Machado's time as Miss Universe:

She was like an eating machine... I think she ate a lot of everything.

In his 2008 self-help book Think Big: Make it Happen in Business and Life, Trump made this remark about sleeping with women:

Oftentimes when I was sleeping with one of the top women in the world I would say to myself, thinking about me as a boy from Queens, 'Can you believe what I am getting?'

Given what the public has learned about Trump throughout his campaign, these remarks follow a clear pattern of abusive rhetoric towards women. There is no excuse for them then, or now — and there is no place for them in the White House.