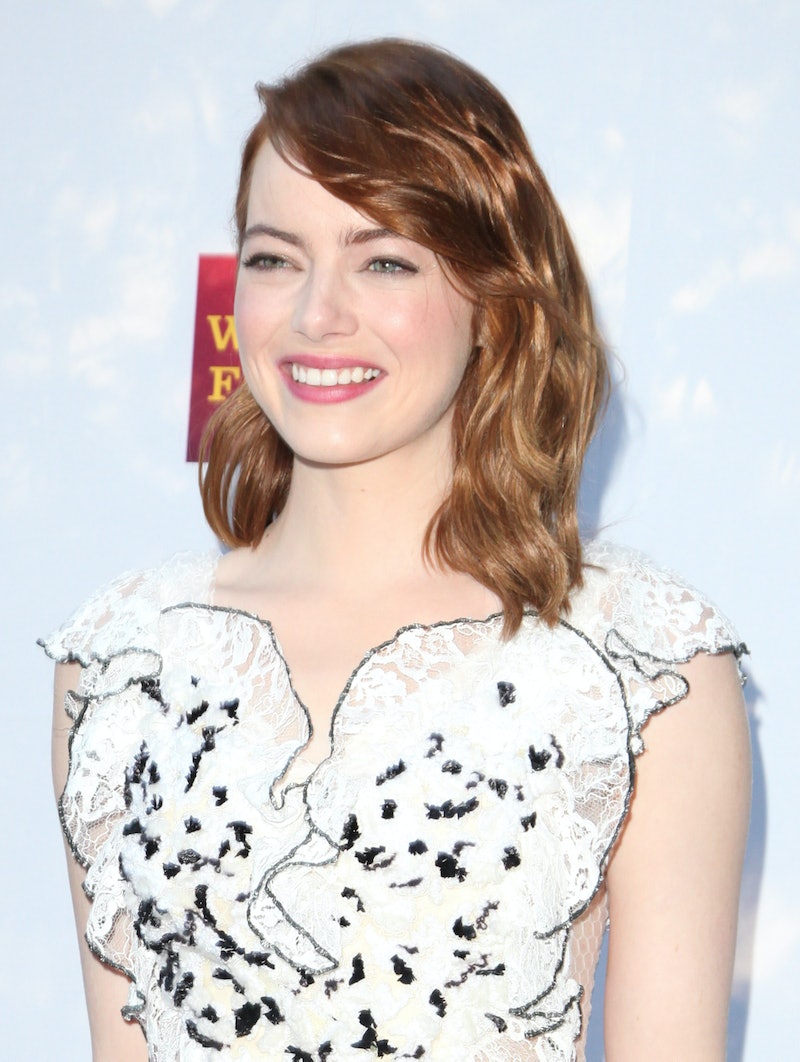 It's no secret that fall is the season of hair changes. But instead of taking to social media to show off her new locks, this actress just had a much bigger reveal. For the November issue of Vogue, cover star Emma Stone cut off all her hair. I'm talking pixie cut, people! This isn't the first time she's gone short though, but it's the shortest she's ever been before. UPDATE: As of Oct. 6 Stone had long hair, and since the cover was probably shot before then, there's a chance her cut isn't real.

EARLIER: Vogue is known for their high fashion, stunning covers. Their November issue is definitely the latter, but in a completely different way. Stone debuted a pixie hair cut on the vote-themed cover. The star wears a striped turtle-neck and no makeup, so all eyes are on the new 'do. I'm absolutely loving the hair change. Stone has been going shorter and shorter over the years, so it only makes sense that she would eventually take the plunge. There's no word on whether it's for a role or just her personal style, but either way, it's gorgeous.

The last time she shocked the world with her beauty change, it was when she dyed her hair blonde. It was something completely different than she'd ever done before. The color looked absolutely gorgeous, in my opinion, but didn't last very long. As big as that hair change was, her recent chop definitely wins the award for Stone's most drastic yet. Just see for yourself.

Look at those locks! I'm loving that they paired it with a natural makeup look and the bushy brows. This girl is definitely a hair chameleon to say the least. People seem to be loving the transition so far too.

Here's a look at some of her most drastic past looks, so you can see just how drastic her recent look is. I don't know how she does it, but she looks great in ever single style.

This is what the star looked like before she made the chop.

In between her brown and red hair phases, she had this blonde-ish look.

This was the darkest the star has ever gone.

Like I said before, this isn't her fist time going short. Until now, this was the shortest she's been.

Fans are more used to seeing her in this deep red color.

Back in 2011, she rocked blonder hair than ever.

Who knows what the star will do with her hair next!

More like this
Kim Kardashian Chopped Her Platinum Hair Into A Lob
By Olivia Rose Ferreiro
The $6 Drugstore Beauty Product Taraji P. Henson Uses Every Single Day
By Danielle Sinay
The Best Beauty Looks From The 2022 BET Awards
By Audrey Noble
Why Sarah Jessica Parker Wanted Fans To Stop Calling Her Hair Choice “Brave”
By Brad Witter
Get Even More From Bustle — Sign Up For The Newsletter