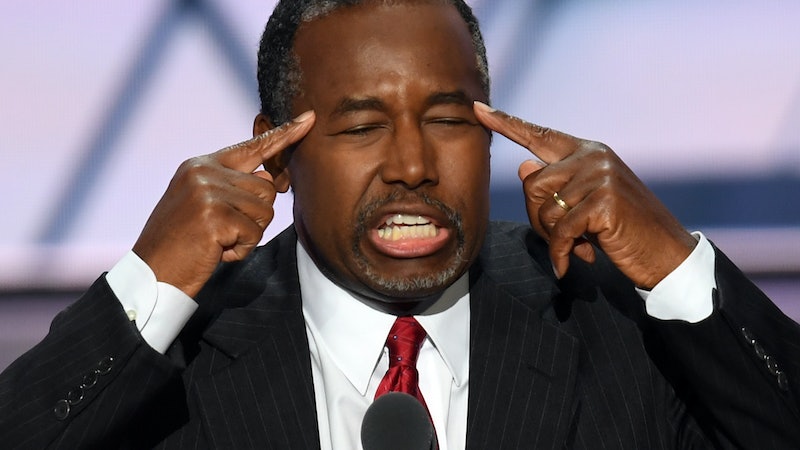 Well, this is rough. Over the past few days, the Donald Trump presidential campaign has become embroiled in what will likely be, when it's all said and done, the defining scandal of the entire 2016 election. Namely, the campaign is contending with multiple accusations of sexual assault against Trump, allegations that track tightly with the candidate's own boasts of non-consensual kissing and groping heard in the now-infamous Access Hollywood tape. And it's becoming increasingly clear his surrogates don't know what to do ― for instance, Ben Carson asked to cut Katty Kay's mic during his defense of the Republican nominee on MSNBC's Morning Joes, because he couldn't handle being asked a simple and direct question.

Namely: Are you saying these women are all liars? That's the official line from the man at the top, to be clear ― simmering with ill-concealed rage and conspiracy theory during a campaign event, Trump himself called his accusers liars, just one day before Carson's case study in disastrous surrogacy.

Carson was appearing on MSNBC and received a question from BBC reporter Katty Kay, who pointedly asked whether he believed that the women coming forward against Trump are lying. And ― perhaps beleaguered by months of strenuously defending the indefensible ― Carson snapped.

That's your characterization, because you need to characterize it that way to try to make me the bad guy.

This prompted Kay to interrupt, reasserting her plain, straightforward question, at which point Carson lost it, entreating the show's titular host Joe Scarborough to cut Kay's microphone. Because a conversation about sexual assault is the perfect time to try to silence women.

To his credit, Scarborough had none of it. "No. It's a simple question, yes or no," Scarborough said, "do you think believe these women are lying or not?" Carson's answer? "It doesn't matter." Ergo, in his world, it doesn't matter whether or not a Trump is a repeated sexual predator or not.

It doesn't matter whether they're lying or not, what matters is that the train is going off the cliff. We're taking our eye off of that, and we're getting involved in other issues that can be taken care of later.

Needless to say, Carson's assertion that this can be "taken care of later" is absurd in the context of a general election campaign with slightly less than a month to go ― unless he means that we can all tsk-tsk Trump after he's inaugurated, which sends a truly great message to the women of America about just how seriously their physical and sexual autonomy should be taken.

But really, the reason so many Trump surrogates are flailing and twisting in the wind on this topic is plainly obvious: There are no good answers. Either all of Trump's accusers (who now number in the double-digits) are lying about him, or he's a serial sexual abuser unfit to lead the United States, much less to be alone around women in any social or professional context.

Obviously, Trump has strenuously denied all of the allegations, and he hasn't shied away from saying what Carson clearly didn't want to ― he lambasted his accusers as "horrible liars" at a rally speech in West Palm Beach, Florida just one day after the allegations dropped.