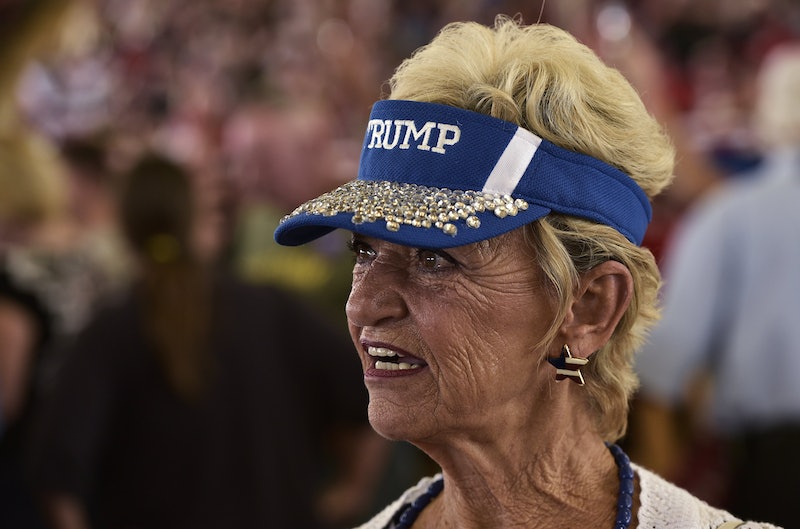 One of the popular themes of this election is that people say they are voting for "the lesser of two evils." For some, a serially racist, xenophobic, misogynistic advocate for sexual assault is unimaginably "the lesser of two evils" as compared to Hillary Clinton. And in the wake of a series of sexual assault allegations against Donald Trump, in addition to a video in which he clearly brags about violating women, female supporters of the nominee devised the #WomenWhoVoteTrump hashtag. The only issue is that they can't seem to get past their hatred of Clinton long enough to actually endorse Trump in any meaningful way.

A quick read-through of some of the hashtag's top tweets makes one thing abundantly clear: Female supporters of Trump are so busy trashing Clinton that they can barely seem to list one good thing about their nominee. This, of course, has been a common thread this election cycle — when Trump inevitably says or does something that would tank any other candidate, his supporters declare that they couldn't possibly vote for Clinton because she's a liar, a bitch, a murderer... the list goes on and on. Instead of validating their candidate through his own supposed qualifications, they only focus on why they think Clinton isn't qualified.

This line of thought carries throughout the #WomenWhoVoteTrump hashtag. Instead of defending Trump, many just use it as a platform to bash Clinton:

Judging from this hashtag, it seems like attacking Clinton is easier than defending Trump. Some of these women who vote Trump, therefore, don't seem to be voting for Trump at all, but merely against Clinton.

Of course, this "lesser of two evils" thought process is found among those voting for Clinton, too. But there is a remarkable distinction: None of Trump's policies are backed by any sort of political forethought. They don't deserve to be hashed out the way Clinton's are. While she proposes serious policies that leave room for debate and compromise, Trump's simply relies on fear-mongering and inexperience. It therefore becomes easy to focus on Trump the man, because with or without these scandals, his policies have no substance.

It goes to show that even among his most die-hard supporters, there is little room for justification or taking the candidate seriously. If all they have in support of Trump is a vote against Clinton, the Republican nominee is going to eventually see his support dry out.