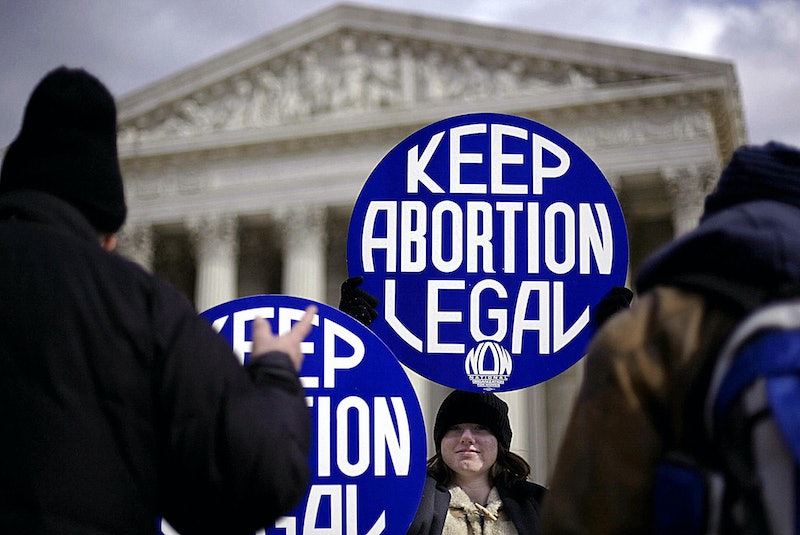 One common anti-abortion tactic in many states in recent years is to implement mandatory waiting periods; the assumption is that, given a few days, women might change their minds about wanting an abortion. However, a new study finds that most women are highly confident about having an abortion, both before and after the procedure — which makes the need for an inconvenient waiting period highly suspect.

In the study, which was published in the journal Contraception, researchers surveyed 500 women in Utah who were seeking abortions at one of four family planning clinics. They then followed up with the women three weeks later, at which point two-thirds responded. The interviews and surveys were designed to assess factors associated with uncertainty — and the researchers found that, overall, the women in the survey were confident in their decisions, both before and after the procedure. In fact, they note, the "level of uncertainty in abortion decision making is comparable to or lower than other health decisions." In other words, roughly the same percentage of people who are confident both before and after having, say, an important surgery are also confident about abortion.

The researchers did find that 11 percent of women in the study were still pregnant during the follow-up interviews three weeks after the initial survey. These women were disproportionately uncertain during their initial survey. On the other hand, 89 percent of women did have abortions and were, on average, very certain about their decision. What's more, previous studies have shown that women rarely ever regret their abortions.

All of this really calls waiting periods into question, especially if they're nothing but an inconvenience — often an enormous one — almost 90 percent of the time. One-third of women in the United States, for example, must drive more than 25 miles to access abortion services, according to the Guttmacher Institute; for many, this is already an economic hardship, requiring women to not only pay for gas or other travel but also to take more time off from work than they would if there were more accessible clinics nearby. When you're also required to wait several days, even though you've already made up your mind and are unlikely to change it, you just end up expending even more time, money, and other valuable resources for literally no reason.

And yet, the myth that women frequently regret their decision persists.

A startling number of laws aimed at limiting abortion access have been passed in the last few years. Thirty-five states currently require women seeking abortions to receive counseling before the procedure is performed; 29 specify exactly what information counselors must give to women. Furthermore, 27 states require women to wait a specified time after initially seeking an abortion before the procedure can happen. In fact, waiting periods affect six in 10 women in the United States.

Anti-choice activists insist that these sorts of precautions are necessary to "protect" women. The argument is that women often regret their abortions, and even that women who terminate a pregnancy often experience depression as a result, despite there being no reliable evidence that this is the case. In fact, studies have shown that a majority of American women do not regret their abortions at all — as many women who have had abortions can also tell you.

And now this study confirms that not only do most women not regret having an abortion, they are also highly certain of their decision. The authors of the study write, "The high levels of decisional certainty found in this study challenge the narrative that abortion decision making is exceptional compared to other healthcare decisions and requires additional protection such as laws mandating waiting periods, counseling, and ultrasound viewing."

Of course, some anti-choice groups are already attacking the study's validity. LifeNews.com criticizes its source, the University of California at San Francisco, by arguing that the university has produced several "questionable research studies that fall in line with the pro-abortion movement’s agenda." The idea that these findings might simply reflect reality seems to be out of the question for them.

However, it seems clear that anti-choice arguments are increasingly not borne out by empirical research. Women are fully capable of making our own decisions, about our reproductive lives and anything else. To suggest that women need to be treated like children who don't know what we really want and need to be counseled and given extra time to think about it so that we don't screw up is insulting.

The evidence shows women are actually very confident about the whole thing. So lawmakers — as so many women have said time and time again — should really let us decide what to do with our bodies. It's as simple as that.

More like this
5 Ways To Stand In Solidarity With Women In America From The UK
By Sophie McEvoy
How To Fight For Reproductive Rights, Based On How Much Time You Have
By Courtney Young
34 Quotes That'll Inspire You On Juneteenth & Beyond
By Syeda Khaula Saad and Siena Gagliano
How Getting An Abortion Has Changed From The ’60s Through Today
By Amanda Chatel
Get Even More From Bustle — Sign Up For The Newsletter