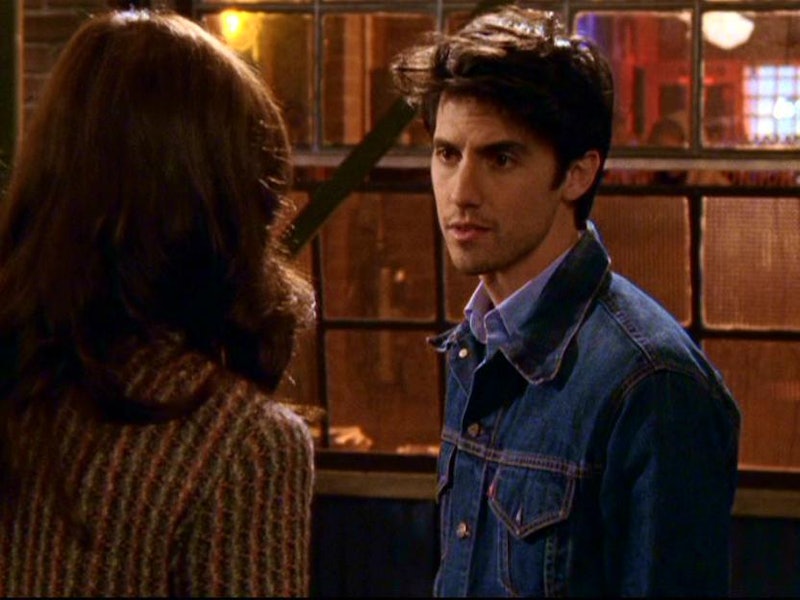 Within the ongoing battle over which ex-boyfriend should end the Gilmore Girls revival at Rory's side, you might already be a card-holding member of Team Jess. Even if that's the case, though, the classic reasons for loving Jess as Rory's beau more than Logan or Dean actually go way farther than just the fact that he's extremely conventionally good-looking, the closest to being a bad boy, and creative (note how the only character who has published a book by the end of the series wasn't Rory, but Jess): There's a lot more going on here — and that's why you need to rewatch this episode of Gilmore Girls, because it proved that Jess and Rory are meant to be.

It is, of course, Season 6, Episode 8, "Let Me Hear Your Bailakas Ringing Out." And let me just stop you there — I'm well aware that Rory has a completely different boyfriend in that episode, Logan. But we'll get there. The fact is, while Jess and Rory were once a terrible fit simply because Jess was pretty young and immature, in this episode, we get to see the pair interact as adults and it's an interesting insight into how things might have played out between them if they'd stayed together.

It's important that, if you're not an obsessive Gilmore Girls fan, you know where Rory's at during this episode, because she's in a weird place. I meant that as a metaphor, but you know what? It functions on all the levels. She's physically in a weird place because she's a living in her grandparents' pool house after dropping out of Yale University. Of course, she's also metaphorically in a weird place because, following her boyfriend's dad telling her she's never going to be a journalist, she's given up. Instead of going to school, she's embarked on becoming a peculiarly young Emily Gilmore: she's all about organizing bougie parties and not about much else.

The fact that her boyfriend Logan is supremely chill about this already tells viewers something: maybe he's not the right match for Rory. Not because he's malevolent so much as perhaps he doesn't really know his girlfriend very well. Because, for all of us who had been watching Rory obsessively read and study and work and write for newspapers from day one, this comes off as extremely sinister. Rory's raison d'etre is her work, so for her to quit pursuing her whole journalism dream and drop out of Yale, where she worked so hard to get to — it's not good.

So honestly? Thank goodness for Jess, who happens to drop in on Rory unannounced in this episode. I probably shouldn't, but I can't help but compare and contrast where Rory and Jess' lives are at while they catch up. Rory, the golden girl of Stars Hollow, is now a college dropout, alienated from her mother and leeching off her grandparents. In contrast, the surliest, meanest, no-good scamp Stars Hollows has ever seen is now happy and productive, working at the printing press that published his novel. He hasn't shown up to show off, though: He came to tell Rory about the book he wrote, to tell her she inspired him to write it.

The beauty of the episode is that Jess' feelings upon finding out where Rory is in life mirror the viewers'. We all know Rory too well and Jess knows Rory too well. He can't be chill like Logan. Finally, the explosion that Rory needed takes place:

And this is the point: if Jess just wanted to curry favor with Rory, he's smart and adult enough now to know to be sweet to her and pay her compliments. But he cares about her too much and knows her too well. He just can't do it. And this is precisely what Rory needs: Someone to tell her what's what, because no one else would.

Jess has a certain integrity, and it's this integrity we see in this episode that Rory needs when she hits a low. Sure, he can be rough around the edges — but with his instinct for what she needs and low-tolerance for pretension, he acts as Rory's moral compass. So sure, he could be a real pain as a troubled teenager. But as an adult? This episode displayed perfectly that he and Rory were really two halves of a whole.

More like this
“The Door Is Always Open” For Another 'Breaking Bad' Spin-Off, Says AMC Boss
By El Hunt
Vanessa Hudgens Proves She's Always A Wildcat At This 'High School Musical' Location
By Alyssa Lapid
What Is the Net Worth Of Each 'Stranger Things' Season 4 Cast Member?
By Hugh McIntyre
The 'Hocus Pocus' Sequel Finally Has A Release Date & It Makes Total Sense
By Shannon Barbour and Radhika Menon
Get Even More From Bustle — Sign Up For The Newsletter