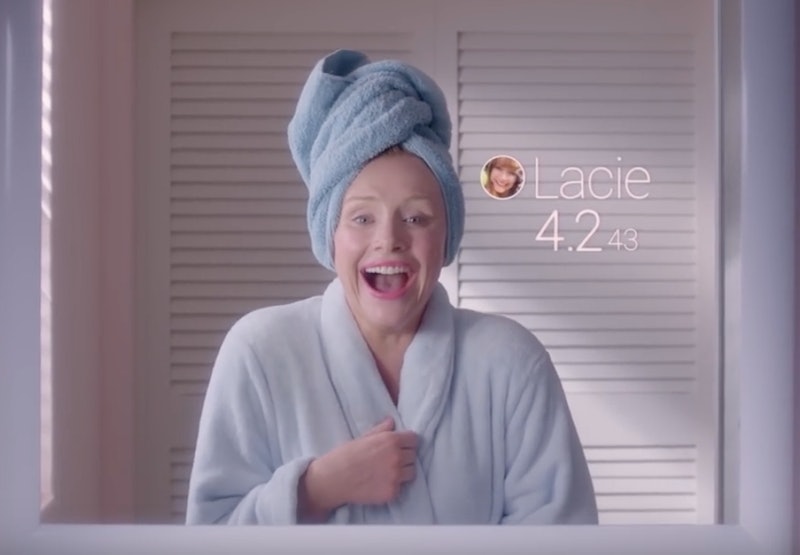 Ever since the deeply unsettling trailer for Season 3 of Black Mirror dropped in Oct., the fires of curiosity from the show's fans have been stoked to an even greater degree. While we had slow drips of information in the form of episode synopses and promotional images, the trailer really solidified feelings that what was in store for Season 3 would push thematic boundaries and seek to better parallel our modern world. Now, Netflix has released two Black Mirror featurettes covering the first two episodes, "Nosedive" and "Playtest," complete with insightful commentary from the show's creator and writer, Charlie Brooker. What new pieces of information did Brooker offer up on these episodes and the new season? He may have spoken sparingly, but Brooker has only added to the intrigue of what's to come in Season 3.

Brooker characterizes "Nosedive" as "a satire on acceptance and the image of ourselves we like to portray and project to others." Bryce Dallas Howard will play the central character in the episode, Lacie, who Howard tells us has "lost herself in a world where she thinks her worth is equivalent to her points." That point system, from the looks of the featurette, will come into play whenever people interact. Lacie herself gets a two-star rating from a stranger and appears to be truly upset by it.

"Nosedive" looks like it will be an altogether jarring episode, with its very sunny appearance mixing with the darker practices of rating one another on a points system. "Everyone is a little bit heightened and false, because everyone's terrified of being marked down because the consequences of that are unpleasant." If ever there was a way to present the theory of the uncanny valley, it looks like "Nosedive" will do it.

"Playtest" gets classified by Brooker as a "techno-horror romp" taking place within a video game company and centering on Cooper, an adrenaline junkie and thrill-seeker who likes to live life to the fullest. Given Cooper's tendency towards excitement at every turn, something tells me that things will not end pleasantly, especially after being told to literally whack a video game mole. What kind of nefarious game development has Cooper gotten himself into? Why is there footage of a giant spider scaling buildings? What's the deal with that very disturbing poster we see in the featurette of a very pained, terrorized face?

I think its fair to say my excitement for Season 3 have increased tenfold. All the macabre, socially-relevant elements are coming through in these two new featurettes that have made Black Mirror must-see television. What will be doubly interesting is to see how the evolving issues between technology and society have been translated yet again for the small screen. But if "Nosedive" and "Playtest" are our barometers, then I'm not worried for Black Mirror's success in the slightest.