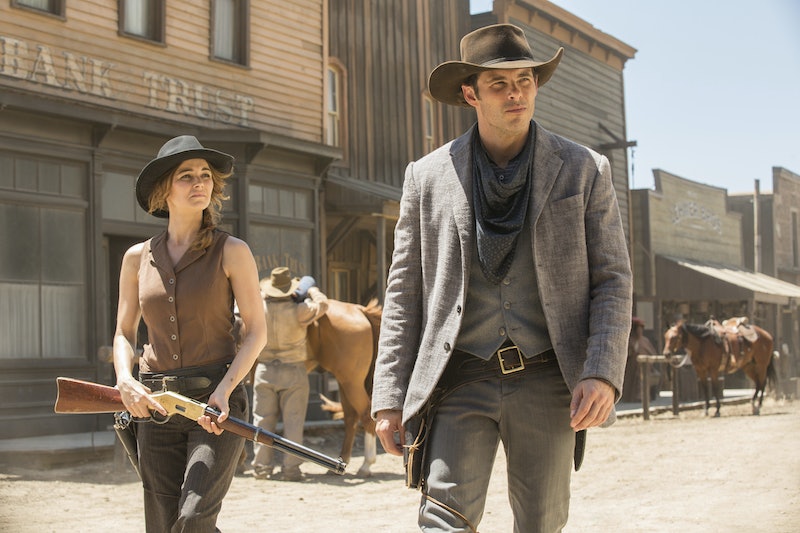 The third episode of Westworld's mind-boggling debut season is all about history. While many of the hosts and employees of Westworld confront their pasts over the course of the Oct. 16 episode, one character is given a past for the first time. During maintenance, park creator Ford admits to Teddy that his only purpose in the park was for people to steal Dolores away from him. Ford explains that Teddy was programmed to feel pangs of guilt, but that the developers never actually wrote a backstory explaining where that guilt comes from. Deciding to change that, Ford gives Teddy a new backstory that leads to an exceptionally intense narrative all surrounding a potential new Westworld villain: Wyatt.

Wyatt — likely a reference to the real Wyatt Earp, one of the most famous figures of the Old West — and Teddy's history may be newly created, but it has taken deep roots in Teddy. In his mind, Wyatt was one of his closest friends and his sergeant in the army. That is, until Wyatt went missing and came back weeks later with "some pretty strange ideas" that caused him to snap and kill the entirety of Teddy's battalion. Teddy also notably mentions that Wyatt "claimed he could hear the voice of god." Because of all this, Teddy has sworn revenge on his former friend, which leads him towards the outer rims of Westworld.

Since his mysterious disappearance and violent return, it seems that Wyatt has amassed a group of masked killers dedicated to wiping out settlers all throughout Westworld. Teddy's attempts to find Wyatt and take him down are exceptionally intense as far as Westworld experiences go, as many of the guests who join him opt to leave at some point during the story. The story ultimately ends in Teddy's death, making it three out of three times that Teddy has died in an episode of Westworld. Even when he has a whole new story crafted specifically for him, it seems that Teddy just can't catch a break.

But as Teddy described it, Wyatt breaking from reality is alarmingly similar to Dolores, who is last seen taking up arms against those who would usually harm her and seems to be becoming more self-aware. Could Wyatt's murderous story and violent group be a sign of where Dolores is headed? Perhaps Westworld is adding more villains than we think.