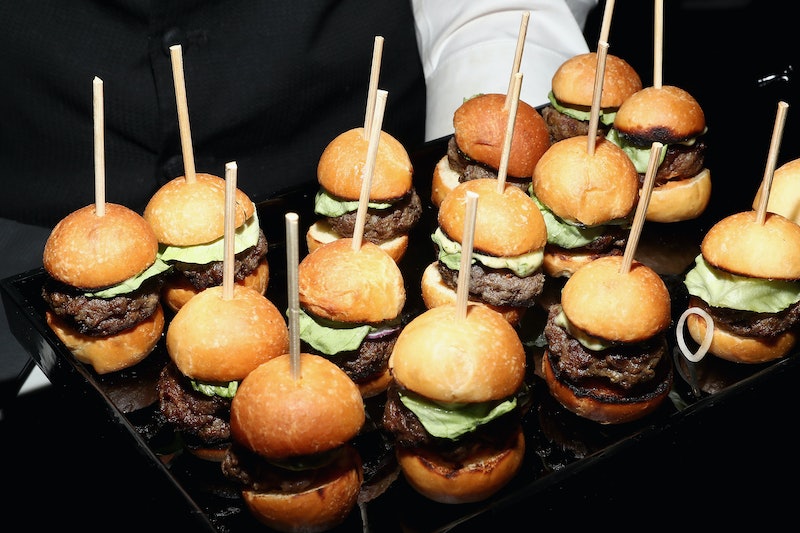 From compressed noodle buns to wrapped-in-gold beef patties, "the burger" has undergone some serious changes in the past few years. But how far is too far when it comes to recreating an American classic? The most recent burger mutation is the 10,000 calorie ULTI-MEATUM (yes, all-caps are necessary), which a UK restaurant modeled after a meal from the Cartoon Network series The Regular Show's episode "The Best Burger In the World." In honor of this incredibly gluttonous development, we've rounded up a few of the sandwich's most extravagant variations. Here are seven of the most ridiculous burgers in existence:

As reported by The Daily Mail, The ULTI-MEATUM — or as I like to call it, the Inception of burgers — is a burger, within a burger, within a burger. Yes, inside one of those patties is an entire burger, which is then placed between two more entire burgers. This Cartoon Network-inspired tri-burger is £20 (or about $33) — unless you can finish the whole thing, in which case it's free. Should you be interested in all 10,000 calories of the ULTI-MEATUM, visit Mister Eaters restaurant in Preston Lancashire.

I think it's safe to say that 2013 was the year for cult-y hybrid foods, one of the more popular (and most Instagrammed) being the Ramen Burger. Invented by Keizo Shimamota, a computer-programmer-turned-Ramen-connoisseur, the Ramen Burger is comprised of a chuck beef patty nestled between "two discs of compressed noodles." A secret sauce is also involved. Due to instant hype, customers waited in line for 3+ hours to purchase and hashtag their very own Ramen Burgers. Though currently vending out of Smorgasburg in Brooklyn, Ramen Burger plans on opening full-time operations in New York, Los Angeles and Honolulu this year. Noodle buns for all!

If you’re one of those people who always pays the extra three dollars to get bacon on your burger (me too!), this one is for you. The folks at Foodbeast challenged Slater's Bacon 'Merica Burger and created the 100% Everything Bacon Burger. No seriously, everything in it is made from bacon: there's a bacon infused bun, a bacon burger patty, bacon wrapped onions, a bacon encrusted fried egg (drool), and of course bacon strips and bits everywhere. The best part? They posted a recipe of this creation of creations so you can make your own bacon on bacon on bacon on bacon burger at home. Or maybe Foodbeast will do us all a favor and open a 100% Everything Bacon Burger food truck. Just a suggestion, Foodbeast...

If Scott Disick was a burger, he would be the Douche Burger. Seriously though, you don’t even know just how douche-y the Douche Burger really is. First of all, it’s $666. Eye roll. Also, it’s got lobster, caviar, and truffles on it. Groan. For the encore: the patty — which has been stuffed with foie gras — is wrapped in gold. As in, if you eat this thing, six sheets of gold leaf will live in your GI track for an unprecedented period of time. Facepalm. If you’re into the idea, go check out NYC’s 666 Burger food truck. I’d also suggest putting another $666 into your Douche Bag Jar, or starting one if you haven't already.

What could possibly out-douche the Douche Burger? The $5,000 FleurBurger, of course! What's so special about it, you ask? Well, the burger is comprised of wagyu beef, foie gras, and truffle with a bottle of 1995 Chateau Petrus (which is a really fancy Bordeaux, if you’re like me and know nothing about wine) on the side. Created by Hubert Keller, who you may know from Top Chef Masters, the FleurBurger 5,000 is available for order at Fleur, a restaurant in Las Vegas’ Mandalay Bay. So the next time you’re in Vegas, and would rather not blow all of your money on gambling, spring for a burger instead!

This one is subtle, yet possibly the most evil of them all. The Luther Burger is...a donut burger. Yes, instead of a bun, the burger's contents are cradled between two glazed donuts — preferably Krispy Kremes. Though the Luther Burger's origin isn't entirely clear, it was supposedly named after Luther Vandross, as highlighted in an episode of The Boondocks. You can order the Luther Burger on and off menus across the states, including at the Tipsy Parson in Manhattan. Or just, you know, get a dozen glazed and make them at home (and invite me).

The Double Coronary Burger is basically five meals in one. It includes: a half-pound sirloin patty topped with two fried eggs, six slices of American cheese, and eight slices of bacon, all wedged between — wait for it — two grilled cheese sandwiches rather than buns. When you think about it, that’s breakfast, a couple lunches, and dinner all in one. It also comes with “plenty of mayo” on the side — because if you're ordering something with the word "coronary," in it's name you might as well slather another layer of fat on it. For the low, low price of $16.95, you can try a Double Coronary Bypass Burger at The Vortex Bar and Grill in Atlanta, Georgia. May you live to Instagram the tale!

More like this
Starbucks Released New Menu Items For The Summer
By Emma Garza
A Beginner's Guide To Drinking Whiskey
By Alexis Morillo
How To Make The Watermelon, Feta, & Mint Salad Trending On TikTok
By Emma Garza
The 5 Best Containers For Overnight Oats
By Ileana Morales Valentine
Get Even More From Bustle — Sign Up For The Newsletter