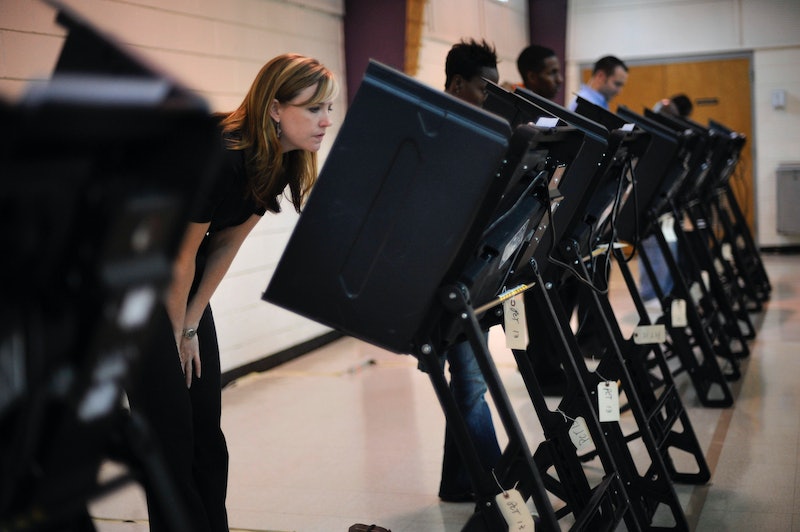 With the next U.S. president expected to fill at least one vacant seat on the Supreme Court, there's a lot at stake in this election. While the simple act of voting is an integral component to the democratic process, it remains a sadly under practiced activity, due in some parts to the hurdles eligible voters are required to jump over. It's not enough to want to vote, you have to know when are where to cast your ballot if you want your vote to count. Most importantly, that will involve finding your election precinct before Election Day.

Voter turnout in the United States is notoriously low, even in presidential election years. In 2012, for example, only 57.5 percent of eligible voters turned out to vote, a noticeable drop from the 62.3 percent who'd headed to the polls during the 2008 presidential election and the 60.4 who voted in 2004, according to the Bipartisan Policy Center. For some voters, it's a lack of information — knowing when, where, and how to cast a ballot — that keeps them away from the polls on Election Day.

Knowing where to vote is just as important as knowing when. (Although you seriously don't want to heed Republican nominee Donald Trump's call to get out and vote on Nov. 28 — you'd be 20 days too late!)

Thanks to the internet, it's easier than ever to determine your election precinct and polling place. You can check your voter registration and quickly determine the election precinct you live in to locate your polling place online in under five minutes on a variety of different websites. In most cases, all you need to know is the address you're registered to vote under.

One of the easiest ways to locate your election precinct is through the official website for your state's secretary of state. Google is also helping voters learn where to vote with an easy-to-use tool. Just enter your address and let the search engine pull up the address and directions to your assigned polling location. Democrats, Republicans, and independents can also use the Democratic Party's Polling Place Locator, the Rock The Vote campaign, or the League of Women Voters for assistance.

With a myriad of resources for locating where you'll cast your ballot on Election Day available to voters, there's really no excuse for not knowing your election precinct and polling place location. Time to get out and vote.