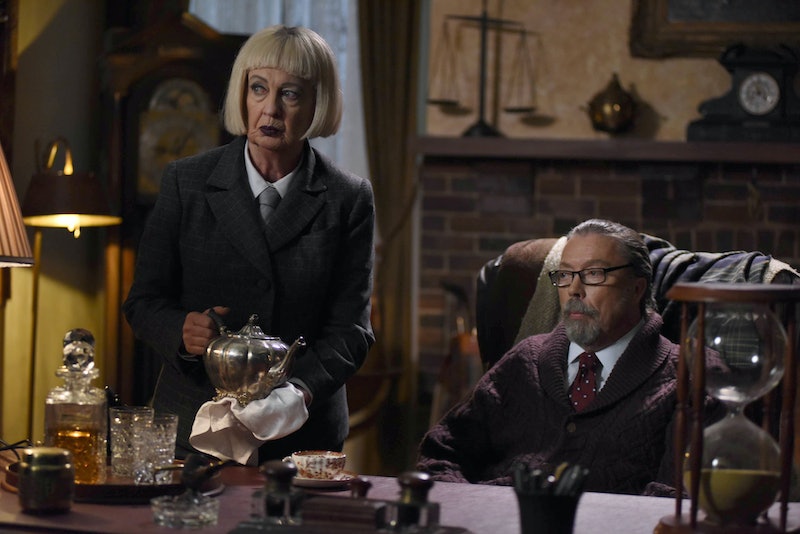 FOX's Rocky Horror Picture Show reboot may not be a live musical, but that doesn't make taking on a cult classic like this one any less intimidating. From the singing to the costumes to whatever changes have been made, everything in this version of Rocky Horror will undoubtedly be compared to the original. That makes it important to ask — will any of the original cast be in FOX's Rocky Horror remake? It would be an easy way for the remake to prove that it's being done with the legacy of the original film in mind.

For the most part, this remake is forging his own path, because the original cast will not be making an appearance — with one major exception. According to Vanity Fair, the original Dr. Frank-n-Furter, Tim Curry, a living legend and an amazing performer, will be playing the Narrator in the remake, despite being wheelchair bound after suffering a stroke in 2013. As he joked in a roundtable talk covered by Vanity Fair, "I actually offered myself as Dr. Scott, because I was already in a wheelchair. They thought the Narrator was a better fit, and I enjoyed it a lot." Curry's performance in the original film is truly iconic, and he gave Laverne Cox the seal of approval to take on his role. Director Kenny Ortega told Vanity Fair that after Cox's initial rehearsal, "the first voice that came up was, 'Brava,' from Tim Curry."

But the rest of the original Rocky Horror cast won't be involved in this new production. Actually, most of the group have been against the idea of a remake for the past decade. According to USA Today, Barry Bostwick, who played "the hero" Brad in the original, a role that now belongs to Ryan McCartan, was firmly opposed. Bostwick told USA Today that not only is he against a remake, but he claims the fans he's talked to at Rocky Horror Picture Show screenings allegedly are too. "I don’t see how they can do it," Bostwick said. "I don’t see how they can make it any better than the original and I don’t think the fan base wants it. They love it the way it is. ... It’s a grunge experimental theater piece, and it has to have that rough around the edges feeling to it."

A quick search on Twitter shows that many fans are excited about the FOX version, and it seems a bit unfair for Bostwick to speak for the fandom as a whole. It seems best to wait and see what the reaction is like once the show airs on Thursday.

As for the other major stars, Susan Sarandon is probably the most famous person from the original cast, as an Oscar-winning actress and the original Janet, the sweet heroine. Getting her into the remake would have been a huge coup — so the fact that FOX hasn't played up a cameo appearance and Sarandon hasn't teased one means that it's probably not happening.

But, while he's not a member of the cast, Variety reported that Lou Adler, who produced the original film, will be returning for the remake. This shows that while there isn't much overlap between the original film cast and this TV remake, there are a few crucial people who are joining the new version. But, overall, the 2016 Rocky Horror Picture Show will have to rely on its hyper-accurate recreation of the original's details and the talent of its new, young cast rather than a bunch of cameos from the film's original performers.