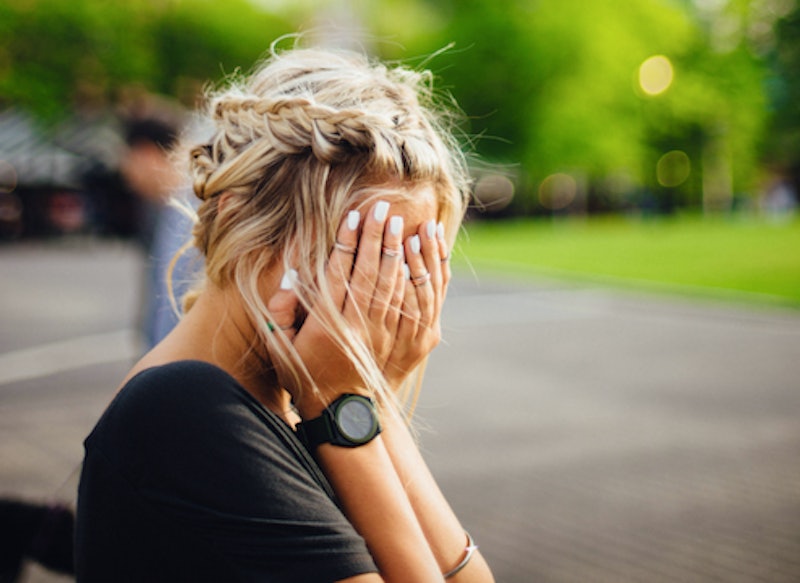 When someone seeks attention, only cares about themselves, and steps on the toes of others, we are quick to call them a narcissist. However, there are a number of other personality disorders that seem like narcissism, but are actually much more serious. If you or someone you know seems like they may have a personality disorder, it's important to know the signs of something bigger, rather than someone who just likes to stare at themselves in the mirror all day.

Personality disorders that seem like narcissism usually fall in the category of "Cluster B" personality disorders. "This cluster describes individuals who appear emotional, erratic, or dramatic," says Dorian Crawford, PsyD over email. Disorders in this cluster share problems with impulse control and emotional regulation.

What's important to remember is that everyone displays traits found in these disorders from time to time, but these traits have to be regularly observed for them to be a personality disorder. Plus, they must also impair a person's ability to socialize or cause them distress to be considered a disorder.

That being said, if you or someone you know seems like they might be a narcissist, but you're afraid it may be something bigger than just something like vanity, consider these four personality disorders that seem like narcissism, but are more serious conditions.

Just because someone loves posting pictures selfies on Instagram doesn't mean they have a personality disorder. We sometimes use the word "narcissist" lightly, but someone with a slight ego doesn't necessarily have a mental disorder. "The people who are diagnosed with this disorder have an exaggerated sense of self-importance, may be preoccupied with fantasies of limitless success, power, brilliance or beauty, and require excessive admiration," says Crawford. "They are unwilling to recognize the needs or feelings of others, are envious and feel envied and are arrogant and haughty.

Like people with NPD, people with Antisocial Personality Disorder show no regard for right and wrong and ignore the rights and feelings of others, according to Mayo Clinic. They also tend to antagonize, manipulate or treat others harshly or with callous indifference. However, unlike narcissists, people with Antisocial Personality Disorder often engage in illegal behavior and get into physical fights with others. "Many people who have been convicted of violent crimes, like serial killers, have been diagnosed with this disorder," says Crawford.

People with BPD and NPD can both exhibit erratic, dramatic, and emotional behaviors, according to the Diagnostic and Statistical Manual of Mental Disorders (DSM-IV). They have a tendency to believe the world revolves around them, they have a constant need for attention, and both fear abandonment. But someone with BPD has a much more unstable sense of self, and they engage in more self-harming behaviors, according to Crawford. "They tend to experience a chronic feeling of emptiness, have a lot of trouble controlling their moods, such as being easily angered and irritable, and are highly impulsive," she says. "They may also be paranoid and even lose touch with reality."

Someone who always has to be the center of attention may seem like a narcissist, but they may actually have Histrionic Personality Disorder. These people have a self-esteem that depends on the approval of others and does not arise from a true feeling of self-worth, according to WebMD. "They may dress and act in ways to draw attention to themselves and think relationships are more intimate than they really are," says Crawford. They often dress proactively, display inappropriate behavior, and sometimes even threaten dangerous behaviors such as suicide to get attention.

If you think you or anyone else you know may have one of these disorders, it's best to see a licensed professional to help get a correct diagnosis.

More like this
I Was All For Medicating Mental Health Issues – Just Not For Me
By Anonymous, as told to Dana Smith
6 Abortion Advocates To Follow On TikTok
By Sara Youngblood Gregory
The Best Underwear For Sensitive Skin, According To A Dermatologist
By Alexa Vazquez
The UK Abortion Laws In 2022, Explained
By Sophie McEvoy
Get Even More From Bustle — Sign Up For The Newsletter