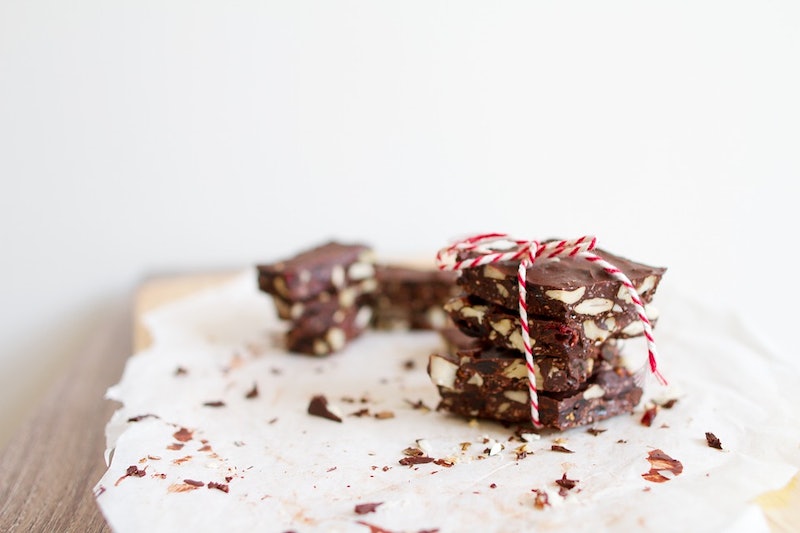 We've all heard the idea that dark chocolate is good for you; but it's only recently that we've identified what, precisely, might be giving us any health benefits. It turns out the culprit is likely flavanols, naturally occurring compounds that seem to interact with different parts of the human body in ways that, science reveals, look good for our overall health. Now a new analysis of 19 different studies on cacao's flavanols and how they work has revealed further evidence that there's a big relationship between flavanols and heart health. But there are many reasons why this doesn't mean that anybody, particularly those with a history of or predisposition to heart disease, should start stocking up on 90 percent artisanal bars immediately. Is chocolate really good for you, or are the benefits overstated? To find the answer, we have to look at the science.

Flavanols don't just show up in cacao (they also show up in wine, for instance), but their presence in the base ingredient for chocolate is what's attracted the most interest, for the very good reason that it's a marketing bonanza. A lot of the science on flavanols has been done by the Mars Center for Cocoa Science in collaboration with other researchers, because commercial interests have a high stake in whether these compounds really do have health benefits. The idea of chocolate as a health food, however, is still in its early stages; and for various reasons to do with the processing of commercial chocolate products, flavanols might not be as available in your local supermarket confectionery aisle as you might think. So no, you cannot just go through your Halloween candy eating all the chocolate for "heart reasons".

Here's the science you should know about chocolate and health, in case you want to impress everybody with a lecture on cardiovascular blood flow as they debate the values of Lindt over Kinder Eggs.

What The Studies Say

This new study itself didn't do any testing of its own: it's a meta-analysis of 19 different studies of flavanols, a type of flavonoid compound found in the cacao bean, and their impact on different "markers" of cardiovascular health. Altogether, the 19 studies tested the impact of flavanols on 1,139 people: still a pretty tiny group by scientific standards, but significant enough to make a good case for further study.

The studies for this latest review were mostly focused on how flavanols might be able to help the body avoid developing cardiovascular problems, and the results, when tallied up, were pretty heartening (sorry). The meta-study found that, overall, flavanols seem to "reduce dyslipidemia (elevated triglycerides), insulin resistance and systemic inflammation, which are all major subclinical risk factors for cardiometabolic diseases."

Let's unpack those one by one. Triglycerides are a type of fat found in the body as a result of diet and the action of the liver, and generally tend to spike in the blood following a fatty meal. High levels of triglycerides around the clock are regarded as a marker for possible heart disease. People with insulin resistance, meanwhile, aren't responsive to the hormone insulin, creating the conditions for type 2 diabetes and problems with metabolism to occur. And systemic inflammation has been determined, by various studies, to be a really good indicator that cardiovascular problems will show up further down the line, likely because of stress on the body's functions. Flavanol's capacity to reduce any of these conditions, let alone all three, is a pretty giant mark in its favor.

We're not entirely sure how exactly flavanols pull off this magic trick. An expert told Harvard Health that "flavanols facilitate brain cell connections and survival, and protect brain cells from toxins or the negative effects of inflammation,” which is likely part of the answer. It seems to be a powerful antioxidant, combating the effects of oxidization on various parts of the body, but the precise ways in which it works on our cells and internal functioning are a still up for scientific investigation.

This isn't the first study collection to point at the flavanols in cacao beans as a serious health benefit. Scientific American, back in 2013, suggested that cacao beans might be "the brain drug of the future" after a study suggested that ingesting a high-flavanol cocoa drink helped cognitive function in people who were showing early signs of Alzheimer's diseases. And the International Journal of Medical Sciences published a study back in 2007 that looked at the potential for flavanols to increase blood flow to the brain, increasing memory and creating better cardiovascular function. (That study was based, interestingly, on work with the Kuna Indians of Panama, who are high producers of cacao and who are 1,280 percent less likely to die of heart disease than other Panamians.)

Unfortunately, this isn't the beginning of dark chocolate as a maintenance strategy for heart disease sufferers. The key ingredient required for medical help, flavanols themselves, are often not actually present in commercial chocolate. Medscape points out that flavonols can often be stripped from the cacao bean in the process of making it into chocolate, even in dark chocolate. It's a mistake to believe that higher-cocoa chocolates mean more flavanols; a study from 2016 at the University of Reading found that there's actually no real correlation between flavanol levels and cocoa percentages. While milk chocolates did have fewer flavanols than dark chocolates, the flavanol levels didn't continue to increase as you went up the percentage scale; 90 percent chocolate was found to have around the same flavanol amount as 50 percent. (The researchers didn't publish the levels of the flavanols they tested, as all tests were anonymous.)

The other thing to remember, as the scientists in charge of the meta-analysis reminded us, is that the 19 studies are still very small, and can't be used for big conclusions just yet. The next big stage for chocolate lovers is the multi-year scientific study called the COSMOS trial, which is conducting experiments using 18,000 different American adults to see whether flavanol, ingested at a rate of 600 mg a day, can actually cut our likelihood of heart attack and stroke. We won't see the official results until 2020 at the earliest, and then it will likely be followed by further trials about whether flavanols interact with blood pressure medications, whether they work better in men or women, and all the normal scientific fuss that goes into proving whether a remedy may actually work.

So Is Store-Bought Chocolate Any Good For You Or What?

There's currently no legislation for chocolate-makers to publish flavanol levels on packaging, and manufacturers are likely hoping that "dark equals healthy" will be enough for consumers. Supplements that claim to be flavanol-heavy may also be unregulated, so beware of them. Raw cacao beans and nibs are probably your best bet here for reaping all the benefits.

If you aren't willing to go out into the world to search for raw cacao products, and prefer to stick to your standard supermarket confectionery aisle, all is not lost. Normal chocolate, numerous studies have shown, produces a spike in endorphin levels in the body as the brain's pleasure centers are stimulated. Not only is this a positive for your mood, it's also capable of reducing your perceptions of pain. Intriguingly, a study in 2010 found that the more chocolate people ate, the more likely they were to be depressed, but the scientists didn't know whether this was because depressed people were constantly in search of mood-boosting endorphins or if there was some other problematic mechanism at work.

Researchers have noted, in roundups of ordinary chocolate's health qualities (which, in small-scale studies over short periods, indicate brief benefits for stress, blood pressure and stroke risk), that scientific studies on the benefits of chocolate don't often focus on the downsides of its sugar and fat content. They're looking at flavanoids without accounting for the potential damage of the baggage regular chocolate carries. Flavanols by themselves may well have acute benefits, as we're gradually discovering, but it's usually recommended that ordinary chocolate remain a treat rather than a health essential.

So if you really want to experience the wonders of a flavanol hit, the best way to do it is to get onto a clinical study and have scientists mix you a cup. Otherwise, unfortunately, anything short of raw cacao beans may not give you much of a taste of them.

More like this
This Company Will Send STI Tests Right To Your Door
By Lexi Inks
How Long Does Leftover Stuffing Last? Here's When To Toss It
By Chelsey Grasso and Alexis Morillo
Pepsi’s Festive Flavour Is Finally Coming To The UK
By Sophie McEvoy
Heinz Just Relaunched A Bean-Tastic '90s Fave
By Sam Ramsden
Get Even More From Bustle — Sign Up For The Newsletter