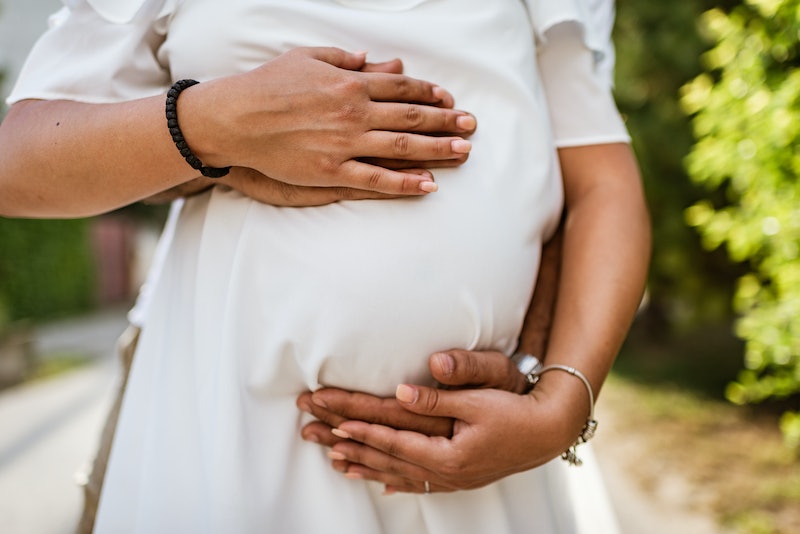 Thinking of waiting to have a baby until you're over 40? You're not alone, as a glance at celeb news will tell you; Janet Jackson has just confirmed her first pregnancy at the age of 50, and Halle Berry had her last child at 47. It's increasing in frequency among non-celebs, too. In the UK, something remarkable has happened: over-40s women are now having more babies than women under 20, something that was last recorded in the 1940s. That reflects a lot of factors, from women having more education to their position in the workforce and increasing health and nutrition, plus, of course, the range of options for artificial fertility, like IVF and intracytoplasmic sperm injection. But it also gives a more interesting picture than the one we've traditionally been told: that anything over age 35 is a wasteland for fertility, leading to high-risk pregnancies, failed IVF cycles, and infants with birth defects. The reality of whether getting pregnant over 40 is safe, it seems, is more complex, and there's a lot of science to unpack about why.

It's not realistic to believe that fertility lasts forever; it doesn't. But contemplating getting pregnant and having a healthy child over 40 is no longer the unfamiliar territory it once was. Science seems to indicate that pregnancies up to the age of about 43 (and beyond) may well be more problematic, but that they don't always have to be, and that the end result is very likely to be a healthy child if everybody knows what they're doing. It's an area that needs significant investigation if this is what you're contemplating, but be assured that it's no longer a hopeless case.

This is what the science says, right now, about having a baby after 40.

IVF Might Be A Better Option For Healthy Births

A new study released this week has revealed that, when it comes to pregnancy over 40, it might be a better idea to use assisted fertility measures (IVF and sperm injections, in other words) than to get pregnant naturally when it comes to actually having healthy babies. The scientists, from the University of Adelaide, looked at 301,000 naturally conceived births, 2200 IVF babies, and 1400 ones from sperm injection, and found that, contrary to assumed wisdom, birth defect rates were actually lower in women over 40 who had assisted pregnancies than those who conceived naturally. They're not entirely sure why, though it may be to do with higher levels of medical care.

It's a bit of a shock, but it turns out that it's much less risky for the baby to have IVF treatment if you're over 40 than it is to try to get pregnant the old-fashioned way. This is a big deal for people considering having babies over 40, because it rejigs the traditional wisdom: natural isn't necessarily the best option. It remains necessary to note, however, that other studies raise the distinct possibility of a higher rate of birth defects in infants born to women over 40, both natural and IVF, than those born to younger women. IVF might be a better choice, but it doesn't eliminate risk completely.

Fertility Itself Remains A Tricky Question

The notion of fertility itself (the ability to get pregnant, as opposed to carrying a healthy child to term) as something that rapidly drops after the age of 35 has some validity, but it isn't anywhere near the hard-and-fast rule it may seem. It's actually based on a set of data from the 1700s, unbelievably enough; the study was reproduced widely and was, for unknown reasons, taken as a gospel commentary on women's fertility until quite recently. It dates from a time when the life expectancy was lower, nutrition and health care were radically different, and societal support for women's health over their lives was much less thorough than it is currently, and is therefore likely not completely applicable to what we're going through now.

Rebutting it, the BBC noted a 2004 study of 780 women that found that 82 percent of women between the ages of 35 and 39 successfully conceived within a year. Over 40, however, there does seem to be a distinct decline; the American Society for Reproductive Medicine estimates that women over 40 have only a 5 percent chance of getting pregnant naturally per cycle.

The fundamental question with fertility, it seems, is not with the uterus, which can often carry healthy babies well with considerable medical attention; it's with eggs. LiveScience mentions a study from 2009 that suggests that 43 is likely the cutoff for women seeking IVF using their own eggs, and that healthy IVF implantation after that point will likely require donor eggs. Thirty-five-year-olds have a 41 percent chance of success at IVF, while people over 42 have around a four percent chance. (If you're thinking of freezing your young eggs for use later, this is something to keep in mind: USC Fertility makes it clear that, while it's likely that the younger you freeze your eggs the better, statistics are still lacking about successes for women who have frozen their eggs over 40, and might actually be pretty good. Frozen eggs don't have a huge rate of success, though.)

Here's something that will make you cheerier if you're contemplating getting pregnant over 40: a thorough study in 2015 found that there were higher likelihoods of various problems in over-40s women, but suggested that they were all capable of being solved with a vigilant doctor, regular check-ups, good management of pre-existing diseases, and careful delivery. It's actually pretty good news, because the overall conception of pregnancy and childbirth in older women is often one of danger and struggle. The scientists, who collected a huge swathe of maternal data from the Department of Obstetrics and Gynecology of the University of Wuerzburg from 2006-2011, compared pregnant women of all ages, and found that pregnant women over 40 are indeed more likely to have gestational diabetes and preeclampsia, more likely to have caesarians, and often required longer hospital stays. But, the doctors noted, these were all factors that could be combatted.

"The outcomes of pregnancy and childbirth and for newborns born to women over 40 years," the scientists wrote, "did not vary significantly from those of younger women if the following conditions were met: a) pre-existing chronic diseases were treated medically and dietetically; b) pregnancy-induced morbidity was monitored regularly and controlled medically; c) women attended regular prenatal check-ups; d) a healthy lifestyle was adhered to during pregnancy, and e) delivery occurred in a perinatal center."

This means that pregnancy over 40 isn't something to be taken lightly and will require significant time and medical investment, but that it's not inevitably more difficult in the end. And, interestingly, women who became pregnant via IVF over 50 had around the same levels of complications, according to a study from 2012, as women under the age of 42 who'd had the same procedure.

... But Your Own Health Might Be Compromised With Older Births

The problem with older births isn't necessarily, it seems, with the baby; it increases the risks for your own health. A study by the American Stroke Association released earlier this year demonstrated that women who have babies over 40 face a greater risk of stroke and cardiovascular issues later in life. It's worth noting, though, that they were only measuring the risk group against women who'd had children at a younger age, not women who hadn't had kids at all, so we don't exactly have a complete picture of the problem. Experts have also noted that, although there isn't any firm science at the moment, there's occasional worry about the potential of late-in-life pregnancy to stimulate hormonal development that might spark breast cancer. And you'll note that, in the study of healthy births over 40, it makes a priority of the idea that "pre-existing conditions" need to be on the table and treated properly; many of the difficulties experienced by pregnant women over 40 seem to be due to issues from other illnesses and health problems that bleed into the pregnancy.

So what's the take-away from this? Scare stories about having a baby over 40 are likely a bit exaggerated, but it's definitely not something to go into without a lot of forethought, money put aside, and an excellent medical team on your side.

More like this
The Best Time To Date After A Breakup, According To Experts
By Bustle Editors
Why Experts Say Sleeping With A Fan On Isn’t Totally Risk-Free
By Sophie McEvoy
Chrissy Teigen Is Pregnant After Resuming IVF Following Her 2020 Pregnancy Loss
By Grace Wehniainen
Jennifer Coolidge Needs 'Legally Blonde 3' To Happen So She Stops Getting Hot Dog Jokes
By Jake Viswanath
Get Even More From Bustle — Sign Up For The Newsletter