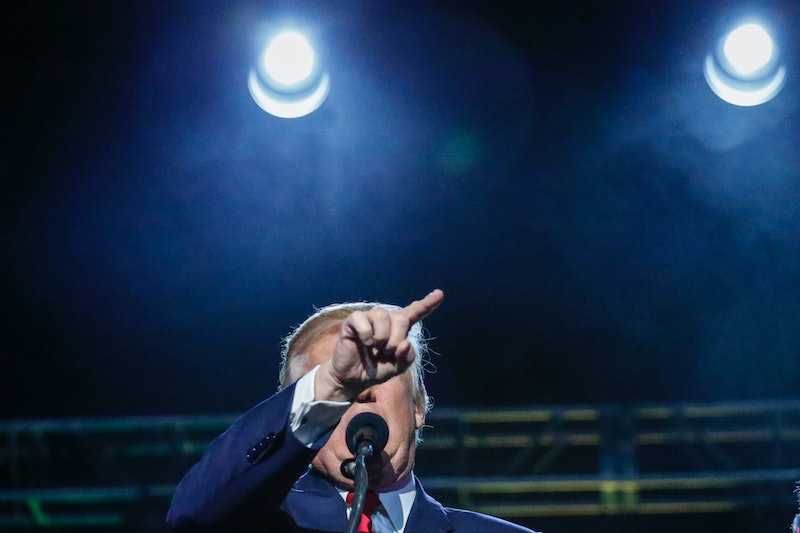 Another day, another outrageous claim — it seems to be the pattern of this election. In this case, Donald Trump responded to the firebombing of a North Carolina Republican Party office with a tweet blaming, of course, the "animals representing Hillary Clinton and Dems in North Carolina." Take a deep breath. Shake it off. The Republican nominee for president didn't just blame his opponent for a horrendous crime without any evidence to back it up, did he? But wait — this is 2016, and the Republican nominee for president is Donald Trump, and yes that is exactly what he did.

The bombing happened early Sunday morning in Hillsborough, North Carolina, very fortunately at a time when no one happened to be there. The damage included a broken window from someone throwing in some sort of Molotov cocktail, creating substantial fire damage in the office's interior. Most troublingly, the perpetrator of the crime also wrote "Nazi Republicans leave town or else" on a building next door, although that has since been painted over.

Politicians across the state and both parties immediate weighed in to condemn it. Republican Gov. Pat McCrory called it "an attack on our democracy", Hillary Clinton said it was "horrific and unacceptable," and Hillsborough's Democratic mayor Tom Stevens said that "its hateful message undermines decency, respect and integrity in civic participation." None of them, however, ventured to make a claim about who had actually committed the crime, as the authorities have yet to discover a suspect.

This is nothing new for Trump's Twitter feed, which he has used to propagate his pet theories about the media rigging the election and to remind his followers of his belief that Hillary Clinton should be in jail.

But just for a thought exercise, let's imagine what would happen if Clinton had claimed that a group of Trump supporters had bombed the GOP office in order to frame her and her campaign. In all likelihood, it would ignite a Twitter firestorm the likes of which we have never seen, not even from him. His assertion, however, is exactly as valid as that hypothetical one would be, in the absence of any evidence one way or the other.

North Carolina, of course, is an especially tense state for this to happen in. The New York Times' Upshot Forecast reports that Clinton currently has about a 65 percent chance of winning the state. Hillsborough, the town where the firebombing happened, is in Orange Country — a county where there are three times as many registered Democrats as Republicans, perhaps not surprising as it is also the home of the University of North Carolina at Chapel Hill.

Hopefully, the police will find the person who committed the crime soon and settle the matter. Unfortunately, it's probably safe to assume that no matter how ridiculous and defamatory Trump's claim about Clinton's involvement in the whole thing is, he'll be using it at campaign events from now until the end of the election.