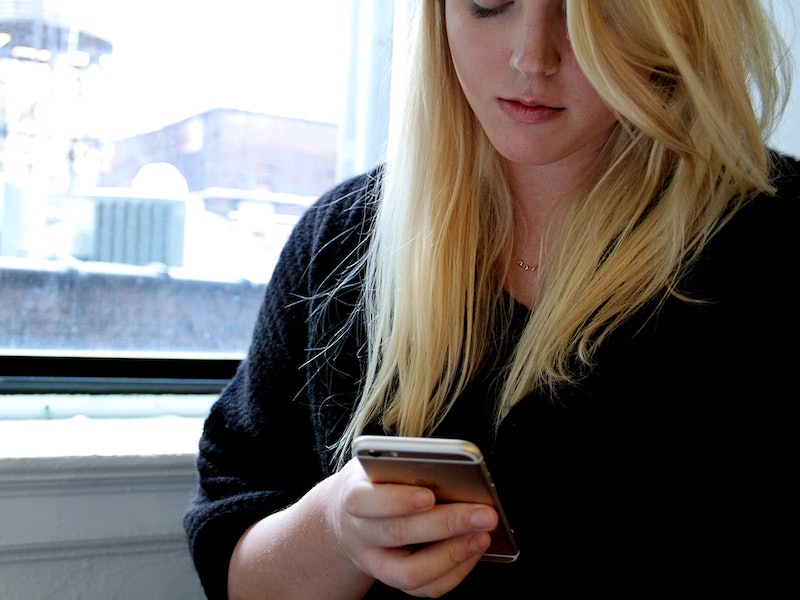 The first time my doctor told me to stop using Google to diagnose myself, I just had a bad headache. No, not the "worst headache I've ever felt in my life" (I know what that symptom means by this point — I'm no WebMd amateur), but just a headache when, well, I usually don't get headaches. "So how did it feel exactly?" my doctor asked. "Well... weird. I would say very weird," I answered. She said we could do an MRI to rule out XYZ problems, and that "Dr. Google" wouldn't be much help in arriving at a diagnosis — but what she had to say didn't matter to me much given that I already so clearly had a brain tumor. According to, you know, the internet. And my own irrational health anxiety.

Even before people were paying me to be on the internet all day, my hobby was to be on the internet all day. And at some point in college, I realized just how easy it was to toggle between my Tumblr account and a Yahoo Answers forum labeled, "Can you die from losing a toenail?" (You actually can, but that's beside the point). Suddenly, a mysterious bruise wasn't just a bruise, but an early sign of leukemia. And, had I been feeling tired lately? Man, I was feeling really sleepy. To me, the fact that I spent most of my first year of college up until 5 a.m. with my roommate didn't explain the fatigue as well as cancer did. Sure, I'm a rational person. I knew then that I probably didn't have a brain tumor, or cancer — but it's easy to justify just about any trip to the doctor with, "Better safe than sorry."

As personal as it seemed to me, I was surprised to find that my impulse to pull out my phone at 1 a.m. and search things like "weird feeling in front of throat when breathing but not really painful but uncomfortable cancer????" was something my friends understood. In fact, in almost every scenario, when I described a symptom and the terrifying possibilities of its origin, a friend had a similar story to tell me.

But even the fact that I had these friends who had all Googled, been scared and then, ultimately, totally fine didn't erase the fact that I knew a cousin of a friend who had a sister who once thought she just had a cold, but it was actually an early sign of breast cancer and IS THAT A LUMP? We all love to sit around and talk about the horror stories — about these people that we know of, but aren't emotionally attached to, who had sudden, shocking diagnoses. Whether it's the sensationalism of it, or simply the emotional distance that makes it easy to talk about, we've probably all had similar conversations. And they feed into all of our fear that we, too, secretly have something going wrong inside of us. For me, the internet takes that social phenomenon — that discussion — and amplifies it by about 50,000. According to the eBusiness October 2016 ranking of the most popular health websites, WebMD was ranked number one — with an estimated 80 million unique monthly visitors. So odds are even if you're not constantly worried about contracting a rare disease, you've probably checked out your symptoms at some point, too.

Take the handy symptom checkers which have driven probably all of us, at one point or another, to thinking we are on death's doorstep. We go from slight nausea to "I wonder who would really come to my funeral" in about 15 seconds. Type in "upset stomach" in one of the most popular sites, and you'll get this list of possibilities: "Indigestion, gastritis, gastroenteritis, irritable bowel syndrome, peptic ulcer, generalized anxiety disorder, giardiasis." If you're wondering what giardiasis is, by the way, it is also called "beaver fever." Anxiety and beaver fever are pretty far apart on the health spectrum, but hey, why worry about anxiety or your basic case of IBS when you could have something called beaver fever?

The thing is, though, that these symptom checkers are rarely accurate. According to a study by Harvard Medical School, which tested 23 symptom checkers, only 34 percent provided the correct diagnoses on the first try. While these are important statistics to know, it doesn't really change my impulse to Google symptoms to begin with. To some, worrying about the .004 percent chance that you could have a rare disease is irrational. But to me, it makes sense. To me, emotionally preparing for being diagnosed with beaver fever is probably more beneficial than ignoring the possibility altogether in the off chance that you do, in fact, have beaver fever.

For me, worrying about having some rare disease is a way to maintain control when so many things in life are out of my control. That may sound backwards, but all these symptom checkers — all the being up at 4 a.m. on my phone trying to figure out if my eyes are just blood shot because I'm tired and it's 4 a.m. or because I'm slowly going blind in one eye and will have to wear an eye patch soon — give me concrete possibilities of what might be wrong with me. They may not be 100 percent correct, but at least they're giving me a grasp of the worst case scenario. If I know that, then I can handle it. The not knowing is what I'm not as OK with.

When I'm consumed with worry about a meeting at work or a fight with a friend, there's no app I can open. There's no symptom checker to plug my anxiety into and get a play-by-play of the worst possible outcome. There's no level of control there, because the outcomes of any of those situations, even though they're almost always mundane, are unpredictable. That's scary for me. But at least I know that, even in the worst possible scenario, this slight nausea I feel is something with a name, a definition, a page in a textbook. A corresponding set of treatments. A built-in game plan. Because, no, I don't know where my next apartment will be. I don't know if I'll ever be able to save enough for retirement. I don't know who'll be elected president. I don't know where I'm going to be in the a few years at all, and, therefore, there's no big plan in how to get there. I'm OK with that some days, and others not so much. In the meantime, I try to focus on what I can control and let go of what I can't. And, hey, if that ever means developing a treatment plan for beaver fever, I'll be ready.