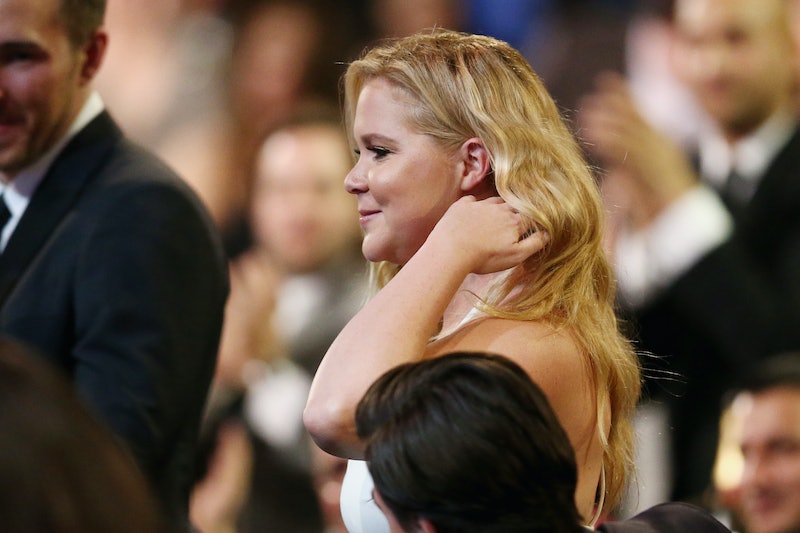 By the time you go to the trouble of looking up comedy show dates, paying for a ticket, and actually showing up on the night of the show itself, I would assume you a) know a decent amount about the comedian you're going to see and b) like them a little bit. Which is why I'm so surprised to hear that offended Donald Trump fans walked out of an Amy Schumer show. It's not even that I'm surprised they were offended; Schumer has never been shy about sharing her full-blown, honest opinion on literally any topic and openly doesn't care what anyone thinks of her. I'm more confused about how these 200 Trump fans made it all the way to her show without realizing how she felt about their candidate. See what I said about "sharing her full-blown, honest opinion."

Update: On Tuesday, PEOPLE reported that Amy Schumer read an open letter to the audience members who walked out of her Tampa Bay show during her show at Madison Square Garden in New York City. It read:

“Dearest Tampa, I’m sorry you didn’t want me, a comedian who talks about what she believes in, to mention the biggest thing going on in our country right now. How could I think it was OK to spend five minutes having a peaceful conversation with someone with different views?”

Earlier: At a Oct. 16 show in Tampa, Florida, The Tampa Bay Times reports that Schumer launched into her political material about halfway through her set. She has been a vocal proponent of gun control ever since a shooting during a screening of her movie Trainwreck in 2015 killed two women in Louisiana, and has been liberally sprinkling I'm With Her hashtags throughout her social media postings for months. On top of that, Schumer has been sporting a Hillary Clinton t-shirt while helping people register to vote, and recently revealed her own history with sexual assault, with the release of her book The Girl with the Lower Back Tattoo.

Even from the perspective of someone who hasn't even been lucky enough to attend one of her shows, I can think of a bunch of reasons off the top of my head why Schumer might have issues with a Trump candidacy — and work political jokes into her comedy sets.

True to form, during Sunday night's show, she didn't hold back, referring to Trump as an "orange, sexual-assaulting, fake-college-starting monster" (Donald Trump has denied all sexual assault allegations against him, and has denied any wrongdoing in the case of Trump university, claiming via a 2016 statement from his lawyer that the case "has no merit") and asking if any audience members were willing to come up onstage to try to explain what they liked about the Republican candidate. One man took her up on the offer, and, when he revealed that his main impetus for voting for Trump was a lack of trust in Clinton, some audience members erupted in a chorus of boos. Schumer promptly instructed security to help those unhappy few booing find their way to the exits.

Ultimately, the number of Trump supporters who left was relatively insignificant compared to how many people the Amalie Arena holds (approximately 200 people vs. roughly 20,000). The Times reports that people who left didn't said they begrudge Schumer her opinions, but just didn't appreciate how intertwined her politics and comedy were at that particular show. In the words of Bryon Nfinger, one of the people who left: "I don't want to hear that. We wanted to have a good night without distractions with the politics."

OK, sure, I guess. But here's the thing about that. I get wanting to keep those things separate, but this show took place in mid-October in an election year, and was delivered by a sexual assault survivor who has endorsed the Democratic nominee, advocated stronger gun laws, and never played coy about her opinions a day in her life. What did they expect? If we aren't talking about it right now, when are we going to talk about it?

Schumer's comedy is about commenting on the world around her, with sometimes brutal honesty. Trump's inappropriate comments, controversial campaign, and candidacy for President are all things that are very much going on in the world in this moment. To her credit, the comedian didn't let the walk-out shake her, which is great. Those Trump-supporting audience members don't have to sit through a show that they were plainly not enjoying, and Schumer doesn't have to endure their heckling. Everyone wins.